Students are demanding compensation for missed lessons as lecturers begin the biggest ever strike by university academics in UK history.

Starting today, tens of thousands of lecturers at 64 universities across the country will participate in waves of walkouts lasting until 16 March.

Members of the University and College Union manned picket lines outside dozens of universities across the country this morning, The Guardian reports.

More than a million students are expected to miss out on around 565,000 hours of teaching as a result of the walkout, says the Evening Standard, which began after talks broke down between universities and union officials in an ongoing row over pensions.

Thousands of students have reportedly signed petitions demanding compensation from universities for their missed lectures and classes.

The dispute is rooted in proposed changes to the Universities Superannuation Scheme, which manages the pensions of academics working in UK universities.

Cash-strapped universities say they cannot continue to pay into the generous scheme, which is already in a £6.1bn deficit, the Financial Times reports.

They want to change the system from a defined benefit scheme – in which recipients are guaranteed a set percentage of their salary as a pension – to the more common defined contribution scheme, in which payouts are based on pension contributions.

However, the UCU, which represents those working in higher education, say the reforms would leave the average lecturer £10,000 worse off per year after retirement.

UCU general secretary Sally Hun, said that the scale of the “unprecedented” industrial actions “reflects just how destructive the proposals would be for staff pensions”.

Manchester University lecturer Dr Gregory Lane-Serff told Sky News that it the decision to go on strike had been “hard”.

“It’s not what any of us come into this business for,” he said. “But we think universities have a lot of money to fund our pensions. They’ve been taking a lot of money in tuition fees but they’ve been spending less and less on staff.”

The UCU says it is prepared to continue staging industrial action until the end of the academic year in July, a scenario which would affect teaching in the run-up to exam season.

“If further disruption is to be avoided, university leaders must put further pressure on their representatives to get back to the table for meaningful discussions with UCU,” Hunt said. 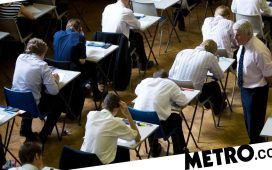