In the last one week, Nigeria’s power sector has been swimming in controversies over the removal of the immediate past Managing Director of the Transmission Company of Nigeria (TCN), Mr. Usman Gur Mohammed. TOPE SUNDAY reports.

On May 19, 2020, Minister of Power, Engr. Sale Mamman, sacked the Managing Director of Transmission Company of Nigeria (TCN), Mr. Usman Gur Mohammed. Though, no reason was adduced for his removal, a statement issued by the minister’s Special Adviser, Media & Communications, Aaron Artimas said his ouster was part of the ‘reorganisation going on at the company’

Also, the minister announced the appointment of Engr. Sule Ahmed Abdulaziz as the acting TCN’s MD and confirmed the appointments of four executive directors who had previously served in acting capacities.

As part of continuing measures to reposition and improve the performance of the power Sector in the country, the Honorable Minister of Power Engr. Sale Mamman hereby announces major changes at the Transmission Company of Nigeria.

“Accordingly, the Managing Director of the TCN, Usman Gur Mohammed has been removed from office with immediate effect. He is being replaced with Engr. Sule Ahmed Abdulaziz, as Managing Director, in acting capacity.

“The Honorable Minister has also confirmed the appointment of  directors who have been on acting position in the company for some time.

“All the changes/ appointments have been approved by President Muhammadu Buhari”.

Few hours after the sack and appointment of former and new acting TCN’s MD, members of the in-house unions at TCN,  the Senior Staff Association of Electricity and Allied Companies (SSAEAC) and the Nigerian Union of Electricity Employees (NUEE) expressed thier support for and against the development. While SSAEAC members were in support of the removal of Mr. Usman Gur Mohammed, NUEE members kicked against it on the premise that the process leading to his ouster was faulty.

READ  A Daily Trust in the Media, not the Army

The development, however, snowballed into protests as they held the Power House, which houses TCN and Federal Ministry of Power for hostage for hours.

The NUEE members were said to have down their tools in protest for the sack of the immediate past MD but the national body of SSAEAC commended President Muhammadu Buhari for edging him out.

Blueprint also gathered that the former MD had good working relationship with NUEE members but allegedly had issues with SSAEAC members.

A member of SSAEAC told this medium that his members broke the gate of the Power House building to resume duty, saying that they were not on strike.

The SSAEAC national body in a statement issued by its General Secretary, Umar A. Dubagari, described the removal of the immediate past MD of TCN as a welcome development, and vowed to press for his investigation and prosecution.

“The atrocities of this man are numerous and have just been cut short ignominiously, to the relief of the sector. We shall be pressing for his investigation and prosecution.

“It was a removal of disorder, arrogance, insubordination, impunity and tumoil in the sector as characterized by his tenure since Feb 2017.

“All Nigerians should therefore look forward to improved services in TCN since workers are liberated from the fear stranglehold of the man aimed at personal gains”, the union said.

But the TCN branch of NUEE, last Wednesday, during the barricade of the corporate headquarters of the Ministry of Power and TCN over the removal of Mr. Mohammed, demanded his immediate return to office.

Also, a coalition of 21 stakeholder-civil society groups from the National Power Sector Stakeholders’ Forum, NPSSF, urged the President to recall the sacked TCN boss, describing his removal as beyond the jurisdiction of the Power minister.

Amidst the controversy surrounding his appointment, the newly appointed acting Managing Director of the Transmission Company of Nigeria (TCN), Engr. Sule Ahmed Abdulaziz on Wednesday, May 20, 2020 resumed duty.

Also, the ag. MD also met with the minister of power, who admonished him on how to take the sector to an enviable height.

But barely a week after Mr Usman Gur Mohammed’s removal, the Secretary to the Government of the Federation, SGF, Mr. Boss Mustapha, the Chief of Staff, COS, to the President, Prof. Ibrahim Gambari, and organised labour, are now enmeshed in hostility over his sack.

In what appears as the SGF’s fragrant disagreement with Mohammed’s sack, he  released a circular on what the official procedure for the removal of heads of public agencies in the country should look like. This development had veiwed by power play in the power sector as response to the sack of the TCN boss without his consent.

Mustapha, in the circular, tagged Mohammed’s removal as “arbitrary” of chief executive officers, CEOs of government agencies and parastatals “given the attendant impact on the stability and service delivery of the agencies.”

According to him, no minister had the powers to unilaterally remove CEOs of agencies without going through the disciplinary procedure approved by the President for erring heads of agencies.

“When an act bordering on serious misconduct against a chief executive officer is reported, it shall be the duty of the supervising minister through the permanent secretary to refer the matter to the governing board for necessary action. The board shall, in line with due process, issue him/her a query requesting an explanation with respect to the specific act(s) complained about; the board shall forward its findings and recommendations to the minister for further consideration and necessary action; upon receipt of the submission from the minister, the Secretary to the Government of the Federation shall without delay cause an independent investigation and advise Mr. President on the appropriate course of action.”

Some other reports have also alleged that Mr. Mohammed’s sack was over his involvement in the $2 billion Siemens Presidential Power Initiative, PPI, scandal.

In a swift reaction to the SGF’s circular, the Senior Staff Association of Electricity and Allied Companies, SSAEAC, in a letter dated 23rd May, 2020, and addressed to President Muhammadu, threatened to go on strike should the former TCN MD be restored. Also, the union queried the SGF’s circular, saying it was an attempt to make ‘minister helpless’.

The union’s letter, which was signed by its general secretary, Umar Abubakar Dubagari, reads: “Sir, it is then shocking to us to see the above Circular under reference that seemed tailored to restore him (U. G. Mohammed) to the office that has been occupied by another appointee, to the relief of the workers of TCN and sector operators.

“Some questions to raise with the SGF‘s  Circular are:

1. Why would the Circular be issued on the same date that Your Excellency approved the removal of U. G. Mohammed?

2. Why was the Circular about Chief Executive Officers some of who do not follow laid down procedures to terminate or punish in establishments they head?

3. Why did the Circular seem to make the Ministers helpless and dependent on SGF to act in the Ministries?

4. What happened to earlier presidential directive on Ministers going through your Chief of Staff?

“Your Excellency is hereby notified of pending labour action by our union and Trade Union Congress (TUC) in the unlikely event that the (Boss Mustapha’s circular restores UG Mohammed to TCN and if the wrongful termination of our president is not reversed immediately”.

Now that the SSAEAC and NUEE members are threatening industrial action over the recent development in TCN, will power sector not suffer greatly if any of the duo blinks first?

Why Buhari didn’t deal with Fayose, by Adesina 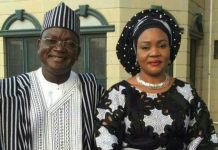