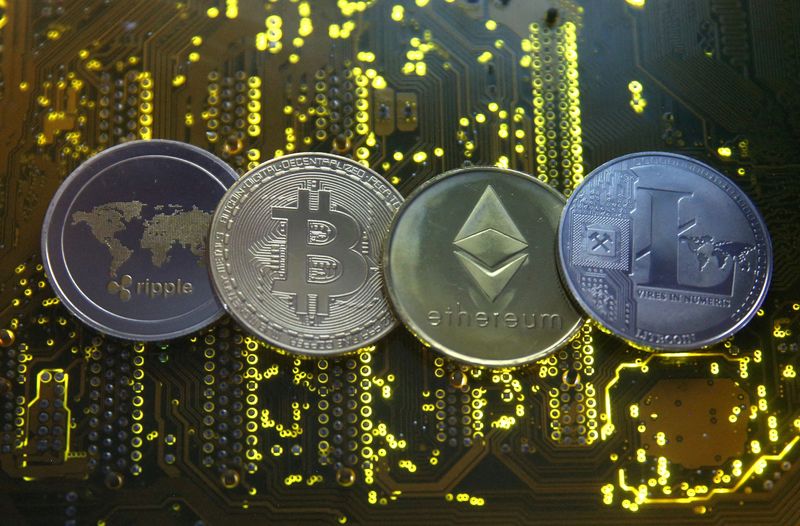 © Reuters. FILE PHOTO: Representations of the Ripple, Bitcoin, Etherum and Litecoin virtual currencies are seen on a PC motherboard in this illustration picture, February 14, 2018. REUTERS/Dado Ruvic/Illustration

By Herbert Lash and Sujata Rao

NEW YORK/LONDON (Reuters) – The dollar rose to a two-week high on Monday against a basket of currencies, lifted by rising geopolitical risk over Ukraine and a likely hawkish stance from the Federal Reserve at its policy meeting this week.

Markets until recently had mostly shrugged off the massing of Russian troops on Ukraine’s borders, but tensions have ratcheted up lately. NATO said it was putting forces on standby and reinforcing eastern Europe with more ships and fighter jets, in what Russia denounced as an escalation of tensions.

“Given people have lost money, whether it’s in crypto or the stock market, people want to find a culprit and I think that people are torn between two possible candidates: the Federal Reserve and Russia,” said Marc Chandler, chief market strategist at Bannockburn Global Forex.

“I’m skeptical that all of this is Russia driven,” Chandler said, referring to the sell-off in equity markets. “But it doesn’t mean when the first shots are fired, there won’t be a dramatic market reaction.”

ING Bank strategist Francesco Pesole said markets were pricing more of a risk premium into the euro, with fears increasing that Russia’s stand-off over Ukraine with the West could prompt Moscow to curb energy supplies to Europe.

The euro also lost ground against the safe-haven Swiss franc, falling to 1.0298 at one point, the lowest since May 2015. But the single currency later traded up about 0.04%.

Another safe-haven currency, the yen, earlier firmed a bit against the dollar, but later weakened 0.01% versus the greenback at 113.69 per dollar.

The dollar index has gained some 1.5% since Jan. 14. During this period, several banks have raised forecasts for the speed and size of the Fed’s policy tightening, a picture that should be clearer at the end of its two-day meeting on Wednesday.

The Fed is expected to signal the start of interest rate hikes in March, while potentially indicating how fast it will shrink its holdings of Treasuries and mortgage debt that have swollen its balance sheet past $8 trillion.

Data showed on Friday speculators cut net long positioning on the dollar to the lowest since September and instead added a net $2.6 billion of euro positions.

Leaving aside Ukraine tensions, the dollar’s recovery could stall if the Fed signaled a preference for balance sheet reduction as a means to tighten policy, Pesole said.

“If markets see the Fed willing to let balance sheet reduction do the heavy lifting, that may force a scaleback in forecasts for the number of rate hikes,” he said.

“The dollar will find more support from actual rate hike expectations than expectations of draining liquidity out of the market.”

The was one of the few to withstand dollar gains, touching the highest since May 2018 at 6.324.

With China’s central bank in rate-cutting mode and property sector concerns easing, flows to Chinese markets have picked up, especially into government debt.

It traded as low as $32,967, while ether, the world’s second-largest cryptocurrency, slipped to around $2,244, the lowest since July.