Spending by British shoppers grew more than expected at the start of the year, putting an end to the longest retail sales contraction on record, according to official data.

The volume of retail sales, measured by value adjusted for inflation, rose 0.9 per cent in January compared to the previous month, up from an upwardly revised 0.5 per cent contraction in December, according to the Office for National Statistics.

January’s rise, which came in the wake of a decisive general result in December, was higher than the 0.7 per cent forecast by economists polled by Reuters and reversed a contraction that had spanned the previous five months, the longest period without growth on record.

The January “rebound” — which marked the fastest increase in sales since March last year — was built on “strong growth for most stores” said Rhian Murphy, ONS head of retail sales.

The rise “suggests that, by ruling out a no deal Brexit on January 31, December’s election result gave consumers the confidence to reopen their wallets” said Paul Dales, chief UK economist at Capital Economics

Excluding fuel, retails sales rose 1.6 per cent in January compared to the previous month, up from a 0.8 per cent contraction in December.

The rise in consumer spending has been supported by record-high employment rates, but growth prospects for retailers could be limited by slowing earnings growth and rising inflation.

My knight in shining armour | Letters

Carluccio's and BrightHouse collapse into administration 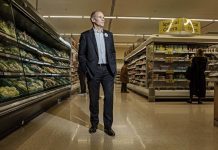 Person of the Year: How Dave Lewis fixed Tesco

Lockdown set to kill off thousands of pubs, restaurants and shops