British retail sales unexpectedly rose in April as shoppers bought more alcohol from supermarkets, suggesting people are reacting to rising prices by staying at home rather than going out.

The quantity of goods bought in Great Britain rose 1.4 per cent between March and April, partially reversing declines in the previous two months, according to data published on Friday by the Office for National Statistics. Economists in a Reuters poll had expected a 0.2 per cent drop for the month.

Martin Beck, chief economic adviser to the consultancy EY Item Club, said that while it was early days, April’s performance suggested “that the consumer sector may hold up against current headwinds better than some expect”.

However, some of the increase could reflect consumers staying in rather than eating and drinking out as a response to rising prices. Spending in restaurants, pubs and bars is not included in retail sales.

“April’s rise was driven by an increase in supermarket sales, led by alcohol and tobacco and sweet treats, with off-licences also reporting a boost, possibly due to people staying in more to save money,” said Heather Bovill, ONS deputy director for surveys and economic indicators.

The increase “could show a growing trend of consumers substituting their social spending patterns towards staying in to save more money”, said Simon Harvey, head of foreign exchange analysis at Monex Europe.

Earlier on Friday, separate data published by the research company GfK showed that UK consumer confidence fell to the lowest level since records began in 1974, as inflation jumped to a 40-year high of 9 per cent.

Samuel Tombs, economist at Pantheon Macroeconomics, also pointed out that the impact of April’s increase in both National Insurance contributions and energy bills had not fully emerged in the retail sales data yet.

“It won’t be until May’s data that we can assess how much of the resulting squeeze on households’ real disposable incomes has fed through to spending,” he said. 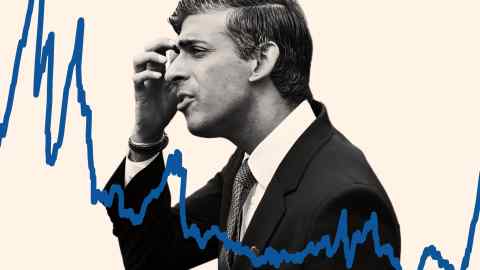 Clothing sales also had a strong month, especially online, with some retailers suggesting consumers were purchasing clothes for summer holidays and weddings. Despite the rebound, clothing sales remained below pre-pandemic levels.

Lisa Hooker, consumer markets leader at PwC, noted that non-food sales continued to slow this month, and were barely above pre-pandemic levels. In particular, “slowdowns in furniture and DIY reflect concern about investment in big-ticket items”, she noted. Household goods stores’ sales were down 0.5 per cent, with furniture shops registering a 2.4 per cent decline.

Compared with February 2020, shoppers had bought 4.1 per cent more goods but spent 13 per cent more — reflecting the effect of soaring prices on households’ finances.

Many economists think that households will tighten their belts in the coming months as prices continue to rise, possibly sliding the UK economy into a recession.

“Looking ahead, a recession will be avoided only if households borrow more or reduce their saving rate substantially in the second half of this year, given the severity of the squeeze on real disposable incomes,” said Tombs.