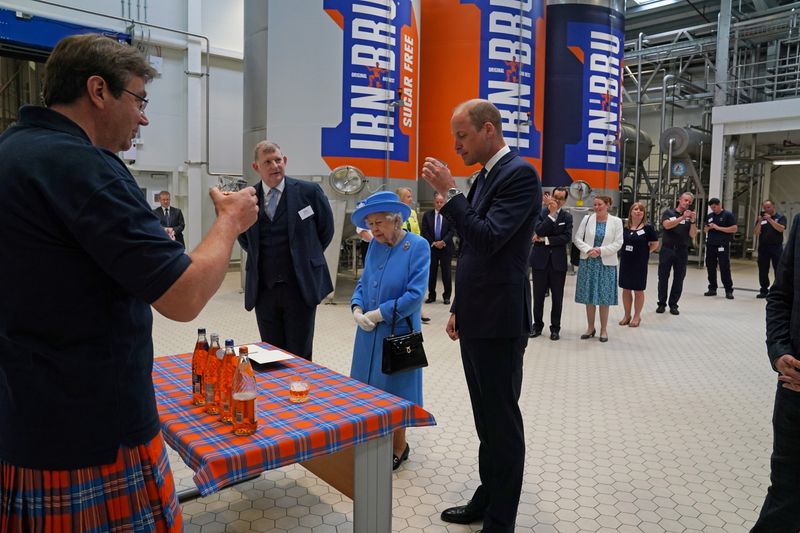 © Reuters. Britain’s Queen Elizabeth looks on as Prince William, Duke of Cambridge, known as the Earl of Strathearn in Scotland, tries Irn-Bru, during a visit to AG Barr’s factory, where the Irn-Bru drink is manufactured, as part of her traditional trip to Scotland

LONDON (Reuters) – Britain’s Queen Elizabeth kicked off a week of engagements in Scotland on Monday with a visit to the factory where they make the country’s favourite soft drink, Irn-Bru.

The 95-year-old monarch was joined by grandson Prince William for her first visit to Scotland since the death of her husband of seven decades Prince Philip in April.

The royal duo visited an AG Barr factory in Cumbernauld to officially open a new processing facility at a factory making Irn-Bru, the luminous orange fizzy drink which is more popular among Scots than Coca Cola.

William joked that you could “taste the girders”, a reference to the company’s tongue in cheek slogan, as he sampled some of the drink.

“I’m trying to guess what’s in it but that’s quite hard,” he said as he sniffed a bottle containing the essence of Irn-Bru. “It’s a closely-guarded secret.”

The queen’s visit has been portrayed in the media as part of a charm offensive to help persuade Scots to reject independence should the Scottish government go ahead with plans to hold a second vote on secession.

The monarch, who will stay at her official Scottish royal residence of Palace of Holyroodhouse in Edinburgh, will be joined by her daughter Princess Anne for events later in the week.

William and his wife Kate also undertook a tour of Scotland in May, and the Sunday Times newspaper reported earlier this month that Buckingham Palace aides wanted to build on their trip to help secure support for the union.

A Panelbase poll for the Sunday Times this week found that Scottish voters would back staying in the United Kingdom by 52%-48%, a reversal from recent surveys which had shown a majority backing independence.