Public sector workers who have already endured a decade of pay restraint will face new, real terms cuts in their wages next year, the UK chancellor confirmed on Wednesday.

Rishi Sunak said he could not justify “a significant, across the board pay increase for all public sector workers” when many in the private sector had lost jobs, been furloughed or had pay and hours cut.

Nurses, doctors and some other NHS workers will still receive a pay rise next year, and public sector workers earning below the national median wage of £24,000 will also receive at least an extra £250.

For the rest of the 5m strong public sector workforce — including teachers, police and civil servants — the government will “pause” headline pay awards in 2021-22, meaning that wages will not rise in line with inflation.

Robert Colvile, director of the Centre for Policy Studies — a centre-right think-tank that had argued for the public sector pay freeze — said the cut was necessary given the “enormity” of the fiscal challenges. But others argued that it would hold back the recovery and be unsustainable in the longer term.

“This is austerity plain and simple,” said Dave Prentis, general secretary of Unison, the public sector union, who said the pay freeze would be “a bitter pill for key workers”, a “disastrous mistake” for public services and a blow to the economy, because “extra money in pockets gets spent locally”.

The Treasury argued that public sector pay has risen in the past few years and is about 7 per cent higher than private sector wages once more generous pensions are taken into account. But Paul Johnson, director of the Institute for Fiscal Studies, said this pay premium had been eroded over the previous decade — and was largest for the low-paid workers who will be better protected.

“It’s among the highest skilled that the public sector underpays,” he said. 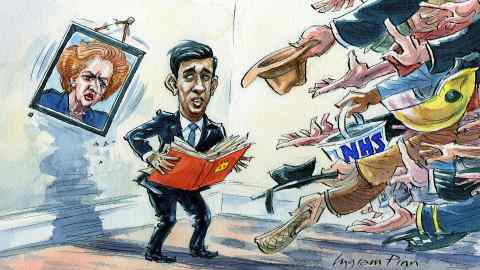 There was little good news for workers in the private sector either, with the chancellor announcing the smallest increase in the statutory minimum wage since 2013. The main adult hourly rate will rise by a meagre 19 pence (or 2.2 per cent) to £8.91 next April, reflecting the slowdown in overall pay growth, and business warnings that a bigger increase might lead to job losses.

Although unions condemned the government’s failure to press ahead with a more generous increase mooted last April, Hannah Slaughter, economist at the Resolution Foundation, said the wage floor was “rightly linked to typical earnings, which have taken a hit” and that the government was still on track to raise it to two-thirds of median earnings by the middle of the decade.

Although Mr Sunak said he was protecting those on lower incomes, he gave no sign on Wednesday that he was planning to extend the temporary measures taken earlier this year to make the welfare system more generous, with the £20 uplift to the basic rate of universal credit still set to expire in April, and the maximum amount of help on offer to private renters set to be frozen in cash terms.

“For all the government’s talk of levelling up, this spending review will level down Britain, hitting key workers’ pay and breaking the government’s promises to the lowest paid,” said Frances O’Grady, general secretary of the Trades Union Congress.