Thousands of British petrol stations ran out of fuel due to panic buying on Monday, after days of long queues at pumps caused by the lorry driver shortage. Analysts say that, in addition to Covid, the speed of the Brexit process bears a lot of responsibility for the crisis – signalling a broader problem in which the rapidity of Britain’s divorce from the EU is impairing the government’s plans to restructure the economy.

The UK’s lorry driver shortage reached a critical point on September 27 – as hoarding ran thousands of petrol stations dry and ample fuel supplies remained stuck in terminals and refineries, while the government suspended competition law on oil companies to try and ease the emergency.

The British government says the coronavirus was the biggest factor behind the crisis. Transport Secretary Grant Shapps told Sky News on Friday that Covid social distancing measures disrupting lorry driver training was the “main reason” for the shortage – not Brexit. Shapps noted that Germany and Poland are also short of lorry drivers due to the pandemic.

The Road Haulage Association’s figures suggest Shapps had a point about the coronavirus: The industry group says 40,000 lorry driver training tests were cancelled because of the repeated lockdowns in 2020 and early 2021.

“Clearly, the pandemic has had a negative effect on the supply of new drivers,” observed Jacob Kirkegaard, a senior fellow at both Peterson Institute for International Economics in Washington DC and the German Marshall Fund’s Brussels office.

However, seeing as the problem is far more acute in Britain than in Germany or Poland, many observers have pointed to Brexit as a significant cause of the crisis. Bolstering their case, the Road Haulage Association said that 20,000 European lorry drivers have left their jobs in the UK because of Brexit.

Before Brexit came into effect on New Year’s Day 2021, freedom of movement meant lorry drivers from the EU could just arrive in the UK and get a job. But as soon as the UK left the single market, new immigration rules made it harder for EU workers in low-pay sectors like lorry driving to move to Britain.

Brexit is “part of” the problem as well as “other factors” such as the coronavirus, added David Henig, a former British trade negotiator, now UK director of the European Centre for International Political Economy in Brussels.

“Some people driving lorry loads over from Europe no longer do that because of the barriers that have gone up [thanks to Brexit]; others returned home due to the coronavirus crisis,” Henig continued.

This temporary U-turn points to a snag in the Johnson government’s post-Brexit economic strategy of encouraging employers in low-wage sectors to train British workers and pay them more instead of recruiting inexpensive labour from abroad.

Indeed, as he denied any Brexit effect behind the crisis, the Transport Secretary Shapps pointed to a more long-term factor behind the current crisis, admitting that lorry drivers in the UK have been “underpaid” and suggested that higher wages are necessary in this job.

The Conservative Party has enacted a paradigm shift away from laissez-faire economic policy since the 2016 Brexit referendum – a change amplified by the Tories winning swathes of largely working-class northern English constituencies from Labour in the 2019 polls. “Levelling up” northern England’s economy with that of the more prosperous south is Johnson’s priority until the next general elections.

As well as more state intervention in the economy, Britain’s new, more restrictive immigration policy is a key part of this approach – aimed at encouraging higher wages by ensuring that supply of labour does not run ahead of demand.

This sea-change in economic policy follows a rapid implementation of a hard Brexit, driven by public fatigue over the interminable divorce saga: The cut-off from the single market came just over a year after Johnson’s December 2019 election victory, the moment it finally became clear that Brexit was a certainty.

But experts say the speed of the Brexit process undermines the Tories’ plans to create a new economic model – and that the lorry driver crisis demonstrates this par excellence.

In lorry driving as in other low-paid sectors, “it takes time and a lot of investment to create the skills and attractive conditions to develop the necessary domestic labour”, Fabry put it.

“The rapidity of the Brexit process is definitely an issue; people have been warning for a long while that after Brexit there wasn’t going to be enough time to train replacement drivers, pandemic or no pandemic,” Kirkegaard added. “British industry has been relying for many years on a lot of workers coming in particular from low-income EU members and as a result, British drivers haven’t been trained – but this was the wider British economic model for many years.”

Brexit did not have to contribute to a crisis like this; the problem was its precipitous implementation, Kirkegaard concluded: “There’s no doubt that people who said ‘we’re going to do Brexit but let’s not do it in a matter of months’ have been vindicated, because if Brexit is to have any meaning, it means a paradigm shift – and if you’re going to fundamentally alter your economic system, that takes years.” 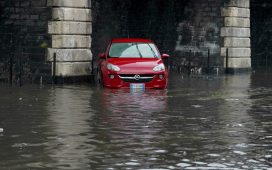