THE UK is in a very good position to lift the last round of lockdown restrictions, one expert has claimed.

On July 19 Brits are set to be free from the final set of rules, which had been due to be relaxed on June 21.

The new health secretary, Sajid Javid, will address MPs in the House of Commons this afternoon on the next lifting of lockdown measures.

After the Delta variant took hold in the UK, the government up-scaled the vaccine effort, with a bid to get every adult jabbed by July 19.

So far more than 44.3 million Brits have received a first dose of a jab with 32.4 million now having had a second.

One expert today said the rollout of vaccines could give us the protection we need to continue with “normal life”.

Professor Sir Andrew Pollard, director of the Oxford Vaccine Group, and chief investigator on the Oxford vaccine trial, said if levels of protection from jabs continue then we should be in a “very good position”, when asked about restrictions being lifted soon.

“We’re looking at the data that’s coming from Public Health England about the effectiveness of the vaccines and we’re seeing more than 90 per cent protection.

“If that persists as more and more data emerge, and we will get much greater certainty of those figures in the weeks ahead, then we reach a point where, with most people vaccinated with at least one dose and those at highest risk having two doses, it does put us in a very good position”, he told BBC Radio 4’s Today Programme.

Government ministers have consistently said restrictions will be eased based on “data not dates”, and this was one of the main reasons why restrictions could not be lifted this month.

The most recent infection data states that coronavirus cases in the UK were up by 60 per cent.

Deaths yesterday increased by 11, bringing the total since the beginning of the pandemic to 128,100.

A further 14,876 infections were recorded yesterday and the rise in cases means a total of 4,732,434 Brits have caught the bug.

It marks an increase of 60.2 per cent on last Sunday’s total of 9,284 amid concern over the spread of the Delta variant.

But infections fell slightly on Saturday’s figure of 18,270 – the highest daily figure since February 5.

Prof Pollard explained that while “data not dates” has been hailed, the decision would ultimately be made by ministers.

‘LIFE OF THE PARTY’

He said: “In the end it’s going to be a political decision about the timing of when those should end.”

He said a trial is under way to “test the system” of making vaccines against variants.

Sir Andrew said there is “no immediate urgency” around the Delta variant which has shown good levels of protection from vaccines, but added: “This is much more about being prepared for this quite testing variant, the South African one, and also future variants”.

He added that there should be data “very soon” on the immune responses from vaccines in mix and match studies.

UK daily Covid cases and deaths rise by HALF in a week with 15,810 new infections and 18 fatalities 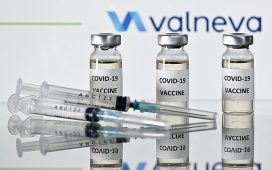 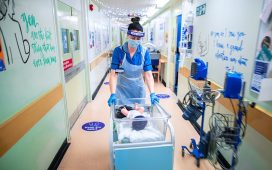 Over 100,000 of the most vulnerable people have not had third jab 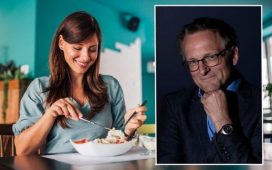