British health chiefs are now officially keeping tabs on a ‘stealth’ version of Omicron amid fears it may have spread to more than 1,000 people.

The UK Health Security Agency today marked BA.2 as a ‘variant under investigation’.

The category is reserved for variants that are spreading in the UK and are likely more transmissible and better able to evade vaccines than other strains.

It falls just one step below a ‘variant of concern’, a title listed for mutant lineages like Omicron, Delta and Alpha. But UKHSA bosses could still decide to place BA.2 in the highest category if the strain poses a greater threat.

Some 78 cases have been confirmed in the UK so far, but only a fraction of infections are checked for variants. It means the true toll could be ten times higher.

It carries many of the same mutations as Omicron, as well as other quirks that mean it can’t be detected almost immediately on PCR tests unlike the original Omicron. It is for this reason some have nicknamed it a ‘stealth’ variant.

Variant-tracking scientists said preliminary data suggests BA.2 could be even more transmissible than Omicron, although there is no reason to say it would cause more severe disease.

Dr Tom Peacock, one of the first virologists to raise the alarm over Omicron, poured cold water over concerns about BA.2, insisting it was unlikely to have a ‘substantial impact’ on the current wave.

But he warned it could still replace BA.1 – the original version of Omicron – over the coming months.

Around 8,000 cases have been detected globally, with the strain dominant in parts of India and the Philippines. BA.2 infections are also rising in Denmark and Germany. 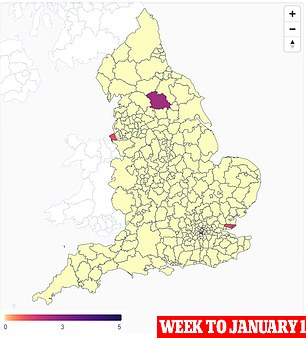 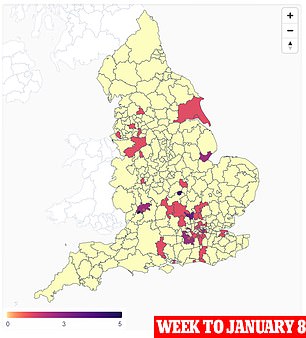 The above figures — from the UK’s largest Covid surveillance centre — show the locations where BA.2 has been detected in the UK 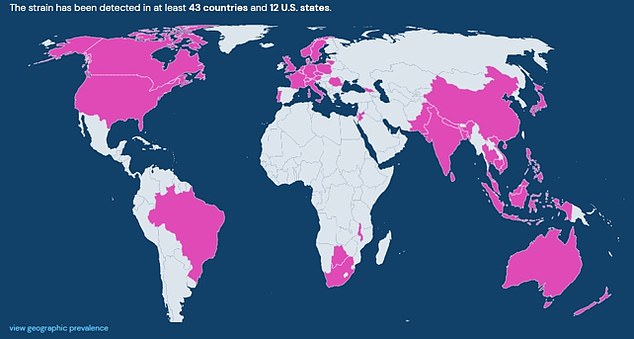 Pictured above are all the countries where BA.2 has been spotted. Cases are growing in Denmark, Germany and the UK, and it is already dominant in parts of India and the Philippines

Pictured above is the estimated number of BA.2 cases in the UK according to one of Britain’s largest Covid surveillance centres, the Sanger Institute. The UK is currently only checking about 10 per cent of infections for variants because of the large outbreak

What do we know about BA.2? Should we be concerned?

This is one of three off-shoots of the Omicron lineage.

It carries many of the same mutations as the original strain, which sparked panic over the world because of how transmissible it is.

But it also has a genetic change that has led some experts to nickname it the ‘stealth’ variant.

Britain’s explosion of Omicron was relatively easy to track because it has a mutation – a deletion of its spike ‘S’ gene.

This could be detected on PCR tests, and meant experts could roughly tell where the strain was spreading most because Delta, which was dominant before Omicron burst onto the scene, didn’t have this.

But this does not appear to be the case with BA.2, meaning samples must be rigorously analysed in laboratories to work out which version of the virus someone caught.

PCR tests will still spot if someone with BA.2 has Covid, however.

Is it more dangerous?

Early analysis suggests the sub-variant is slightly more transmissible than the original Omicron, which led cases to reach pandemic highs in Europe over the past month.

BA.2 is already the dominant strain in parts of India and the Philippines, scientists say, with cases now rising in Germany and Denmark.

But there is no evidence to suggest it is more likely to cause serious disease.

Should I be concerned?

Dr Tom Peacock, one of the first scientists to warn the world about Omicron, says there is no reason to be overly concerned.

The Imperial College London expert said he thinks the variant will not have a ‘substantial impact’ on the current wave.

Professor Francois Balloux, a geneticist at Imperial College London, says people not obsessed with Covid should treat it as the same disease as Omicron.

The UKHSA announced that they had classed BA.2 as being a variant under investigation in a tweet, but this was later hastily deleted.

The agency is set to reveal more details in its weekly technical briefing on the state of the variant situation across the UK. The report was due Friday afternoon but wasn’t published by the time that this story was written.

An offshoot of the Delta variant, which was dominant before Omicron burst onto the scene, is also on the UKHSA’s ‘variant under investigation’ list, alongside ‘Mu’.

The World Health Organization says there are three Omicron lineages (BA.1, BA.2 and BA.3), but only one (BA.2) appears to be outpacing the original strain.

Britain’s explosion of Omicron was relatively easy to track because it has a mutation – a deletion of its spike ‘S’ gene.

This could be detected on PCR tests, and meant experts could roughly tell where the strain was spreading most because Delta, which was dominant before Omicron burst onto the scene, didn’t have this.

But this does not appear to be the case with BA.2.

Samples are still rigorously analysed in laboratories to work out which version of the virus someone caught, however.

And PCR tests will still spot if someone with BA.2 has Covid.

Scientists have suggested, however, that there is no need to be overly concerned about the strain.

Dr Peacock, from Imperial College London, said: ‘I would be very surprised if BA.2 caused a second wave at this point.

‘Even with slightly higher transmissibility this absolutely is not a Delta to Omicron change, and instead is likely to be slower and more subtle.

‘That said, I would not be surprised if BA.2 slowly replaces (Omicron) over the coming months with a slightly more “optimised” mutations.’

He added: ‘Very early observations from India and Denmark suggest there is no dramatic difference in severity compared to (Omicron).

‘This data should become solid, one way or another, in the coming weeks.

‘I would also agree that there is likely to be minimal differences in vaccine effectiveness against (Omicron) and BA.2. It’s relatively likely.’

Professor Francois Balloux, a geneticist at University College London, said he would not treat BA.2 separately from Omicron.

‘I recommend to anyone not obsessed with (Covid) variant minutiae to consider both as “Omicron”, unless evidence emerged that there might be a meaningful (disease) difference between the two.’

UKHSA director Dr Meera Chand said an altered form of Omicron was not unexpected because viruses are constantly evolving and mutating.

She said: ‘Our continued surveillance allows us to detect them and assess whether they are significant.’

SAGE scientists have warned that another variant may emerge in the coming months that could be even more transmissible than Omicron.

Some expect the virus to mutate to spread quicker, but be less able to cause severe disease.

It came as the latest Covid surveillance showed cases are already rising among primary school children in England in what could be a sign of the back-to-school effect.

Statisticians at the Office for National Statistics estimated eight per cent of youngsters aged two to 11 had Covid on any given day in the week to January 15, the equivalent of one in 13, up slightly from 7 per cent the week prior. 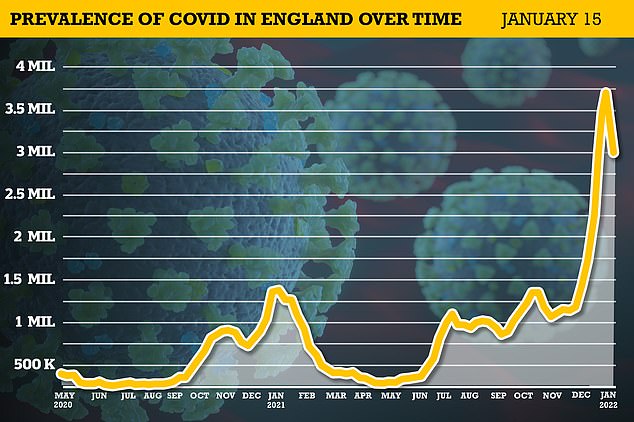 The rate, based on swabs taken from 160,000 people across the country, is the highest of all other age groups, with 20 to 34-year-olds having the next highest rate (one in 17).

While rates are falling or flatlining in every other age group they are still climbing in children. Just five per cent of under-12s were thought to have the virus a month earlier.

Children returned to classrooms on January 4 after a two-week break over the festive period.

Despite the rising infections in primary school and nursery-aged children, the ONS found that infections fell across England for the first time since Omicron took off last week.

It estimated around 2.9million people were infected on any given day in the week to January 15, a ‘welcome decrease’ from the record 3.7m the previous week.

The ONS survey is regarded as the most reliable indicator of the UK’s outbreak because it uses random sampling of around 100,000 people, rather than relying on people coming forward to be tested.

Dream-enactment disorder rose up to fourfold during pandemic, study finds

Zero by Jeremy Hunt review – this is going to hurt 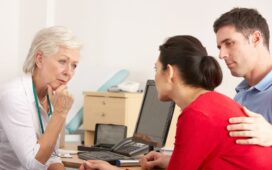 Ovarian cancer: Four key symptoms that 90 per cent of women are unaware of 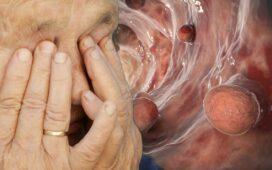 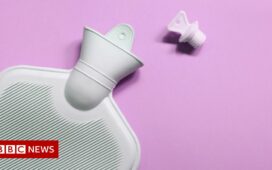 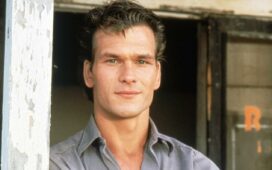 Could this revolutionary jab help destroy the cancer that killed Patrick Swayze? 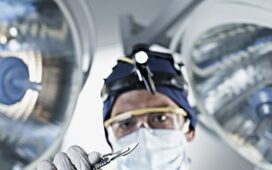 Tourette's syndrome: How a US surgeon beat the condition with his scalpel 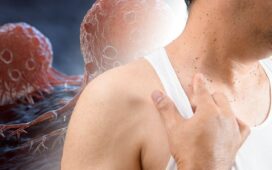