Homebuilders in England have been told by the government that they must agree to fund the replacement of unsafe cladding on mid-rise blocks in the wake of the Grenfell Tower fire.

UK housing secretary Michael Gove wrote to the “residential developer industry” to request that developers agree to “fund and undertake all necessary remediation of buildings over 11 metres that you have played a role in developing”.

An estimated £4 billion is required to fix dangerous cladding found on mid-rise blocks following the deadly Grenfell Tower fire in June 2017. The move means that this cost will not be paid by leaseholders.

“No leaseholder living in a building above 11 metres will ever face any costs for fixing dangerous cladding,” said Gove in a statement this afternoon.

Ministers had already allocated £5.1 billion of public money to pay for the remediation of flammable facades on high-rise residential buildings – defined in England as those taller than 18 metres.

Many thousands of leaseholders in blocks shorter than 18 metres had previously only been promised government help with costs in the form of a loan scheme.

The government has now scrapped this scheme and committed to the building industry funding cladding work on blocks between 11 and 18 metres – typically from four to six storeys.

In his letter, Gove threatened housebuilders with being shut out of public contracts and funding, subjected to planning powers or pursued through the courts if they do not agree to “a clear, fully-funded plan of action” by early March.

“I am prepared to take all steps necessary”

If the industry does not agree to fund the work the government could seek to legislate to force builders to pay.

“I am sure you are as committed as I am to fixing a broken system,” wrote Gove. “I want to work with you to deliver the programme I have set out.”

“But I must be clear, I am prepared to take all steps necessary to make this happen, including restricting access to government funding and future procurements, the use of planning powers, the pursuit of companies through the courts and – if the industry fails to take responsibility in the way that I have set out – the imposition of a solution in law if needs be,” he continued. 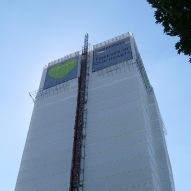 Grenfell Tower set to be demolished over safety risks

The government said it expects firms with annual profits from housebuilding of £10 million to contribute to the fund, but will make a final decision once talks with housebuilders have concluded.

That would cover significantly more developers than were subject to a levy brought in to raise £2 billion to soften the blow of cladding funding, which applies to around 30 companies with profits above £25 million.

“We will engage directly with government, but any further solutions must be proportionate and involve those who actually built affected buildings and specified, certificated and provided the defective materials on them,” said Stewart Baseley, executive chairman of developer trade body the Home Builders Federation.

“As well as developers and government, other parties should be involved in remediation costs, not least material manufacturers who designed tested and sold materials that developers purchased in good faith that were later proved to not be fit for purpose.”

Gove also told MPs that the government intends to amend the upcoming Building Safety Bill to protect leaseholders from the cost of fixing non-cladding safety defects, which have been uncovered at numerous blocks during facade inspections.

He also revealed that a new team has been set up within the Department of Levelling Up, Housing and Communities dedicated to pursuing companies deemed to have contributed to the crisis by misselling products, cutting corners in building work or seeking to profit from the fallout.

The government made no mention of a solution for blocks shorter than 11 metres – a small minority of which are implicated.

Flammable cladding has been identified by a public inquiry as the “primary cause” of the rapid external fire spread across Grenfell Tower, where 72 people lost their lives.

In the aftermath of the blaze, it became clear that hundreds of other blocks across the country had similar cladding systems to Grenfell – and it later emerged that numerous other types of combustible building facades also posed a potential threat, with the government recommending their removal.

This led to disputes as building owners sought to push remediation costs onto residents, leaving hundreds of thousands unable to sell and therefore trapped in homes deemed unsafe.

Ministers are now explicitly laying the blame for the scandal at the door of the housebuilding industry, with a government press release published today declaring that developers “must pay to fix the cladding crisis that they caused”.

It comes shortly before the Grenfell Tower Inquiry is due to examine the government’s role in the factors that led to the disaster.

The main photo is courtesy of Parliamentlive.tv.

Through the lens of Australian explorer Hubert Wilkins – in pictures

The illustrator who takes you places – in pictures

From Nightmare Alley to Let’s Eat Grandma: a complete guide to this week’s entertainment