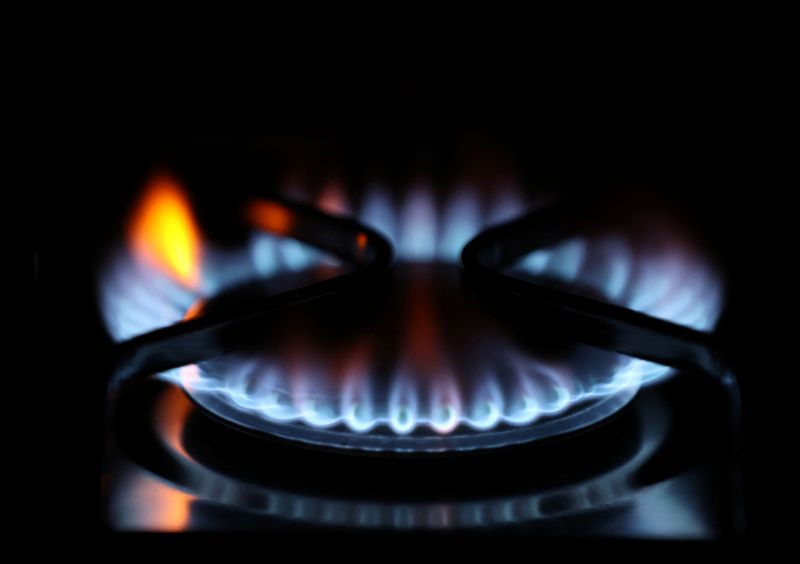 © Reuters. FILE PHOTO: Flames come out of a domestic gas ring of an oven in Durham, Britain, September 23, 2021. REUTERS/Lee Smith

LONDON (Reuters) – Britain’s government is considering plans to smooth a sharp rise in energy costs which is due to hit households in April, the BBC said.

Under a cost deferral mechanism, big banks would lend billions of pounds to energy companies, allowing them to spread the increase in gas bills over five or 10 years, the broadcaster reported.

Britain’s finance ministry could play a role by guaranteeing the loans to the energy firms.

Government officials were also considering using the Bank of England, which provided emergency loans to businesses during the coronavirus pandemic, to provide upfront funding, the BBC said late on Friday, without citing its sources.

Other options for the government to reduce the impact of the tariff hike – which could see bills rise by 50% after a surge in international energy prices – include an expansion of a discount scheme for low-income households or cuts to taxes on energy.

Prime Minister Boris Johnson is under pressure to act before an expected rise in the fuel price cap which is set to take Britain’s inflation rate to 6% or higher in April, when tax payments are also due to go up for workers and employers.

The cost-of-living squeeze is compounding the problems for Johnson, who is facing calls to resign from some members of his Conservative Party after revelations of parties in Downing Street when social mixing was restricted.