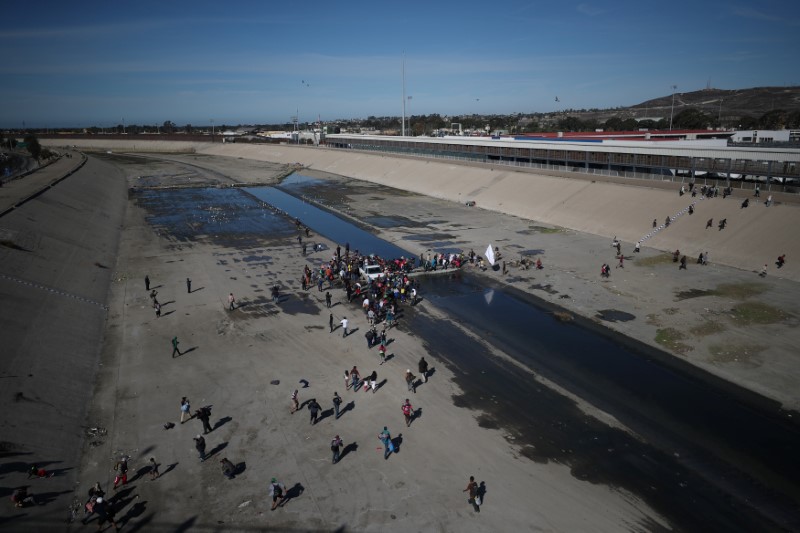 © Reuters. Migrants make their way to the fence between Mexico and the United States in Tijuana

TIJUANA, Mexico (Reuters) – The United States closed its busiest border crossing with Mexico on Sunday after Mexican police broke up a protest of Central American migrants massed in Tijuana, scattering some demonstrators toward the border where U.S. officers hurled gas canisters from the American side.

Traffic in both directions was suspended at the San Ysidro port of entry between San Diego and Tijuana, the U.S. Customs and Border Protection agency said on Twitter.

U.S. President Donald Trump has raised alarms about a caravan of Central American migrants as it approached the United States, with its members planning to apply for asylum on reaching the United States.

Tensions on the border had been rising in recent days, with thousands of migrants camped out in a sports stadium in Tijuana and hundreds periodically gathering near the main border crossing. The migrants have said they would wait there until they could request asylum, despite growing U.S. measures to tighten the border.

On Sunday, hundreds of caravan members, including women and children, were peacefully protesting when they were stopped by Mexican authorities, who told them to wait for permission.

As the morning wore on, and it became clear they would not get permission, people started to express frustration.

A small group broke off and headed a few hundred feet (metres) away to a part of a canal between Tijuana and San Diego that led to the border fence.

At that point, before the group had reached the border, U.S. Customs and Border Protest officers who had gathered on the other side of the fence launched canisters of what a Reuters reporter said felt and smelled like pepper.

Protesters were caught between the Mexican and U.S. authorities. A young woman fell to the ground unconscious, and two babies cried, tears streaming from the gas.

After running to relative safety a few hundred feet away, hundreds of the caravan members held a sit-in.

Later, immigrants again approached the border in groups and were met by a further volley of canisters emitting large clouds of gas.

Trump has deployed military forces to the border to support the Border Patrol and threatened on Saturday to close the entire southern border. But Sunday’s action affected only the San Ysidro crossing, the busiest port of entry between the United States and Mexico.

Trump also tweeted on Saturday that migrants at the U.S.-Mexico border would stay in Mexico until their asylum claims were individually approved in U.S. courts, but Mexico’s incoming government denied any deal had been struck.