Tyson Fury’s cutman Jorge Capetillo says the heavyweight was ‘p***ed off’ with Otto Wallin for pawing at his cut after the 6th round and trying to re-open the wound.

The Gypsy King was given a far sterner test than many had predicted beforehand, with a gruesome gash above his right eye causing serious issues from the third round onwards and prompting repeated checks from the ringside doctor.

Fury held his nerve to take back control of the fight and win on points and while he praised Wallin’s performance afterwards, he clearly wasn’t happy with some of the younger fighter’s tactics during the fight.

At the end of the 6th round, the Swede controversially pushed his glove into Fury’s face as they were being separated and the Brit was eager to make the ringside doctor aware between rounds.

Speaking about the incident to FightHype, Capetillo revealed: ‘He [Fury] was telling him [the doctor] that Otto was smashing his eye to open it and take off the Vaseline.

‘He p***ed him off because he told him like, “hey, he’s taking off my Vaseline”. But it’s part of the game, it comes with the territory.’

Fury’s trainer Ben Davison also made note of Wallin’s underhand tactic, writing on Instagram: ‘At the end of the 6th, Wallin should have been deducted a point for poking at the cut.’

Capetillo, who is not normally a cutman, was working with Fury for just the second time and was widely praised for the work he did in cleaning up the cut and stopping the flow of blood.

Asked how concerned Fury’s corner were, he continued: ‘Of course it was a concern. You try to do your best. I was trying to keep it clean, to apply the adrenaline, to seal with the Vaseline.

‘Sometimes I was having to put a lot of Vaseline because I knew that they could stop it. As soon as they see the blood falling off to the eye and he started losing the vision, I know it can be a problem. But thank God we stopped it.’ 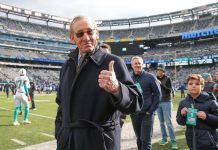 Dolphins' Ross: There will be football in 2020

Espanyol and Leganés will give fans free tickets for next season