The United States’ maximum pressure campaign has undermined the political agenda of the Iranian president in favour of his domestic adversaries, first and foremost Iran’s right-wing circles and the Islamic Revolutionary Guard Corps (IRGC). Founded as a political and military force, it is now a business empire. Amid the decline of Iran’s private sector, the civilian population is feeling the repercussions. Article originally published by Lobelog.

Tehran (AsiaNews) – In June 2017, Iranian President Hassan Rouhani said in a speech that “we have given the economy to a government that is armed with guns [that] nobody dares to compete with it.” Conspicuously, he failed to name which entity he was referring to. For many inside Iran, it was clear he was referencing the Islamic Revolutionary Guards Corps (IRGC) and their economic empire.

President Rouhani was elected both in 2013 and 2017 on a platform that threatened to challenge the IRGC’s economic dominance. However, the U.S. “maximum pressure campaign” has disrupted Rouhani’s political agenda and significantly altered the country’s economic dynamics in favor of the Revolutionary Guards’ monetary interests. With unilaterally imposed sanctions that seem to be tightening with each passing month, the United States’ campaign has undermined Rouhani’s political capital and further entrenched the IRGC’s financial power.

The IRGC’s economic rise in the licit and illicit sectors of Iran’s economy has been a decades-long process. During the reconstruction era following the devastation of the Iran-Iraq war, the IRGC established various bonyads (foundations) that quickly developed a myriad of agriculture, mining, transportation, and construction companies. Over the years, these companies have siphoned off contracts and projects away from a weak private sector that has lagged behind its regional counterparts.

In particular, the IRGC’s economic influence grew noticeably under President Mahmoud Ahmadinejad, who assisted IRGC-affiliated bonyads as they planted former IRGC officers onto company boards. While the Guards have many internal factions that at times run counter to one another, they were able to create an exploitable economic network during this period. These structures helped facilitate shady deals that enriched the IRGC and increased their market share in numerous commercial sectors.

The Guards were also entrusted with the responsibility of protecting Iran’s borders, leaving border posts and ports under their control. As a result, they developed a foothold in the smuggling trade that expanded year after year as Iran’s geopolitical isolation increased. While statistics on the IRGC’s involvement in the black market are unreliable, a 2007 estimate by an Iranian member of parliament suggests that the IRGC’s smuggling operations generated annual revenues of US billion.

The Rouhani administration’s attempts to roll back these gains initially bore some fruit. Following the signing of the Joint Comprehensive Plan of Action (JCPOA), Rouhani’s administration cracked down on the IRGC’s business networks and opened contract bidding to domestic competition. In one 2016 case, Commander Ebadallah Abdollahi, a crucial leader in the IRGC’s construction and engineering conglomerate, saw parts of a multi-billion dollar bullet-train project opened up to other private Iranian companies. By opening up previously closed sectors, such as construction, to competition, the administration was hoping to diminish the IRGC’s market share while at the same time bolstering a crippled private sector.

However, with the Trump administration’s imposition of an ever-tightening sanctions regime, hardliners inside Iran’s government have grown stronger. The same critics who argued the United States should not be trusted feel vindicated in their beliefs and have lambasted Rouhani for signing the JCPOA in the first place, undermining his administration’s efforts to curtail the IRGC’s involvement in Iran’s economic affairs.

President Trump’s designation of the Revolutionary Guards as a Foreign Terrorist Organization (FTO) in April 2019 compounded the decay of Rouhani’s leverage. Following the move, all members of Iran’s parliament wore the IRGC’s official uniform in solidarity with the organization. This included both reformists and moderates who have been vocal in their opposition to the Guard’s role in the country’s economic malaise.

Even more concerning is how the Iranian public has interpreted President Trump’s maximum pressure campaign. A September 2019 IranPoll/University of Maryland study found that 63 percent of the public think the IRGC should be involved “in construction projects and other economic matters…in addition to fulfilling its security and military responsibilities.” In the face of escalating pressure from the Trump administration, ordinary Iranians have not only rallied around the flag, but also rallied behind an institution many Iranians have traditionally seen as part of the country’s corrupt economic system.

While precipitating Rouhani’s political decline, U.S. sanctions have also created a lucrative economic environment for the country’s black market and have bolstered the IRGC’s illicit economic holdings. Iran’s Ansar Bank, which was sanctioned by the Obama administration in 2010, remained sanctioned even after the JCPOA was implemented for “providing financial services to the IRGC.”  The Trump administration escalated the bank’s isolation under more stringent authorities in March 2019 in an attempt to further limit the IRGC’s access to liquidity. According to a Wall Street Journal report, its records show that cash deposits have actually increased by 4 percent since the bank’s sanctions designation. In other words, despite the recent raft of sanctions, the IRGC’s economic base seems not only unaffected but growing.

Iran’s private sector, which has been crippled by rampant red tape, ineffective bureaucracies, and corruption writ large, have had their woes compounded by the sanction headwinds. As commercial prices rise, consumers are forced to turn to the black market for basic consumer goods. The IRGC has been under sanctions for decades—they have thrived under them. The U.S. sanctions regime, however, has decimated Iran’s private sector and forced them to cede more and more economic ground to IRGC affiliated companies.

Over the past four decades, the Revolutionary Guards has evolved from a military organization constitutionally barred from engaging in the economy into an economic conglomerate. As Iran’s private sector weakens and the public’s view of the IRGC softens, their influence will widen. The current policies of the Trump administration have in fact solidified this reality by fatally discrediting moderate forces inside Iran and strengthening the IRGC’s grip on Iran’s economy, exacerbating the country’s economic malaise for years to come.

*Shervin Ghaffari is a policy analyst at the National Iranian American Council (NIAC). 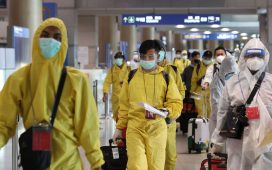