A Female staff  with  the Federal University, lafia, (FULafia)  Mrs. Angelina Tyem, was on Sunday found dead  in her private  residence in Lafia,  the Nasarawa state Capital  four days after.

The decomposed body of the slained senior staff of the Federal University was discovered  after a  thorough   search was conducted in lafia,  Nasarawa State Capital,

Tyem,  a senior administrative officcer with  the  institution  and a Women Leader of the Senior Staff Association of Nigerian Universities (SSANU), FULafia Chapter  had contested for the  Akwanga North  State constituency into the state house of Assembly  in  2019 general election under the platform of NNPP.

Vanguard gathered that the decomposed body of the deceased was found  around her  neighbourhood  in Sabon Pegi area of Lafia town, in the early hours of Sunday.

The ever busy Sabon Pegi area was thrown into confusion and state of panic  as  villagers, sympathizers  trooped in their number  to the   apartment of the  slained senior staff of the university  to catch a glimpse of the decomposed body.

When our Correspondent visited the scene, Security operatives including the  police were seen in the  area to  ensure that there was  law and order while sources  alleged that  the deceased was murdered by suspected   assassins.

It was further learnt  that,  few weeks ago, the slained  Tyem had survived an auto crash  along Akwanga-Jos road while whiting the same period,  assailants allegedly invaded her apartment in Lafia and carted away all her belongings.

A resident in  the area who  spoke on a count of anonymity told our correspondent  that “the deceased  body was  battered  indicating that  late  Tyem  was killed  by assassins.”

According to Ibrahim Shuabu, a colleague of the deceased,  “I just confirmed that for four days, they just discovered her dead body in her apartment this morning, this is really sad.”

Monday Seriki, chairman of SSANU, Federal University of Lafia Chapter, who visited the scene, said while responding to some questions from newsmen that the deceased was murdered, and that her car and phones were not found in the apartment.

“I was called this morning around 9.am that our women leader was found dead in her room, and that the neigbours discovered her dead body. That because she was meant to travel last Wednesday and so the neigbours thought she had travelled.

“We went there in the company of the police, I even have the pictures. We went inside the house and noticed that she was stabbed, she was murdered four days ago by unknown persons. Nobody knows the whereabout of her car and her phones. Right now, her body was conveyed by the University Ambulance to Sandaji Mortuary in Lafia,” Seriki stated.

When contacted, ASP Ramhan Nansel, police public relations officer (PPRO) who confirmed the incident however said “I am yet to get the full briefs, I will get back to you.” 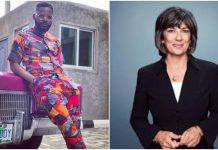 Falz speaks to CNN’s Christiane Amanpour on #EndSars protest in Nigeria, says he is not afraid to die