Danny Rose and Paulo Gazzaniga’s contracts with Tottenham Hotspur have expired, with the pair set to leave the club immediately.

A number of development players are also due to depart the north London side following the conclusions of their contracts.

Former England international Rose, 30, joined Spurs in 2007 and has spent several loan spells away from the Premier League club.

Rose played over 200 times for Tottenham all told, helping the club reach the Champions League final and playing the full 90 minutes in their defeat in Madrid to Liverpool.

He spent time on loan with Newcastle in 2019/20, but was omitted from Spurs’ squad throughout the entirety of 20/21 up until the expiration of his deal.

Goalkeeper Gazzaniga joined in 2017 from Southampton as a squad option, playing 37 times for the club in total. He spent the second half of 20/21 on loan at Elche in LaLiga.

In a short statement on the club website, Spurs thanked the pair “for their service and wish them well for the future”.

From the group of youngsters, Marsh made one first-team appearance and Sterling played twice.

Tottenham have yet to announce their new manager for next season, with Ryan Mason having seen out the campaign as interim boss after the sacking of Jose Mourinho. 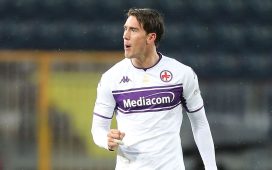