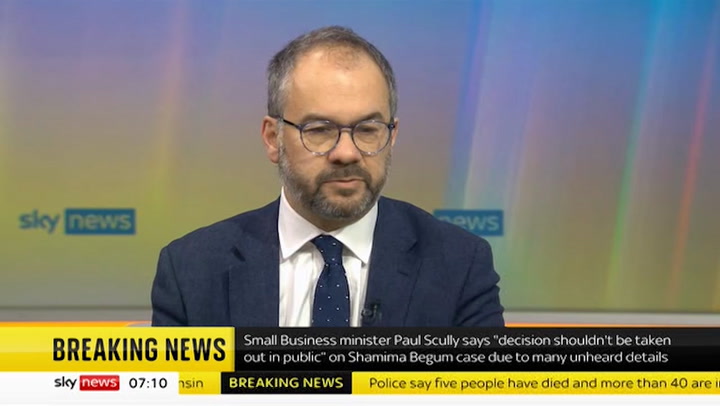 A Tory minister has been confronted with the accusation that Boris Johnson “tells lies to win an election” in a car crash interview.

Paul Scully was grilled for an excruciating six minutes on the PM’s broken promise that no one would have to sell their house to pay care home fees.

Despite Sky News host Kay Burley asking repeatedly, he refused to repeat the 2019 Tory manifesto – which vowed to “guarantee” that “no one needing care has to sell their home to pay for it”.

Tory ministers have since dropped the pledge – instead saying people will only have to sell up after they die, due to deferred payment rules.

Today Mr Scully admitted “I can’t tell you” exactly what different people will do in each situation when it comes to selling their home.

Yet when Kay Burley suggested the Prime Minister “was telling lies in order to win the election?”, he denied it.

Do you think the social care plans are right? Join the debate in the comments.

He also denied her suggestion it was “misleading, what the Prime Minister has been saying”.

Instead he claimed Boris Johnson had just been “boiling down a complicated message, which is why social care hasn’t been dealt with in at least 10 years, to something people could appreciate.”

He added “I think details are what’s important”, to which the Sky News host retorted: “The detail is you either have to sell your house or you don’t!”

Mr Scully replied: “But if we boil it all down to one line, then you get to a situation – you’ll never ever tackle a situation with social care.

“There’s a reason social care has not been sorted for 10 years – it’s because it’s complicated, it’s thorny, it deserves more than a single headline.”

It comes as Tory MPs are set to rebel tonight over plans to make a new care cap less generous for some of England’s worst-off people.

People will not have to pay more than £86,000 for care over their lifetime, regardless of wealth, from 2023 in England.

But for poorer ‘means-tested’ claimants, only the amount they actually pay themselves – not any state help they get – will count towards the £86,000 total.

The change will affect anyone with less than £100,000 in assets or whose assets could drop below the threshold before they hit the £86,000 cap.

That means poorer people with just over £100,000 in assets will take longer to hit the cap, and pay more than under the previous proposal.

Sir Andrew Dilnot, the architect of the original plans, warned: “For those with assets of less than £100,000 we’re not tackling catastrophic costs.

“We’re not tackling catastrophic costs for the less well-off, but we are for the better off.”

Sir Andrew told BBC Radio 4’s Today programme the original plans – which most people assumed would happen – would have given those people “much more protection”.

He added: “I don’t think it addresses the catastrophic costs for less well-off people. Less well off people, still if this amendment is passed, would face real catastrophe if they were one of the minority who face very large care costs.”

Labour research shows average homeowners in 107 constituencies in northern England will be affected – and none in the South.

Tory Christian Wakeford, MP for Bury South, said: “I’m not particularly happy with it… especially when one of the main messages for introducing this levy was ‘you won’t need to sell your house’.”

Andrew Percy, Tory MP for Brigg and Goole, said: “I’m very concerned of what I’ve seen. The whole purpose of this should be to protect the assets of those who have least.”