Children are more likely to be living in poverty than adults in the UK and Covid “has only made matters worse”, a Labour MP has said.

Stephen Timms MP, Chair of the Work and Pensions Committee insists the Tories do not have a plan to tackle child poverty and “no measurable objectives against which it can be held to account”.

His comments follow a new report published by the Work and Pensions Committee which aims to assess the impact of child poverty on a youngsters future.

MPs agreed poverty was at least partly about having insufficient material resources to meet minimum need.

But the Committee insists the Government now needs to commit to a comprehensive cross-departmental UK strategy for child poverty.

Mr Timms said: “If a generation of young people facing poorer educational outcomes and chronic health problems are to be lifted out of poverty, there needs to be clear leadership and a strategy driven from the top to ensure that every part of Government is focused on tackling the problems that they face.

“Ministers told us that they are focused on the absolute measure of poverty.

“But anyone who uses only one measure of poverty is missing out on the important information provided by the whole range of measures that DWP itself produces. We were concerned by the narrowness of their focus.

At the moment, the Government has no strategy and no measurable objectives against which it can be held to account. How can it hope to reduce child poverty when it doesn’t have a plan?”

Kevin Courtney, Joint General Secretary of the National Education Union, said: “Cuts of £20 a week to Universal Credit and the impact that this will have on families is also an issue of great concern.

“As the Committee highlights, most children in poverty are in working families. For these families, work does not provide a route out of poverty.

“The Government must #KeepTheLifeline this October and avoid causing immense, immediate, and avoidable hardship.”

And the Joseph Rowntree Foundation said that the scrapping of the £20 Universal Credit uplift, combined with the winding down of the furlough scheme, will plunge 500,000 extra people – including 200,000 children – into poverty. 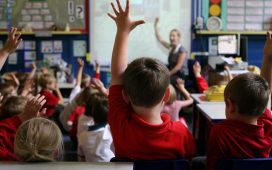