An excoriating Standards Committee report found Owen Paterson repeatedly used his position as an MP to promote two companies that paid him. He has vehemently denied wrongdoing and sought to implicate the probe over his wife’s tragic suicide

A Tory MP faces being suspended from the House of Commons for 30 sitting days over “egregious” breaches of ethics rules.

A standards report found Owen Paterson repeatedly used his position as an MP to promote two companies that paid him a combined £112,000 a year.

The former Environment Secretary breached four separate parts of the MPs’ code of conduct and brought the House of Commons “into disrepute”, the Commons Standards Committee found.

The breaches are so serious they caused “significant damage to the reputation and integrity of the House of Commons as a whole”, the report added.

Despite the mitigating factor of his wife’s tragic suicide in June 2020, the Committee recommended a 30-sitting-day suspension – which due to Commons calendars can run to several months.

The report found Mr Paterson made several approaches to the Food Standards Agency regarding Randox, a clinical diagnostics firm, and meat firm Lynn’s Country Foods – both of which paid him.

Mr Paterson has vehemently denied wrongdoing, insisting most of his approaches were allowed under rules that let MPs approach public officials to highlight a “seriously wrong or substantial injustice”.

In a statement today he sought to implicate the probe in his wife’s suicide, saying: “We will never know definitively what drove her to suicide, but the manner in which this investigation was conducted undoubtedly played a major role.

“Rose would ask me despairingly every weekend about the progress of the inquiry, convinced that the investigation would go to any lengths to somehow find me in the wrong.

“The longer the investigation went on and the more the questions went further and further from the original accusations, the more her anxiety increased.”

But today’s scathing report said: “No previous case of paid advocacy has seen so many breaches or such a clear pattern of confusion between the private and public interest.”

The Committee said it had addressed and rejected each of Mr Paterson’s arguments about how the inquiry was run. It added only one approach to the FSA in 2016 fell within the serious wrong exemption.

It went on: “This is an egregious case of paid advocacy. Previous instances have led to suspensions of 18 days, 30 days and six months.

“Each of Mr Paterson’s several instances of paid advocacy would merit a suspension of several days, but the fact that he has repeatedly failed to perceive his conflict of interest and used his privileged position as a Member of Parliament to secure benefits for two companies for whom he was a paid consultant, is even more concerning.

“He has brought the House into disrepute.”

Mr Paterson today issued a 1,458-word statement defending his actions and condemning how the “tortuous and inadequate” report was put together by the Commons Standards Commissioner.

He said the Commissioner “didn’t speak to me until after she had made up her mind”, which was “a biased process and not fair”.

He said: “I raised serious issues of food contaminated with unlawful carcinogenic substances, to protect the public. I did not gain any benefit, financial or otherwise, either for myself or for either of the two companies that I advise. Neither has any evidence of gain by those companies been suggested.”

He added: “I reject completely the findings of the Committee for Parliamentary Standards. The methods of the investigation do not create a just and fair outcome.

“Most importantly, not one of my 17 witnesses have been interviewed during the course of the investigation despite the passage of 24 months – not by the Commissioner, and not by the Committee.

“These highly reputable and reliable witnesses are the very people who say I am not guilty. What court, what work-place investigation, would ignore such evidence and call its procedures fair?”

The Standards Committee report said: “Mr Paterson’s allegations seem to us to spring from incomprehension that the Commissioner could place an interpretation on the rules and the evidence which differed from his own.

“A Member is entitled to contest, even vigorously contest, the Commissioner’s interpretation of the rules and her findings. We do not mark down any Member for doing so.

“It is, however, completely unacceptable to make unsubstantiated, serious, and personal allegations against the integrity of the Commissioner and her team, who cannot respond publicly.” 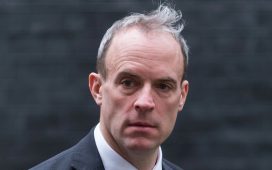