The Tory leadership debate heated up tonight as five contenders for Prime Minister faced their first clash on live TV.

But the frontrunner wasn’t there after Boris Johnson shamelessly chickened out of the Channel 4 showdown.

Without him there, the contenders to be the “stop Boris” candidate clashed over everything from Brexit to schools and the NHS.

Barring a massive upset, only one of Jeremy Hunt, Michael Gove, Dominic Raab, Sajid Javid or Rory Stewart will go up against Mr Johnson in a vote by Tory members.

And we’ll know who that is by Thursday as MPs whittle down the candidates from six to two later this week.

So what were the highlights from tonight’s 90-minute debate and what did we learn? Here are 9 things you need to know – and our ratings of how the candidates fared.

The flapping former Foreign Secretary who wants to be Prime Minister clucked off rivals by refusing to attend the 90-minute televised showdown.

And Channel 4 – which hosted the debate – left a humiliating empty podium for the contender.

Speaking moments before the debate kicked off, host Krishnan Guru-Murthy said there was “still time” for Mr Johnson to get a “taxi from North London”.

Jeremy Hunt unleashed a brutal attack, asking the audience: “We have been talking about Brexit for 25 minutes now and where is Boris?

“If his team won’t allow him out to debate with five pretty friendly colleagues, how is he going to fare with 27 European countries?

“He should be here to answer that very question.”

2. The candidates got shown up for trying to be like The Apprentice

With five suited men with a high opinion of themselves the contest already resembled The Apprentice.

And it plunged into a cringeworthy replica of the BBC show when the candidates were asked to name their greatest weakness.

Predictably they mostly tried to choose attributes that other people think are actually good. And boy, it backfired.

Michael Gove had the reddest face after he claimed it was “impatience” because he’s a “man in a hurry”.

Host Krishnan Guru-Murthy instantly turned the tables by asking if it was hypocrisy – since Gove admitted using cocaine despite preaching against drugs.

Mr Gove replied: “I made a mistake… We’re all frail and faulty. If you’ve… fallen short of high standards, you don’t lower the standards, you reflect on your mistake.”

Mr Raab said he was “restless to build a fairer society” – but he too had the tables turned on him when Mr Guru-Murthy asked why he’d called feminists “obnoxious bigots”.

In a bizarre comeback for a politician, whose job involves, erm, SAYING things in Parliament, Mr Raab said: “Judge us by what we do, not just what we say.”

Mr Stewart at least admitted having “a lot of weaknesses”, including being prone to changing his mind.

And Mr Javid admitted he was “very stubborn” and added: “If you want to be prime minister you need to be ready to listen.”

With his furious opposition to No Deal Brexit , Rory Stewart seems unlikely to make the final two candidates.

But he lapped up support from some vocal members of the Channel 4 audience who repeatedly applauded him.

And because he had the most distinct platform, the International Development Secretary stood out the most.

In one highlight he accused his rivals of engaging in a “competition of machismo” – to applause from the audience.

He said it reminded him of when he tried to “cram a whole series of rubbish bins” into a larger bin against his wife’s advice.

He said he wanted to say “believe in the bin, believe in Britain” but knew better. Mr Stewart added: “It’s nonsense!”

In fact, he was more or less the only candidate to give a decent answer to the question of his greatest weakness.

He said: “As Health Secretary I did have some very stubborn battles.

“And in particular in the battle I had with the junior doctors, I don’t think I was as good at communicating my vision as I should have been.

“They are wonderful people and that is the thing I learned from that. Be better at communicating what you want to do.”

To doctors who only last week won a breakthrough in their battle over 7-day contracts, this may well not be enough.

5. Michael Gove sprang to Sajid Javid’s defence over his heritage

There was a surprising moment when candidate Michael Gove sprang to the defence of Sajid Javid.

It happened when the conversation turned to Donald Trump’s state banquet during his visit to the UK this month – to which Mr Javid wasn’t invited.

Mr Guru-Murthy asked whether not being a “big enough figure” was his weakness.

Michael Gove chimed in: “Oh, that is ridiculous!… He’s a big figure. He’s come from the background he has to achieve so much. He doesn’t need an American President to recognise he’s an amazing guy.”

Mr Javid said pointedly: “I don’t think that was the reason I wasn’t invited to the dinner.

READ  'They want to cause chaos, frustrate Brexit'

“I don’t know what it was, but I said earlier on this stage, I’ve been used to being an outsider my whole life.”

Earlier, Mr Javid admitted he “knows what it’s like” to walk into a room as an “outsider” when he was asked if Britain was ready for a PM with Pakistani heritage.

He added: “The country is ready for anyone to be PM as long as they have the experience and talent to do the job.”

6. But they let rip against ‘dictator’ Dominic Raab over Brexit

Tory leadership rivals rounded on Dominic Raab over the possibility of proroguing parliament – to stop MPs blocking a no deal Brexit .

Four candidates savaged the former Brexit Secretary as a “dictator” over his threat to lock the doors of the Commons to ensure MPs can’t vote on the prospect.

The hard Brexiteer said: “I don’t think it’s likely but it’s not illegal.”

But the audience cheered rival Rory Stewart as he branded the plan “undemocratic, deeply disturbing” and saying it “strikes at the heart of our constitution”.

Joining the attack, Mr Gove said: “I will defend our democracy – and you cannot take Britain out of the EU against the will of Parliament.”

Mr Hunt said shutting Parliament would be a “profound mistake” and “wrong”, while Mr Javid also ruled it out.

Mr Raab hit back by saying Mr Stewart’s idea to let 50,000 ordinary people sort out Brexit through a “citizens’ assembly” was the “Venezuelan option”.

7. Nearly all of them think they can renegotiate Brexit

It’s telling that all five candidates claimed they can succeed in renegotiating Brexit, in some way, where Theresa May failed.

And yet, they were attacking each others’ plans as unworkable. Sound familiar?

Most said they would accept a No Deal situation if it was a choice between that and no Brexit at all.

Yet even Mr Raab, the hardest Brexiteer on the ticket, said he would ask the EU to renegotiate – asking them to agree the ‘Malthouse compromise’, a high-tech plan for the Irish border that has been panned by critics.

He claimed: “I’m the only one I believe who can be trusted to get us out by the end of October.”

Wearing a Union flag pin badge, Jeremy Hunt admitted: “Four people here are saying ‘we have to renegotiate a deal’ that will not go through parliament.”

But he also claimed it would be “fundamentally pessimistic” to claim you can’t negotiate anything at all new with the EU.

Michael Gove said he “believed in Brexit” adding in a reference to his fallout with David Cameron: “I put everything on the line, friendships and family, to be able to argue for it.”

READ  The Guardian view on Brexit options: this shambles is boosting support for a second vote | Editorial

“I’m saying I can get the European Union to change their approach,” he said.

He said “we cannot leave unless Parliament votes for it” and, addressing Mr Raab, he said no deal could not be pushed through “against the will of Parliament”.

Said Javid added: “The number one mistake that was made was not properly preparing for No Deal.”

Meanwhile Dominic Raab hit back at Rory Stewart by saying his option – calling up 50,000 ordinary Brits to sort out Brexit through a “citizens’ assembly” – was the “Venezuelan option”.

It all means we could be facing more deadlock come October 31.

8. We learned some of their OTHER priorities if Brexit is ever over

An audience member asked what candidates thought was the most urgent issue beyond Brexit that Britain needs to address.

Mr Raab said he wanted to improve “the opportunities for young people” and increase state school standards, offer more choices for young apprenticeships for 14 to 16-year-olds, and create non-graduate routes into professions like law.

Mr Hunt said he wants to “turbo-charge” the British economy and bolster the social care system.

Mr Gove said children were the priority, particularly those growing up in poverty.

“We need to make sure they have the opportunities that all of us enjoyed,” he said.

The Government should “look at the way in which tuition fees are levied”, he said.

Mr Javid said public services – with a focus on education – were his priority and he “relied” on them to rise to his position.

9. And finally… Never work with children, animals – or a live TV audience 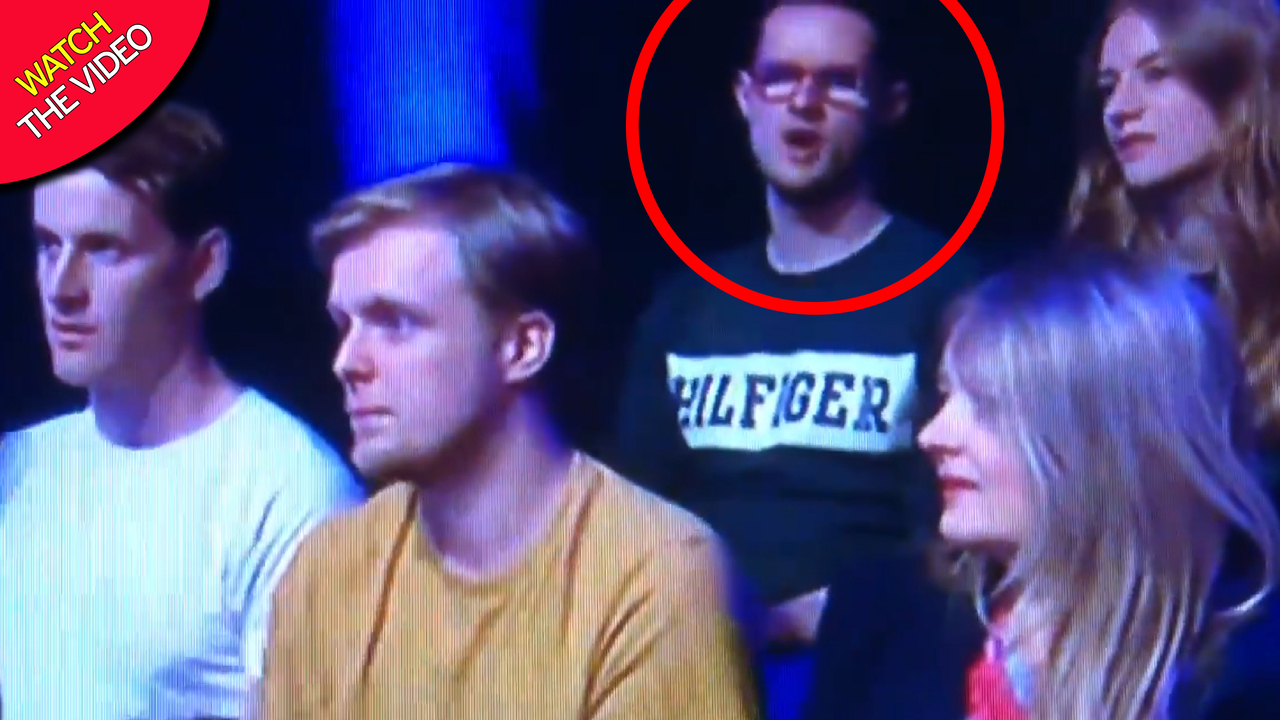 A man was spotted theatrically mouthing “bollocks to Brexit” in the audience for tonight’s Tory leadership debate.

The hilarious moment was captured and broadcast live to the nation on Channel 4.

A young man, wearing a Tommy Hilfiger t-shirt and glasses, made the silent pronouncement from the back row of the audience.

It came as a fellow audience member was asking the Tory leadership hopefuls to explain how they would re-unite a divided country.

Summary – how they fared

Did nothing to quash claims he would be “Continuity May” after nine yeas in Cabinet.

Seemed to be suppressing himself as he tried to maintain a forced grin and calmness.

Spoke the most sense but still sounded weird and his Brexit realism will alienate Tory grassroots.

Probably did most on the night to boost his chances but uses his hands way too much.

First to stare down the camera but his genuine air of authority comes across as patronising.

Who? Never heard of him, mate. Oh, you mean the one who couldn’t be bothered to turn up? Rubbish.

Keir Starmer warns PM: get a grip or risk second wave of coronavirus

The Guardian view on a Covid-19 parliament: unable to do its job | Editorial

Coronavirus: Discrimination row over MPs queuing up to vote

Analysis: Boris Johnson returns to face Sir Keir Starmer at PMQs after a torrid 10 days for the Government