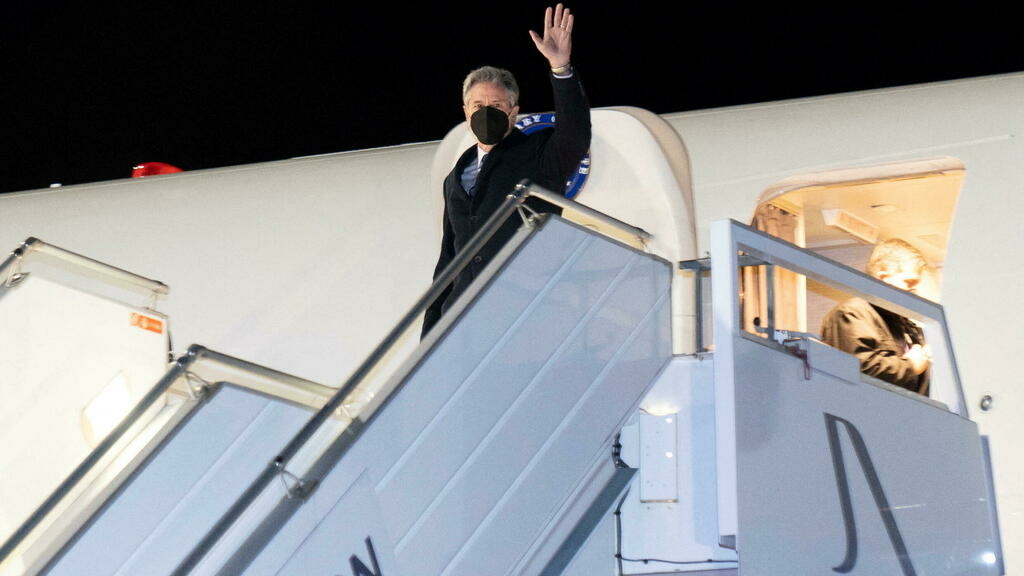 The top diplomats of Russia and the United States were to meet in Switzerland on Friday to discuss soaring tensions over Ukraine after a flurry of meetings between officials on both sides in the last week produced no breakthroughs.

U.S. Secretary of State Antony Blinken arrived in Geneva for talks with Russian Foreign Minister Sergei Lavrov following a swing through Europe to shore up U.S. allies’ commitments to hit Russia with sanctions if it goes ahead with an invasion of Ukraine.

Washington’s hopes of building a united front of opposition to Moscow were complicated by U.S. President Joe Biden‘s comments at a news conference on Wednesday in which he predicted Russia would “move in” on Ukraine and said Moscow would pay dearly.

Appreciative of the important opportunity to meet in Berlin with our European Allies about the ongoing Russia-caused crisis with Ukraine. We are all committed to supporting Ukraine and its people in the face of Russia’s aggressive actions. pic.twitter.com/ktEeejfDI3


Russia has massed tens of thousands of troops on its borders with Ukraine, and Western states fear Moscow is planning a new assault on a country it invaded in 2014 to annex the Crimean peninsula. Russia denies it is planning an attack, but says it could take unspecified military action if a list of demands are not met, including a promise from NATO never to admit Ukraine.

Kremlin spokesman Dmitry Peskov, asked about Biden’s comments, said Russia had been receiving similar warnings for at least a month.

“We believe that they in no way contribute to defusing the tension that has now arisen in Europe and, moreover, can contribute to the destabilization of the situation,” Peskov said.

In Kyiv on Wednesday Blinken sought to reassure Ukraine of U.S. support. Blinken, before meeting with German, French and British officials in Berlin on Thursday, said Russian President Vladimir Putin could order an invasion imminently.

Russia wants NATO to promise not to admit Ukraine as a member and halt its eastward expansion. The U.S.-led alliance has rejected that.

U.S. officials have played down hopes of concrete results from Friday’s meeting.

Blinken, repeatedly calling out what he called Russian “disinformation” aimed at destabilizing Ukraine, said on Thursday the diplomatic efforts this week meant he could represent a shared view of Western nations to Russia on Friday and press Moscow to step back.

“That unity gives us strength – a strength I might add that Russia does not and cannot match,” Blinken said. “And it’s why… I’ll be able to represent a shared view, a shared preference, on the part of the United States and our European allies and partners for finding a diplomatic path forward to de-escalate this conflict.”

But that unity appeared to be undermined by comments by Biden, who said on Wednesday that the West’s response may not be unified if Russia only makes a “minor incursion” into Ukraine. The comments forced administration officials to issue clarifications, but they raised doubts among U.S. allies that Washington was willing to give Putin some leeway to avert a full-scale invasion.

Ukrainian President Volodymyr Zelenskiy tweeted an apparent rebuke on Thursday, reminding “the great powers that there are no minor incursions and small nations. Just as there are no minor casualties and little grief from the loss of loved ones.”


Orysia Lutsevych, a Ukraine analyst at the Chatham House think-tank in London, said the Geneva meeting would give the United States the chance to clarify Biden’s comments.

“Hopefully Blinken will be able to straighten out some of this ambiguity, if he has the mandate,” she said. There was a “certain irritation” on the Ukrainian side that the West was not turning rhetorical support into more concrete action.

But in the separatist stronghold of Donetsk in eastern Ukraine, residents interviewed by Reuters said they were confident of Russia’s backing.

“I believe in Putin, he must help us, he mustn’t abandon us. We all hope so. I don’t know this Biden and I don’t want to know him, but I believe in Russia,” said a pensioner who gave her name as Tatyana.