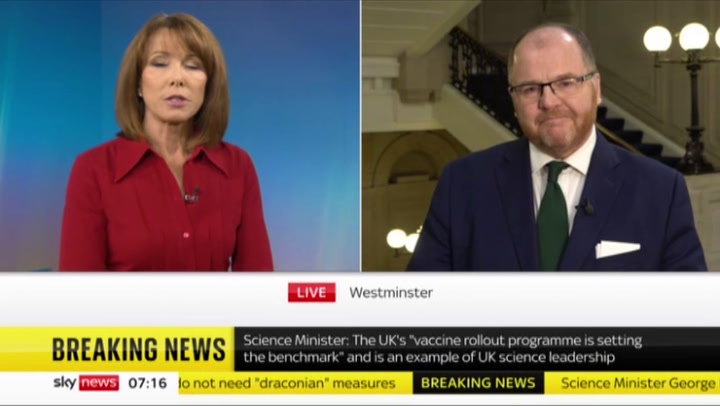 A top Tory has slammed Emmanuel Macron’s “unhelpful pantomime” jibe at Boris Johnson – as he insisted: “Of course the Prime Minister isn’t a clown”.

Minister George Freeman weighed in after the French President privately hit out at the straw-haired Prime Minster and his “Johnson circus”.

According to the magazine Le Canard Enchaine, Mr Macron claimed his counterpart had “the attitude of a vulgarian”.

He said: “BoJo talks to me at full speed, everything is going fine, we have discussions like big people, and then he gives us a hard time before or afterwards in an inelegant way.

Mr Macron is reported to have added: “It is sad to see a major country with which we could do huge numbers of things, led by a clown.”

He insisted: “I’m confident Anglo-French relations are better than that quote suggests.”

Downing Street has not commented on the comments, which have not been officially confirmed by the Elysee Palace.

But last night a UK government source suggested things will only improve after the French Presidential election in April – which could oust Mr Macron.

The source said: “The Prime Minister continues to be a staunch advocate for the strength of the UK-French relationship.

“Our approach will not change, even if we have to wait until the other side of the French Presidential election for a change of tone.”

Relations between London and Paris have been in the deep freeze for months over post-Brexit fishing rights and Channel crossings.

The situation worsened after Mr Johnson published on Twitter a letter he had written to the French leader, demanding action to crackdown on illegal Channel crossings.

On Wednesday night a Cabinet minister said she was “surprised” and “disappointed” at reports of the French President’s words.

The UK has branded the comments ‘unhelpful’
(

“I’m conscious that we have a shared mission in trying to make sure that the people smuggling gangs are really brought to justice.”

When it was put to her that the development was “troubling”, Ms Coffey added: “As I say, I’m surprised to hear that and disappointed, openly. I’m sure that we can continue to try and work together to tackle this.

“But the Prime Minister wrote to the President last week and… I hope that we’ll get a formal response back.

“People smugglers, they don’t care if people live or die. They just want their money. And we’ve got to try and work this through, not only between our two shores, but actually tackling this in the first place. And I’ve got confidence that Priti [Patel] is trying to make those inroads right across not just Europe, but also in our more international communications as well.”

‘They were like bandits’ – how did the rich get richer?