A TOP Tory has unleashed a blistering attack on Boris Johnson’s failure to hit back at Communist China’s attacks on British MPs.

Tom Tugendhat – one of five politicians slapped with sanctions by Beijing for speaking out about genocide – slammed ministers for not taking the threat “seriously enough”.

In a blistering attack, he said Parliament’s online security is weaker than Gmail, and begged Downing Street to finally wake up to the threat posed by the Red Dragon.

Mr Tugendhat, who was targeted with sanctions, claimed to have been the victim of Chinese “psyops” – psychological operations – including spoof emails to fellow MPs.

He said Parliament and the UK Government needed to do more to defend democracy and freedom of speech, adding: “I was told by friends at GCHQ – not formally, I admit – that I was better off sticking to Gmail rather than using the parliamentary system because it was more secure.

“Frankly, that tells you the level of security and the priority we are giving to democracy in the United Kingdom.”

On the penalties Beijing imposed he added: “The sanctions that the UK Government has applied on China are being applied for violations of human rights – actions, in other words.

“The sanctions China has applied are for speaking.

“They are for calling out the violation of Chinese citizens, or the brutality towards the Chinese Uighur population.”

During the urgent question, Conservative former minister Tim Loughton called the sanctions placed on him and other parliamentarians by China “laughable”.

After criticising China’s human rights record, Mr Loughton added: “To be sanctioned by a totalitarian regime is not only deeply ironic and laughable, but it is an abuse of parliamentary privilege of this House by a foreign regime.”

Mr Adams added the Government will not allow the sanctions to “distract attention from the gross human rights violations” taking place.

He told the Commons: “Just as this Government will be unbowed by China’s actions, I have no doubt that members across this House will be undeterred in raising their fully justified concerns about the situation in Xinjiang and the human rights situation in China more broadly.

“I applaud the parliamentarians named by China.”

He asked: “Will the Government now commit to an audit of every aspect of the UK-China relationship, so that we can finally call time on the Conservatives’ failed golden era strategy and replace weakness, division and inconsistency with an approach that is instead based on strength, unity and consistency?”

Tory MY Tugendhat interrupted during live interview by young son 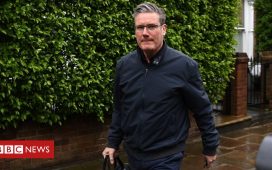 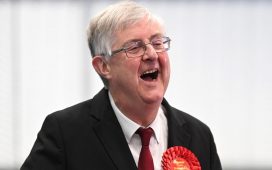