In the early weeks of the pandemic, Donald Trump reportedly suggested Americans abroad infected with Covid-19 should be quarantined at Guantánamo Bay, according to a new book about the pandemic by Washington Post journalists Yasmeen Abutaleb and Damian Paletta.

The book, Nightmare Scenario: Inside the Trump Administration’s Response to the Pandemic That Changed History, is based on interviews with more than 180 people.

“The book offers new insights about Trump as the president careened between embracing miracle coronavirus cures in his quest for good news, grappling with his own illness — which was far more serious than officials acknowledged — and fretting about the outbreak’s implications for his reelection bid,” according to the Washington Post’s report on the book.

Trump also reportedly was in a frenzy about testing, an essential responses to an infectious disease, and argued that the federal government shouldn’t be tracking infections, according to the Post.

When former vice president Mike Pence was installed as the head of the coronavirus task force in February 2020, his chief of staff Marc Short “pushed back against an HHS effort to send free masks to every American household in the response’s early days, a step that some public health experts think would have depoliticized mask-wearing but which Short believed would unnecessarily alarm people,” according to the report.

The secretary of veterans affairs, Denis McDonough, announced over the weekend that the government will offer gender confirmation surgery to transgender veterans.

Speaking at a Pride event in Orlando on Saturday, McDonough said it is “the right thing to do” and was part of a broader effort to overcome the “dark history” of discrimination against LGBTQ+ service members.

The National Center for Transgender Equality estimates more than 134,000 veterans are transgender and more than 15,000 trans people are currently serving in the US military.

This change won’t happen immediately and McDonough said they will use the time to expand Veterans Affairs health benefits to “develop capacity to meet the surgical needs” of transgender veterans.

“We’re making these changes not only because they are the right thing to do, but because they can save lives,” he said.

In the landmark Scotus decision against the NCAA today, Justice Brett Kavanaugh wrote a staunch defense for student athletes.

In a concurring opinion, Kavanaugh highlighted some of the most hallowed events in US sports, including the NCAA baseball world series and said “but those traditions alone cannot justify the NCAA’s decision to build a massive money-raising enterprise on the backs of student athletes who are not fairly compensated.”

The case was brought by former student athletes who argued the education-related compensation – such as: computers, tutoring and study abroad scholarships – they received while participating in sports at school was unfair. The case doesn’t decide whether athletes can be paid salaries – an issue that will continue to be debated.

Supreme Court votes 9-0 against the NCAA

The case challenged the NCAA’s limits on compensation for student athletes, arguing that the governing body violated federal laws barring price fixing in markets. During oral arguments in March, the justices expressed skepticism about the NCAA’s argument that broadening benefits would defeat the purpose of “amateurism” in college sports.

In reviewing the case, the justices determined in the majority opinion that the NCAA “is capable of depressing wages below competitive levels for student-athletes and thereby restricting the quantity of student-athlete labor.”

Some NCAA rules limiting compensation will remain in place, but Justice Brett Kavanaugh wrote that limits on other forms of compensation should be scrutinized too.

In response to the court’s decision, Connecticut senator, Chris Murphy, said: “The NCAA collusion machine, designed to keep college athletes impoverished so the billions in profits can be kept for a small cabal of insiders, is finally starting to crumble to pieces.”

More and more revelations are emerging about just how far Trump’s justice department went rogue and new inquiries are being set up to examine the wrongdoing, writes Peter Stone for the Guardian:

More political abuses have emerged, with revelations that – starting under attorney general Jeff Sessions in 2018 – subpoenas were issued in a classified leak inquiry to obtain communications records of top Democrats on the House intelligence committee. Targets were Adam Schiff and Eric Swalwell, who were investigating Kremlin election meddling, and also several committee staffers and journalists.

Democrats in Congress, as well as Garland, have forcefully denounced these Trumpian tactics. Garland has asked the department’s inspector general to launch his own inquiry, and examine the subpoenas involving members of Congress and the media. Congressional committees are eyeing their own investigations into the department’s extraordinary behavior.

“There was one thing after another where DoJ acted inappropriately and violated the fundamental principle that law enforcement must be even-handed. The DoJ must always make clear that no person is above the law,” said Donald Ayer, deputy attorney general in the George HW Bush administration.

Joe Biden is set to meet with financial regulators on Monday afternoon in the Oval Office, to discuss issues including the financial risk of climate change. Kamala Harris will also prioritize economic issues today, in a roundtable with a local union and on a trip to Pittsburgh to highlight the expanded child tax credit.

Biden is also working this week to sway senators to back his infrastructure proposal.

There will also be some rustling this week around voting rights, as the Senate prepares for a procedural vote on Tuesday about the For The People Act. 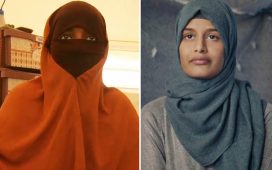 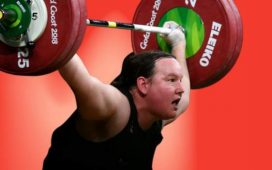 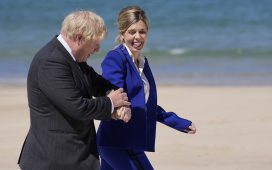 Lily Allen: from chart-topping handbag kid to the heart of London’s West End