Tommy Fury has plenty of career paths to choose from – from reality star, to influencer, to boxer.

But the 20-year-old is already adding another string to his bow.

The Love Island star has launched his first edit with boohooMAN after being announced as one of the brand’s ambassadors.

Speaking to Metro.co.uk, Tommy said: ‘I was always a massive boohooMAN supporter, even before I went in the villa – it’s a clothing brand I always did wear. It’s a massive privilege to be working with boohooMAN, it’s a pleasure to be on board.

‘You should always feel comfortable and feel happy in what you wear. Fashion is a big thing – we’ve always got to be staying fresh now, haven’t we?’

The shindig came a night after Molly Mae launched her own collection with PrettyLittleThing – so you would understand if there was some friendly rivalry between the couple.

‘We’re just enjoying every day as it comes.’

Tommy and Molly Mae came second to Amber Gill and Greg O’Shea in the Love Island final at the end of July, and since then, they have seen their lives change and their Instagram followings rocket.

As well as landing new campaigns and being inundated with party invitations, Tommy is living his fresh relationship in the limelight, which can often be a major struggle for islanders.

However, this lad is cool as a cucumber about his newfound fame.

He said: ‘Your life changes in different ways – it can be a little bit in some ways, or things can change dramatically. I’ve never been a materialistic man and as far as I’m concerned, as long as I’ve got my friends and family around me, that’s all that matters.

‘But I’m so grateful for the support that everyone’s been giving, and I’m so thankful for everyone that’s following me.’

Addressing the constant spotlight on him, he continued: ‘I don’t mind. I’m not really bothered about it, because I’ve never been anything but myself. I was myself for eight weeks, constantly, recorded for 24 hours a day – people would have seen the real me, and nothing changes on the outside. Whatever I do I do, and I wouldn’t change myself for anybody.’

And that means keeping up with his former day job.

Tommy’s boxing promoter Frank Warren previously revealed the star would be taking a year out from his career, but Fury confirms that it won’t be long until we see him fighting again.

He said: ‘I’m still doing my training, still got to keep in shape. Hopefully early next year I’ll be back in that ring.’

Tommy Fury’s boohooMAN edit is available on boohooman.com, with prices ranging from £12 to £65. 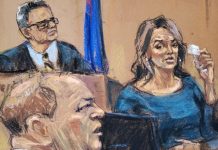 Eminem lyrics: Rapper says album was 'not made for the squeamish'