The Tokyo Olympics has been postponed for a year after Japan called for a delay due to the coronavirus crisis.

The name of the delayed Olympics will still be Tokyo 2020, Tokyo Governor Yuriko Koike said today, adding that the Games would be held by summer 2021.

Koike made the comment to reporters after she and Prime Minister Shinzo Abe spoke to the head of the International Olympic Committee, Thomas Bach.

The Games must be rescheduled to a date beyond 2020 but not later than summer 2021, the International Olympic Committee said in a statement.

Prime Minister Abe said after his telephone talks with Bach that he requested a postponement of about one year ‘taking into consideration the current circumstances’ and to secure an environment in which athletes can perform in their best conditions and the sense of safety and security for the audience. 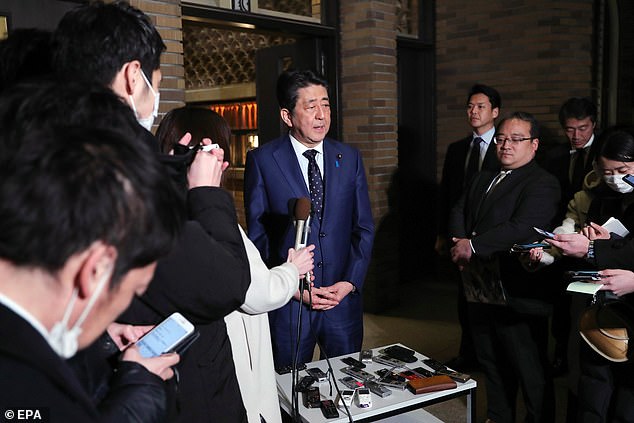 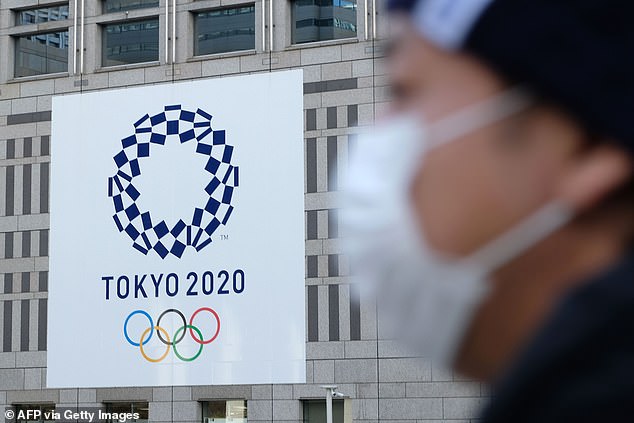 Pictured: A man wearing a mask passes the logo of the Tokyo 2020 Olympic Games displayed on the Tokyo Metropolitan Government building. The Games must be rescheduled to a date beyond 2020 but not later than summer 2021, the International Olympic Committee said in a statement

The IOC President Thomas Bach has agreed ‘100%’ to the postponement proposal.

Abe had previously said a postponement was unavoidable if the 2020 Games couldn’t be held in a complete manner amid the virus pandemic.

The IOC and Japanese government had announced they would undertake a month-long consultation before making a final decision but there was a rethink as more and more voices joined the chorus of calls for a postponement.

On Monday, former IOC board member Dick Pound said the Swiss-based body appeared to have decided to delay the event, likely for a year, due to the virus.

The Tokyo Olympic torch relay – which was meant to start on Thursday as planned in northeastern Fukushima prefecture – will now also be cancelled.

There was meant to be an Olympic flame – that arrived on March 12 from Greece – carried in a lantern and transported by a vehicle along what organizers hoped would be empty roadsides. 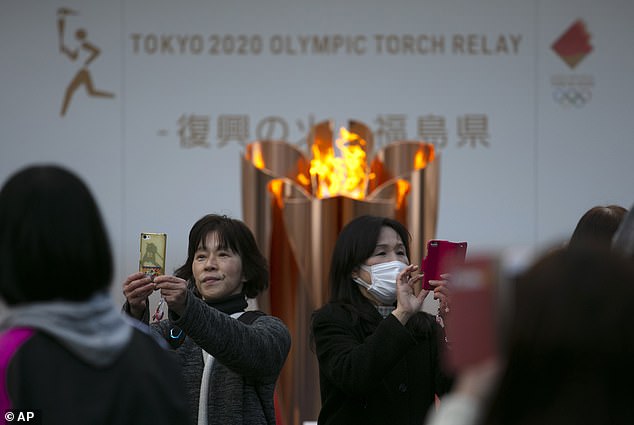 The Olympic flame burns during a ceremony in Fukushima City, Japan today. The torch relay will start on Thursday as planned 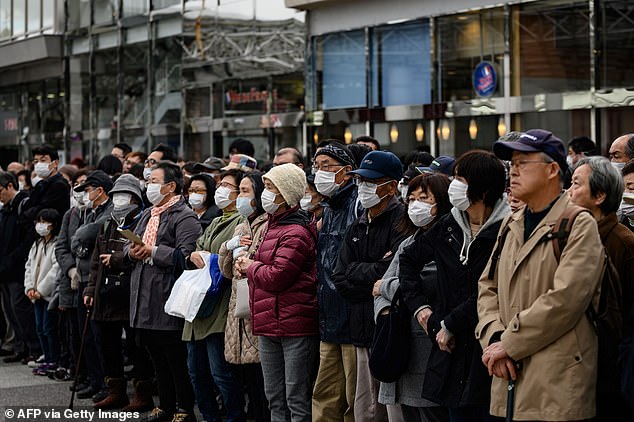 The coronavirus outbreak has now infected more than 377,000 across 194 according to a Reuters tally on Tuesday morning, with over 16,500 deaths linked to the virus.

Efforts to contain it have led to major travel, commercial and social restrictions, which have also hindered the ability of many athletes to prepare for the Games.

Canada and Australia had already said they wouldn’t be sending teams to Tokyo if the Games went as scheduled this year, while Britain said it was likely to follow suit after meeting with sporting body representatives on Tuesday.

The United States Olympic and Paralympic Committee said it had listened to feedback from athletes and was encouraged by a clearer path towards postponement.

‘Even if the current significant health concerns could be alleviated by late summer, the enormous disruptions to the training environment, doping controls and qualification process can’t be overcome in a satisfactory manner,’ the USOPC said in a statement on Monday. 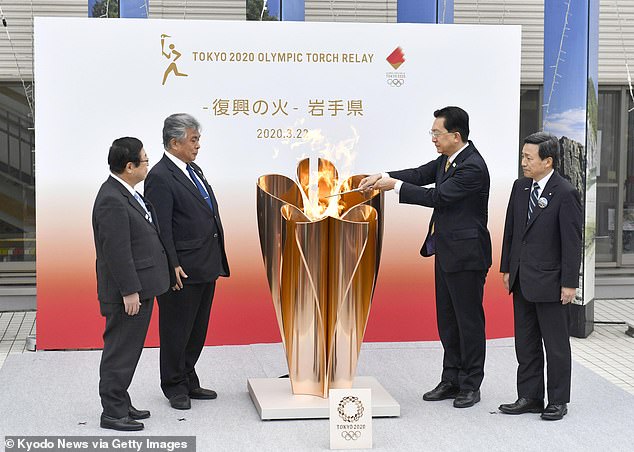 Pictured: A ceremony is held at Miyako Station of Sanriku Railway in Iwate Prefecture on March 22, 2020, marking the departure of the flame for this year’s Tokyo Olympics on a tour of northeastern Japan

The United States is by far the most successful nation in the history of the Games, while the rights deal with American broadcaster NBC to televise the Olympics represents from 50% to 70% of the IOC’s total annual revenues.

Tony Estanguet, head of the Paris 2024 Olympics organising committee and an IOC member, had also said a delay of the 2020 Olympics was likely.

‘Today the Games are not the priority, the priority is health, and that is how the world of sports contributes to that international solidarity,’ Estanguet said on France Info radio.

Japan and the IOC had previously said calling off the Games entirely is not an option but a delay would present major logistical difficulties given the crowded global sporting calendar and other commercial considerations. 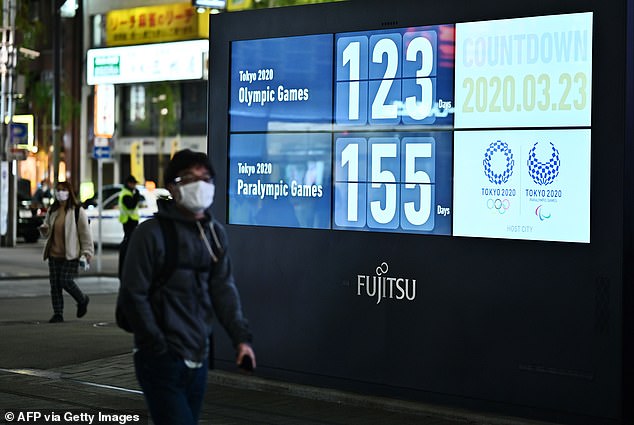 Pictured: A man wearing a face mask, amid concerns of the COVID-19 coronavirus, walks past a display showing a countdown to the start of the Tokyo 2020 Olympic Games in Tokyo 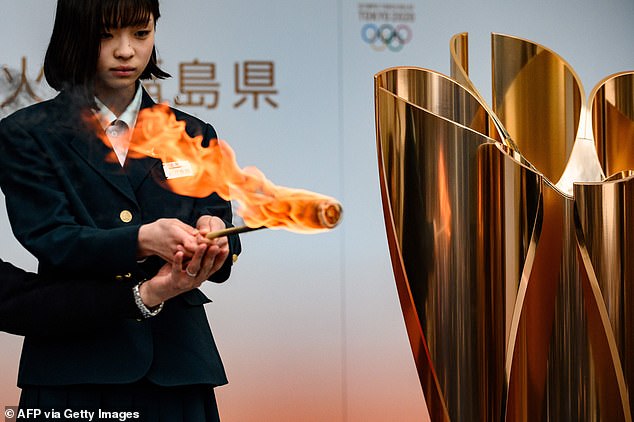 World Athletics said on Monday they would be willing to move their 2021 world championships, scheduled for Aug. 6-15 in Eugene, Oregon to clear a path for a 2021 Olympics.

A groundswell of concern from athletes – already struggling to train as gyms, stadiums and swimming pools close around the world – appeared to be tipping the balance towards that outcome.

‘I have ridden not just a rollercoaster but the entire theme park of emotions,’ Keesja Gofers, part of the Australian women’s water polo team, said on Instagram.

‘I am relieved. Athletes around the world will now have the chance at a proper preparation and the Olympics can, on whatever date they are held, continue to be a coming together of the world’s best at their best.’

As of Tuesday, Japan had 1,128 confirmed cases of the 42 deaths attributed to the coronavirus. The situation in Japan seems almost normal with ordinary daily activity continuing, a stark contrast to Europe and the United States.

An Olympics postponement would be a blow for host country Japan, which has pumped in more than $12 billion of investment, and huge sums are also at stake for sponsors and broadcasters.

A poll showed about 70% of the Japanese think it is appropriate to delay the Olympics, the Sankei said.

The Olympics have never before been delayed, though they were cancelled altogether in 1916, 1940 and 1944 during the two world wars. Major Cold War boycotts also disrupted the Moscow and Los Angeles Games in 1980 and 1984.