NEWSCABAL
NEWSCABAL > europe > ‘Together because it feels good’: French man who goes everywhere with a pigeon
europe


When 80-year-old Xavier Bouget goes for a ride on his bicycle, a majestic white pigeon rides on his hat. When he tinkers in his workshop, she pecks at the drill bits and nails. And when he waters his garden, she observes from his shoulder.

Bouget, a retiree from the north-west French region of Brittany, befriended the bird, who he named Blanchon, when it was a chick and now it tags along with him everywhere, sitting on his shoulder or walking along beside him.

“There’s a desire to be together, because it feels good,” said Bouget, who before retirement worked in the building supplies trade.

The pair first met when Bouget was out near his home and saw a tiny, “almost featherless” pigeon fall to the ground as it tried to escape from a cat. He returned home thinking, “another living being that is going to have a bad day”.

But when he mentioned what he saw to his wife, she asked him why he didn’t pick up the bird. So he went back.

“I came home with Blanchon in my pocket,” he said.

He is often asked by people how he managed to train the bird to be so tame, he said, but he replies that there is no trick, just mutual respect.

Any human can build a relationship with an animal, he said, “once they respect the animal for what it is, that is a living creature that shares the Earth with us.”

“You just need to be patient, to understand how they live and adapt to their life, because they will adapt to yours.” 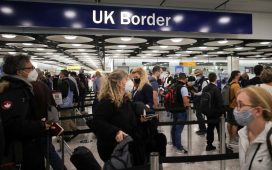