Primero Transport Services Ltd., the operators of Bus Rapid Transit in Lagos, says commercial motorcyclists on BRT lane were responsible for the collision of its two buses on Monday.
Fola Tinubu, the Managing Director of the firm, made the allegation in an interview with the News Agency of Nigeria following the collision of two BRT buses at Asolo area of Ikorodu which left some persons injured.
According to the Lagos State Traffic Management Authority which shared photos from the accident scene on its official Twitter handle, the collision happened around 7: 45 a.m.
LASTMA said that the accident led to build-up of traffic around the area, adding that efforts were being made to remove the vehicles from the road at the time of the tweet.
Reacting to the accident, Tinubu said that the state government must do something fast about the menace of commercial motorcyclists, popularly known as Okada riders, riding on BRT lanes.
He said that the accident was caused by commercial motorcyclists weaving in-between buses.
He said: “We need to do something about these Okada menace because if we don’t do something about it, this kind of thing will still happen again.
“The buses trying to evade an Okada and that was when they collided with each other.”
Tinubu expressed gratitude to God that no life was lost in the incident.
He said: “There were some minor injuries and all the affected have been released from the hospital and everyone of them spoke out. We thank God for that.
“However, my big concern is this Okada menace. The way they ride is as if they have more than one life. Their weirding between buses needs to be addressed.
“The government just has to do something urgently about Okada on BRT lanes.”
NAN recalls that a fatal accident between a BRT bus and a Dangote truck claimed three lives and left many injured in Ikorodu on August 27.
Two staff of the BRT bus and a passenger were killed when the Dangote truck allegedly rammed into a BRT bus at Majidun area of Ikorodu, Lagos.
The cement-laden truck allegedly had a brake failure and skidded into the BRT lane, crushing an oncoming BRT bus with registration number LSR228XS. 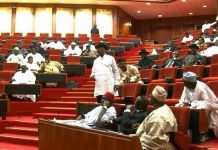