If you’re on a dating app, it’s likely you’ve had the embarrassing experience of coming across a former flame, cousin or colleague while browsing for a date.

But the days of awkward run-ins are finally a thing of the past, thanks to Tinder’s latest feature.

The app has launched a new Block Contacts tool that allows users to block personal contacts in the app.

Bernadette Morgan, Group Product Manager, Trust & Safety at Tinder, said: ‘We may not be able to save you from awkward run-ins at the coffee shop, but we are giving you more control over your experience on Tinder.’ 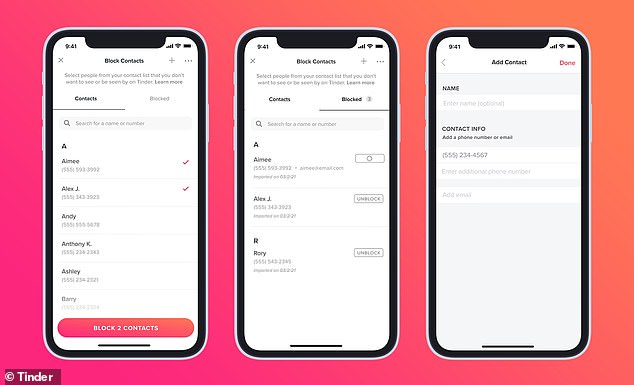 The Block Contacts feature gives members more control over their experience, allowing them to black specific personal contacts that they’d rather not come across

How to Block Your Ex

The tool can be found within the Profile Settings section of the app.

There, users can input which of their contacts they’d rather not see, or not be seen by on Tinder.

Whether or not those contacts are already on Tinder, they then won’t appear as a potential match.

Tinder launched the tool following a recent survey, which found that more than 40 per cent of Tinder users have come across an ex partner on the app.

While some users don’t seem to mind finding former flames, given the chance, 78 per cent of those surveyed said they’d prefer not to see, or be seen by these connections on the app.

The Block Contacts feature gives members more control over their experience, allowing them to block specific personal contacts that they’d rather not come across.

‘We’re rolling out Block Contacts as an additional resource empowering members with peace of mind by helping create a worry-free space for them to spark new connections,’ Ms Morgan added.

The tool can be found within the Profile Settings section of the app.

There, users can input which of their contacts they’d rather not see, or not be seen by on Tinder. 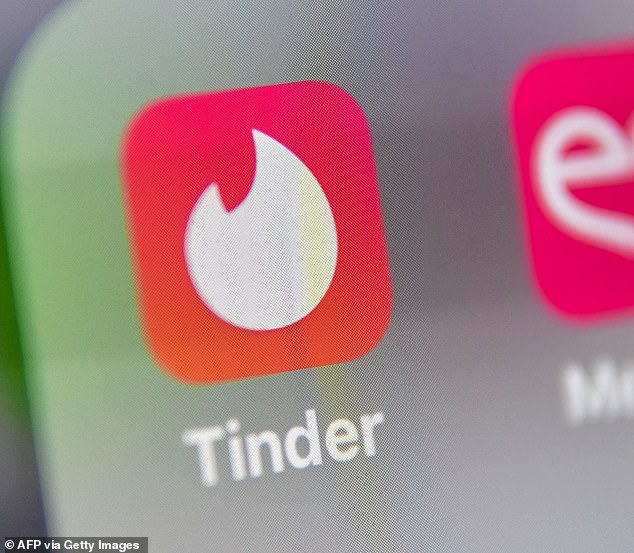 The tool is rolling out to all Tinder users today, but was originally tested in India, Korea and Japan, where it proved popular

Whether or not those contacts are already on Tinder, they then won’t appear as a potential match.

The tool is rolling out to all Tinder users this week, but was originally tested in India, Korea and Japan, where it proved popular.

According to Tinder, members who adopted the Block Contacts feature added around a dozen contacts to their block list on average.

The news come shortly after Tinder announced that it will enable users to see if potential matches have had the Covid-19 jab.

Dating apps including Tinder and Hinge, as well as websites such as Match and Plenty of Fish, will add features allowing users to show others whether they have had the jab.

In-app bonuses will be given to those who say they are jabbed – though the process will be voluntary with no official verification.

HOW DID ONLINE DATING BECOME SO POPULAR?

The first ever incarnation of a dating app can be traced back to 1995 when Match.com was first launched.

The website allowed single people to upload a profile, a picture and chat to people online.

The app was intended to allow people looking for long-term relationships to meet.

eHarmony was developed in 2000 and two years later Ashley Madison, a site dedicated to infidelity and cheating, was first launched.

In 2012, Tinder was launched and was the first ‘swipe’ based dating platform.

After its initial launch it’s usage snowballed and by March 2014 there were one billion matches a day, worldwide.

In 2014, co-founder of Tinder, Whitney Wolfe Herd launched Bumble, a dating app that empowered women by only allowing females to send the first message.

The popularity of mobile dating apps such as Tinder, Badoo and more recently Bumble is attributable to a growing amount of younger users with a busy schedule.

In the 1990s, there was a stigma attached to online dating as it was considered a last-ditch and desperate attempt to find love.

This belief has dissipated and now around one third of marriages are between couples who met online.

A survey from 2014 found that 84 per cent of dating app users were using online dating services to look for a romantic relationship.

Twenty-four per cent stated that that they used online dating apps explicitly for sexual encounters.