The Bureau of Meteorology has issued severe thunderstorm warnings, including hail and damaging winds, for parts of Victoria and New South Wales from Saturday evening through to Monday.

Sydney and surrounding areas, including the Blue Mountains, were likely to experience heavy rain and strong winds late on Saturday, the bureau warned.

The bureau said severe thunderstorms were also likely to produce strong and gusty winds of up to 100 km/hr and large hailstones on Saturday evening in the far east of the Victoria, including locations such as Mallacoota, Cann River, Chandlers Creek, Combienbar and Bonang.

A SEVERE THUNDERSTORM WARNING for DAMAGING WINDS and LARGE HAILSTONES is current for parts of the East Gippsland Forecast District. Locations which may be affected include Mallacoota, Cann River, Chandlers Creek, Combienbar and Bonang. Stay informed: https://t.co/PPjxmUKfMl pic.twitter.com/RkR1I62umd

Similar conditions were likely to affect areas across the border on the south coast of NSW, with warnings also in place for the NSW central tablelands, north-west slopes and plains, central west slopes and the Snowy Mountains.

“These are the kind of winds that could blow away outdoor furniture or cause weaker tree limbs to come down,” he said.

“But it’s looking like a transient event confined to Sunday. By late Sunday it will be off to the east and things will settle down quite nicely.”

Stuart said a sharp drop in temperature would follow with the arrival of a cool southwesterly change bringing the risk of storms, although little rain was expected on Sunday.

Looking ahead, Stuart said the week would start off quietly before showers and thunderstorm activity ramped up from Thursday into the weekend.

Parts of NSW were also warned to expect unsettled conditions and possible thunderstorms on Sunday and Monday, particularly about the ranges, as a cold front pushed through from the south. 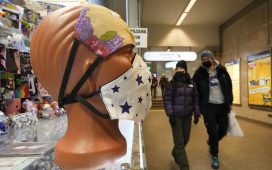 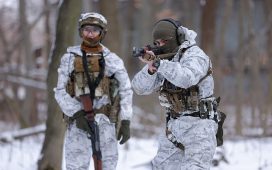