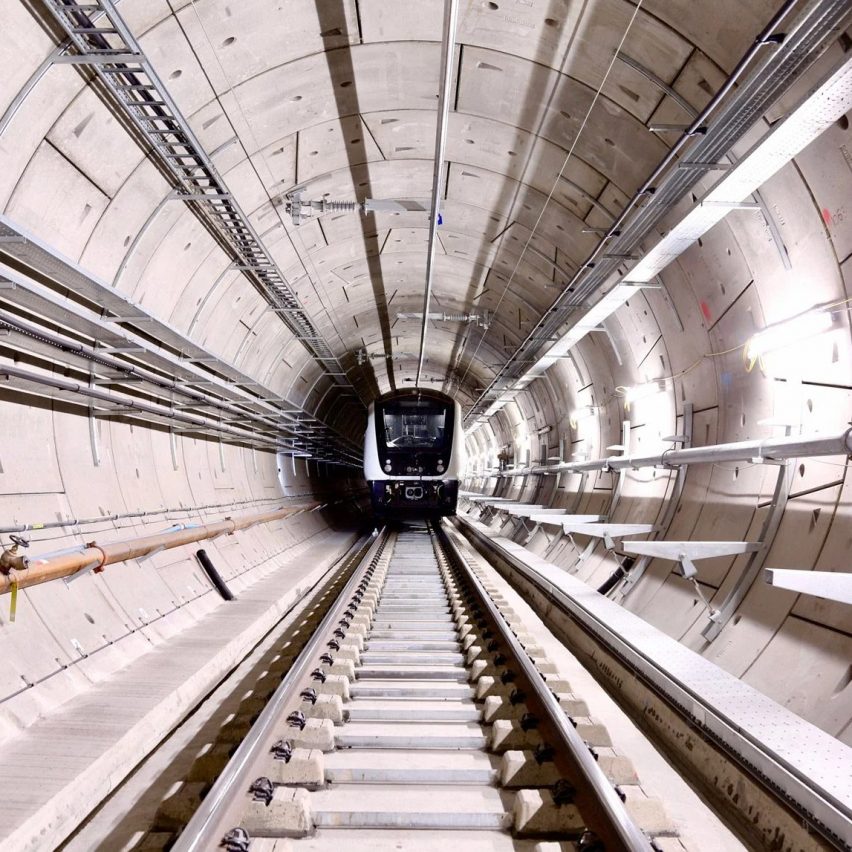 This week on Dezeen, we rounded up 10 new central stations along the Elizabeth Line, the highly anticipated subterranean railway that opens in London next week.

With the Elizabeth Line set to open on 24 May, our guide to its architecture focuses on the central section of the line that includes stations designed by architecture studios WilkinsonEyre and Hawkins\Brown.

Also known as Crossrail, the long-awaited project is the biggest expansion of London’s underground railway network in more than a century.

Designed by architecture studios BIG and Heatherwick Studio, the Bay View campus has sweeping, scale-like panels across its roof. As well as containing two office buildings for Google employees, the campus has an events centre and 240 short-term employee accommodation units.

We continued our series on deconstructivism with a profile piece on Canadian architect Frank Gehry. The profile traces Gehry’s oeuvre from his beginnings as a student in Los Angeles, to winning the Pritzker Architecture Prize in 1989 and creating cultural projects across the globe.

Following his profile, we revisited Gehry’s Guggenheim Museum Bilbao, a building that reignited the city’s economy and brought global attention to deconstructivism.

In an opinion piece, architect and urbanist Vishaan Chakrabarti argued that “Goldilocks” buildings – a term he coined to describe high-density, low-rise urban housing models – are the key to accommodating another three billion people on the planet.

Chakrabarti said that over the next 80 years, as populations grow and continue to put a strain on the environment, it could solve our global housing and climate problems.

In California, Louis Vuitton debuted its 2023 cruise collection at the Salk Institute, a brutalist building by US architect Louis Kahn that overlooks the Pacific Ocean.

The French fashion house showcased a range of shimmering garments that look like body armour against a backdrop of the setting sun.

Popular projects this week included a home on stilts in Maine, a Portuguese farmhouse and a multi-generational home in England.

Our lookbooks this week focused on bedrooms with mezzanine levels and green living rooms that prove the colour’s versatility.

This week on Dezeen

This week on Dezeen is our regular roundup of the week’s top news stories. Subscribe to our newsletters to be sure you don’t miss anything.

The post This week we revealed the architecture of the Elizabeth Line appeared first on Dezeen.

Cracking the code to sending a letter | Letters

MYOP in Arles 2022: Work in Progress – in pictures

‘Eventually it will just be a barcode, won’t it?’ Why Britain’s new stamps are causing outrage and upset

‘Gods that walk among us’: the photographer bringing glamour to portraits of community leaders

Dying of Covid, my 93-year-old artist father was given hours to live. Surely he couldn’t paint himself out of this one? | Nigel Featherstone

In the Black Fantastic review – spectacular from first to last