Former Arsenal icon Thierry Henry has stated his belief that Liverpool could form a new three-man partnership that will make them unstoppable. The Reds claimed a dominant 4-1 win at Everton in the Merseyside Derby, extending their unbeaten run at Goodison Park to 11 years.

It was a win that ensured they maintained the pressure on top two Chelsea and Manchester City in what has become a three-way race for the Premier League title.

And this campaign has been a stark contrast to last season when a number of injuries to key players battered Jurgen Klopp’s squad.

Those injury problems forced Klopp to parachute midfielders into his defence, leading the Reds to be drawn into a battle to qualify for the Champions League.

But with his squad now mostly fully fit, Liverpool have got back on form, scoring 43 goals in 14 games in a charge for the title.

Five of those goals came at Goodison Park on Wednesday, with Mohamed Salah scoring a double, as well as Jordan Henderson and Diogo Jota notching one apiece.

JUST IN: Liverpool’s transfer dilemma clearer than ever after Everton thrashing

The performances of the three experienced midfielders has not gone unnoticed by Henry, who won the Premier League twice with Arsenal.

And the Frenchman believes that the trio could form a partnership that will make the Reds unstoppable.

“The scary thing about that Liverpool side is that Fabinho, Thiago and Henderson have played just three times together,” Henry told Prime TV.

“If they start to really click and understand each other I don’t know how you’re going to stop them.”

Henry also hailed the Reds as a whole for their display against Everton, which saw them inflict the Toffees’ biggest home derby defeat for 39 years.

“They are on a different planet, not only them but the two others at the top – the rhythm they are giving to the league is amazing.

“Liverpool is on another planet. The intensity on and off the ball, still applying pressure at the end of the game, still trying to play with the same intensity – amazing.”

Klopp’s men are now just two points off Chelsea at the top of the Premier League and travel to Wolves in their next outing on Saturday. 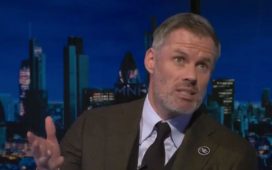