Theresa May under pressure to pull new Brexit deal vote


Theresa May is under increasing pressure to pull the parliamentary vote on her revamped Brexit deal just a day after it was announced, with a growing number of MPs from her Conservative party calling on her to resign.

On Tuesday, the prime minister announced she would bring her Brexit package back to the House of Commons for a fourth — and final — vote in the first week of June. But the overwhelmingly negative response to her speech has dashed Downing Street’s hopes of success.

Michael Gove, the environment secretary and prominent Brexiter, said there would be “reflection on best way forward” by the government and hinted that the vote might not go ahead as planned.

“We will reflect over the course over the next few days on how people look at the proposition put forward,” he told the BBC on Wednesday. “But there has to be a vote on the withdrawal agreement implementation bill [at some stage].”

The pound was trading below $1.27 on Wednesday morning, its lowest level since January, reflecting the continued political uncertainty.

Mr Gove acknowledged “there’s been a lot of sturm und drang, summer lightning” over the prime minister’s new proposals but urged his Conservative colleagues to “read the bill and reflect on the options in it”.

Prominent Conservatives have called on Mrs May to step down immediately. Former Brexit minister David Jones told The Daily Telegraph: “She is desperate, she is deluded and she is doomed”. Richmond MP Zac Goldsmith also called for her to resign.

Jacob Rees-Mogg, head of the Brexit-supporting European Research Group of MPs, said that Mrs May’s strategy had failed and she should resign instead of bringing the bill forward.

“She decided to tack to the left whilst losing people in her own party,” he said. “Under constitutional conventions, a prime minister should recognise that she does not have a majority in the house and take the more dignified approach by tendering her resignation to the Queen.”

The 1922 Committee of Conservative MPs will meet later today, where several members of its executive will push for rule changes to allow an immediate challenge to Mrs May’s position. “I would be amazed if rule change is not discussed,” said one member.

The full text of the withdrawal agreement implementation bill — the legislation to put Mrs May’s deal into law — will be published later today. It is expected to include details that will provoke further opposition among Tory MPs.

Keir Starmer, Labour’s Brexit spokesman, said that Mrs May “still has time” to “pull the vote”. “The package that the prime minister outlined yesterday is just far too weak and it looks obvious that its heading for a loss, a pretty heavy loss.

“I think in reality the prime minister ought to now admit defeat and I think she should do well to just pull the vote and pause, because this is going nowhere,” he said.

Sir Keir called on the prime minister to include a pledge for a second Brexit referendum if she wanted to receive support from the Labour party. At present, Mrs May’s proposals only include debating time on another plebiscite.

More than 30 Tory MPs announced overnight they would not support Mrs May’s new Brexit offering, putting the government on course for another heavy defeat if the vote is held. Senior Eurosceptics claimed that the defeat would be “significantly larger” than in the third vote, when the government lost by 58.

Brexit pragmatists in the Labour party, prominent supporters of a second referendum and the Democratic Unionist party, who are propping up the minority Conservative government, have also announced they will not support the new deal. 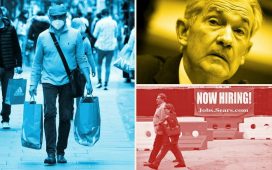 Will the US inflation rate justify a quicker taper from the Fed?