The Wildlife Trusts reveals 2020's best sights from the seas


The rare 10-foot-long bluefin tuna, orcas in Strangford Lough and bottlenose dolphins ‘partying’ off Teesside are among the Wildlife Trusts’ favourite marine sights for 2020.

The wildlife organisation has compiled a best-of list for the year, featuring the most exciting sights in UK waters, captured both by experts and members of the public.

In the annual review, Wildlife Trusts has also detailed an extremely rare sighting of a spectacular sea slug and the successful reintroduction of sand lizards to Lancashire sand dunes.

However, wildlife is still under threat from plastic, including disposable personal protective equipment (PPE) such as face masks and discarded fishing gear, the charity warns, in the era of coronavirus. 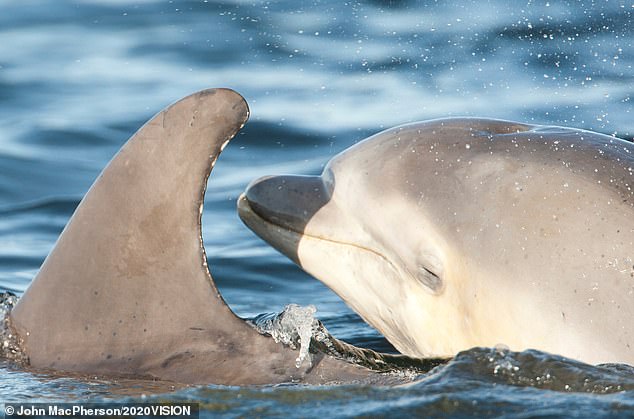 Wildlife Trusts – the federation of 46 independent wildlife conservation charities across the country – reported a surge of public interest in marine life and coastal species due to this year’s pandemic.

This has resulted in a rich variety of fascinating photos and video footage – but PPE has become a mark of the human footprint in 2020. 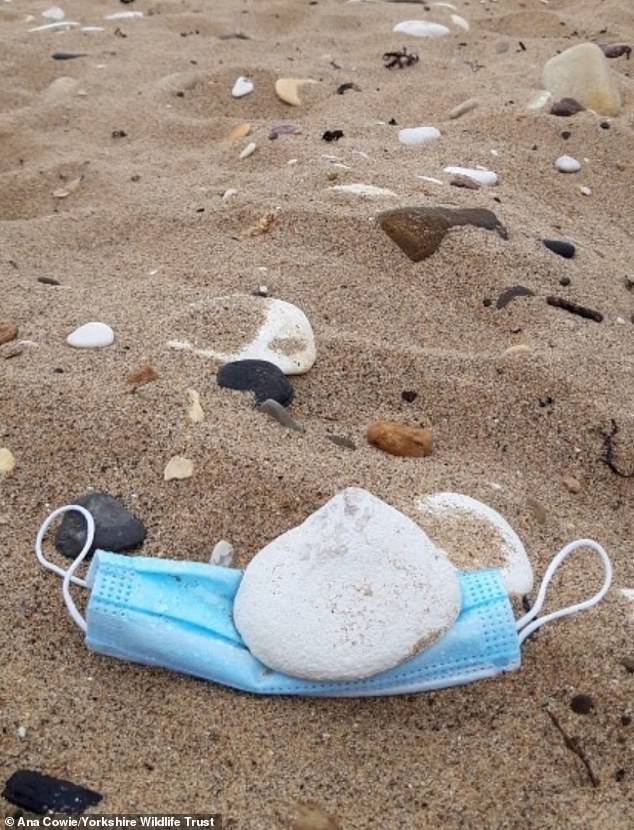 A disposable face mask on the beach in Yorkshire this year. Although they keep out pathogens effectively, single-use masks have a long afterlife after they are discarded, ending up in oceans 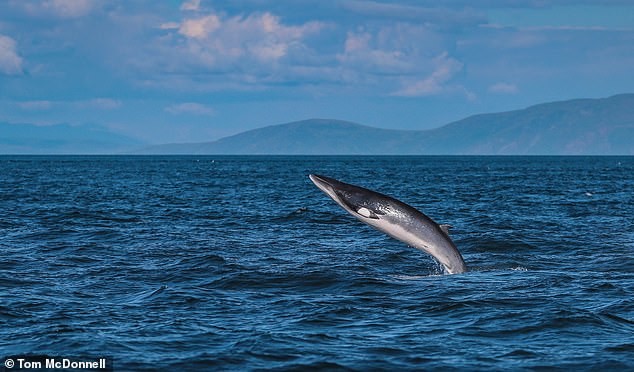 Minke whale breaching (archive). There was an increase in minke whale and porpoise surveys carried out by members of the public in Yorkshire 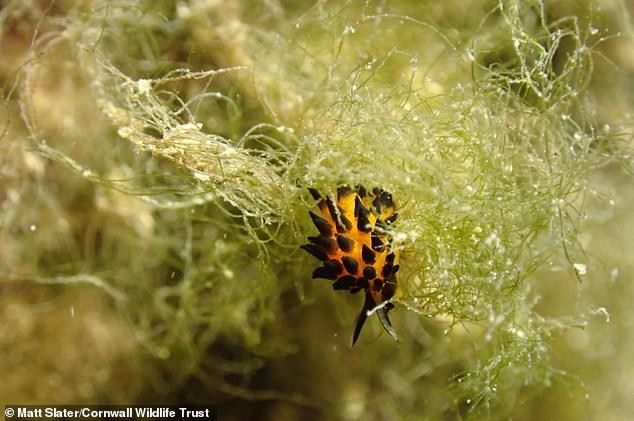 An extremely rare sighting of a stunning species of sea slug was made this November by a Cornwall Wildlife Trust Seasearch volunteer. The sea slug, placida cremoniana, is a miniscule orange and black sacoglossan (or a sap sucking) sea slug measuring just millimetres in length

‘Many members of the Cornish Plastic Pollution Coalition, a grouping of more than 50 conservation and beach cleaning groups, reported large amounts of discarded PPE appearing along roadside verges and near supermarket car parks all over Cornwall.

‘We’d like to urge everyone to take proper responsibility and to please take it home and dispose of it properly, rather than littering our streets, countryside and beaches.

‘Littered PPE not only looks unsightly. If left lying around it poses a risk as it could injure wildlife too.’

Naturalist Sir David Attenborough, President Emeritus of The Wildlife Trusts, also warned of the need to protect the UK’s seas and their wildlife from activities such as trawl fishing, cable-laying and plastic pollution. 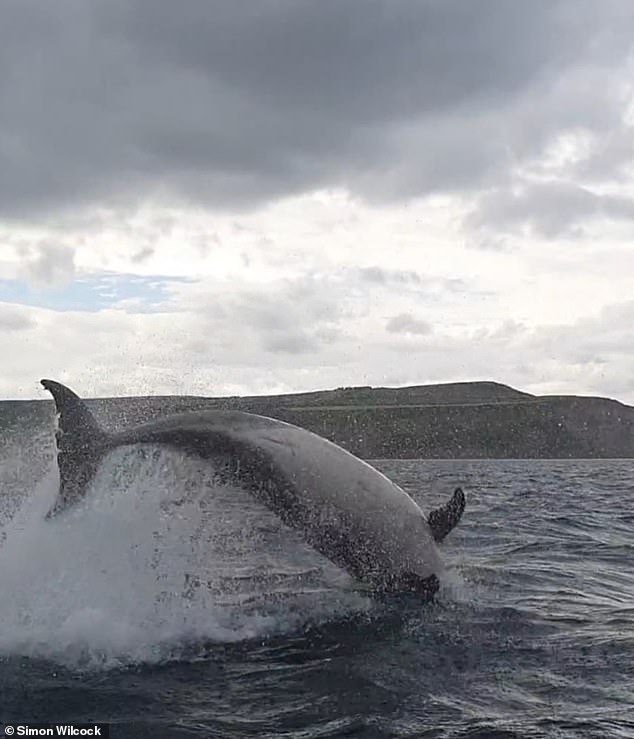 Bottlenose dolphin during an incredible display at Redcar, North Yorkshire, England this year

‘We’re fortunate that our seas are protected by a blue belt of marine protected areas but sadly this does not prevent damaging activities still occurring in these special places,’ Sir Attenborough said.

‘For too long we have taken from the sea with little regard of the consequences.

‘We are all aware of the problems presenting by plastic litter, but some pollutants and impacts are hidden from view, beneath the surface of the waves.

‘Our government needs to tackle these problems but we can all do our bit too.’

Among the highlights of 2020 was rare evidence of a baby Risso’s dolphin captured on camera by a wildlife enthusiast, clearly showing foetal folds that indicated it had just been born off the coast of Anglesey, Wales.

Infant dolphins are born with folds still visible on their skin, from where they have been curled in the mother’s womb, although these disappear over time as the dolphin stretches and grows.

The Risso’s dolphin population is small and therefore vulnerable to disturbance from human activity. 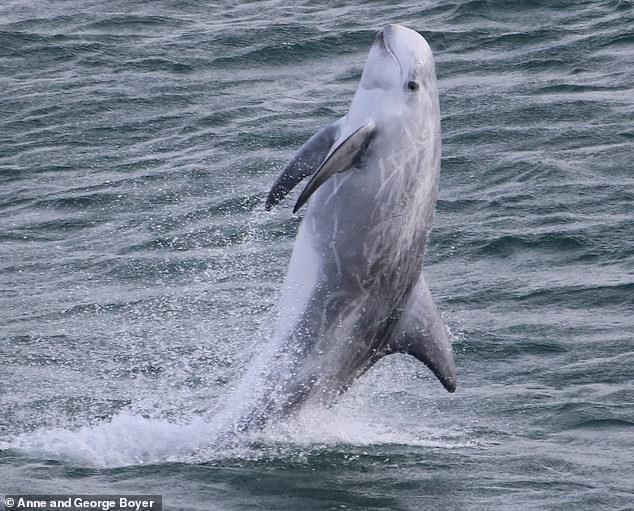 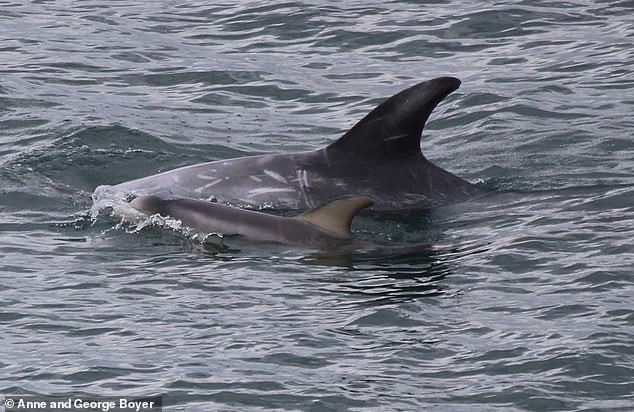 Risso’s dolphins, Wales. They are born a greyish-brown colour and as they age collect white scarring, unique to each individual, which helps them to be identified

‘We believe the seas around Wales could be an important place for the Risso’s dolphin and this year’s unusual photograph of a baby Risso’s indicates that the Welsh coast may be even more important for the species than we previously thought,’ said Nia Jones, living seas manager at North Wales Wildlife Trust.

Meanwhile, the first orcas were spotted in Northern Ireland’s Strangford Lough since 1962.

People watched in awe as two orcas – killer whales – were seen in the large loch, which is southwest of Belfast.

One of them was recognised as ‘John Coe’, identified by the notch on his dorsal fin and the fact he is missing a chunk of his fluke. 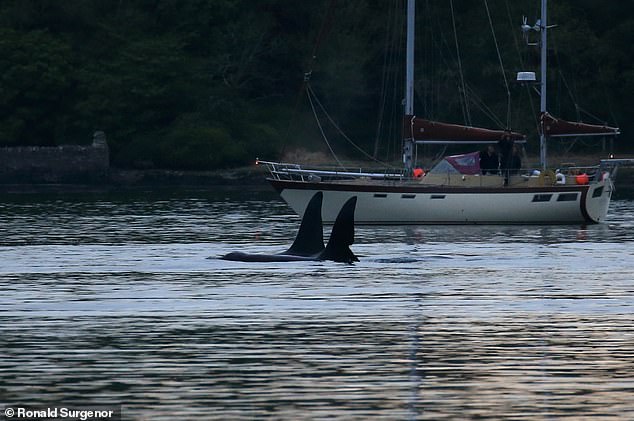 Orca pictured in Strangford Lough, the large inlet in County Down, in the east of Northern Ireland

‘This pod of elusive orcas tends to circuit the coast of the Hebrides and around Ireland most years, but rarely do they come close to the coast, which is why they’re hardly ever seen,’ said Heidi McIlvenny, living seas manager, Ulster Wildlife.

‘We were so lucky these intelligent mammals decided to take a detour and enter the lough this year.

‘Why they came to us this year, is yet another mystery of the deep.’

And more than 30 bottlenose dolphins were seen in playful displays off the coast of Teesside in August.

Jacky Watson, wilder coast officer, Tees Valley Wildlife Trust, said the sighting was a revelation for many local people who had no idea the animals could be seen in UK waters.

‘This partying pod of dolphins were highly visible, playing, breaching vertically, racing along at top speed with fin after fin arcing through the waves,’ she said.

Extraordinary numbers of Atlantic bluefin tuna were also seen hunting along the length of the south coast over the summer and autumn. 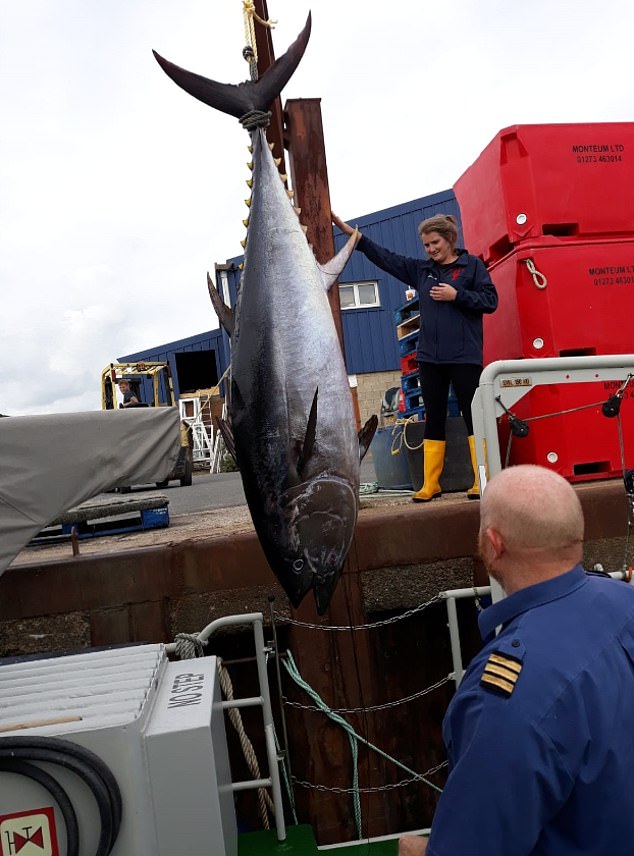 Bluefin tuna, Chichester Harbour, Sussex. Extraordinary numbers of Atlantic bluefin tuna hunted along the length of the south coast in a dazzling ‘run’ up the English Channel over the summer and autumn 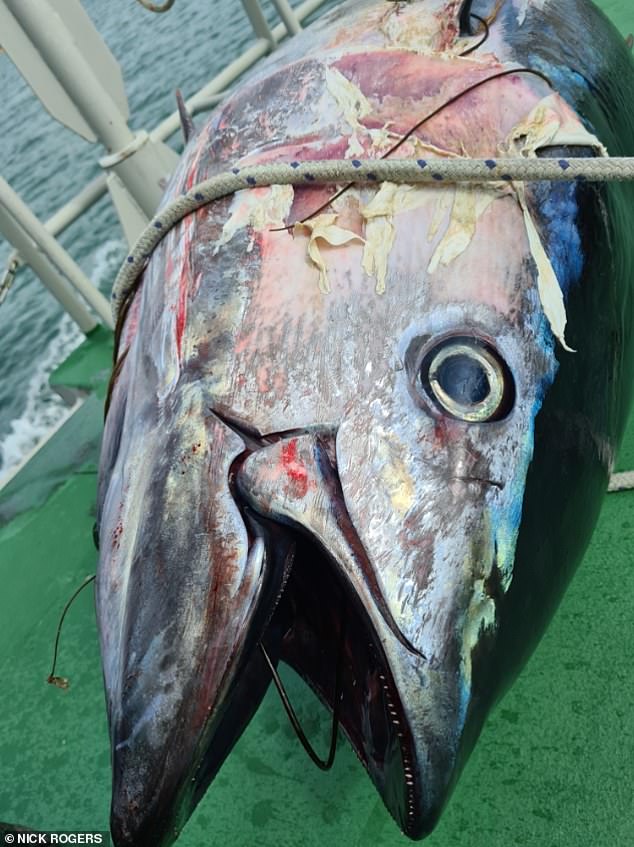 Bluefin tuna are still a fairly rare sighting in UK waters, but sightings have been increasing in recent years

Up to 10 feet long, these powerful fish can speed over 40 miles per hour as they chase shoals of mackerel, sardines and herring.

Bluefin tuna can live up to 40 years and weigh more than 250kg – about the same as three men – and this year were spotted from Cornwall and Devon in the west, to as far east as Folkestone, Kent.

At some points, the bluefin tuna were accompanied by porpoise, minke whale and dolphins, in a huge feeding frenzy.

‘No one who saw this intense display of the power, aggression and athletic prowess of bluefin tuna says they will ever forget it,’ said Abby Crosby, marine conservation officer, Cornwall Wildlife Trust. 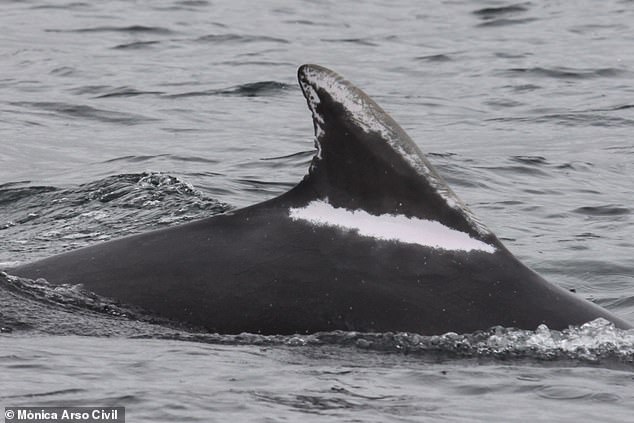 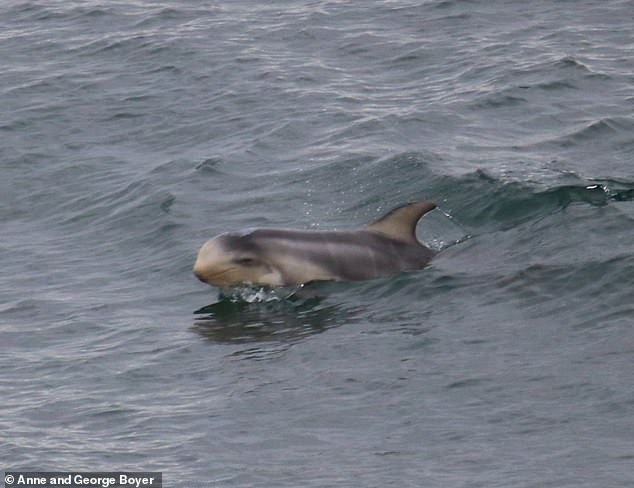 ‘People were utterly spellbound in anticipation of the next startling leap of these huge, metallic-silver creatures from beneath the ocean waves, and many simply couldn’t believe this was happening just off the English coastline.

Bluefin tuna are still a fairly rare to see in UK waters, but sightings have been increasing in recent years.

There was also an increase in minke whale and porpoise surveys carried out by members of the public in Yorkshire.

Minke whale-watching has established Yorkshire as a ‘marine eco-tourism hotspot’, the charity says. 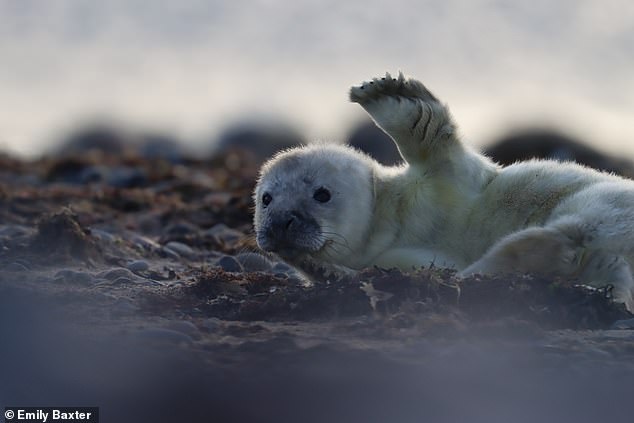 This photo shows an adorable grey seal pup giving a wave at South Walney Nature Reserve, which is home to the only grey seal colony in Cumbria 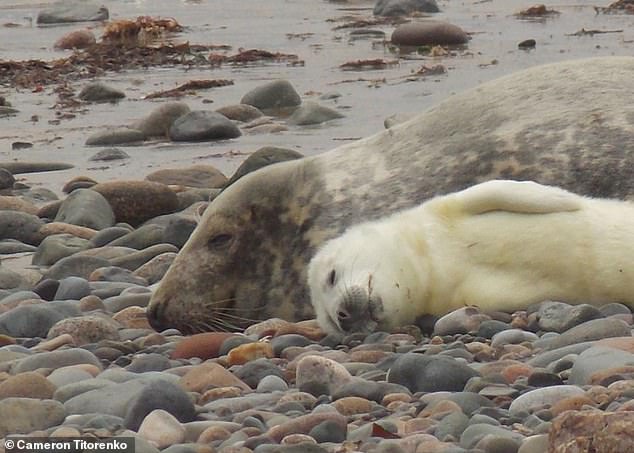 Grey seal pup and an adult at South Walney nature reserve. Grey seals are on the increase following ‘another successful year recorded around UK coast’ 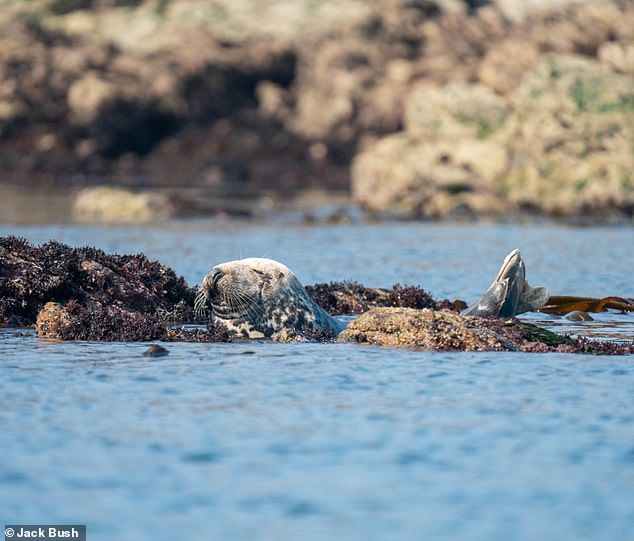 Pictured, a grey seal enjoying life in Alderney, the northernmost of the inhabited Channel Islands 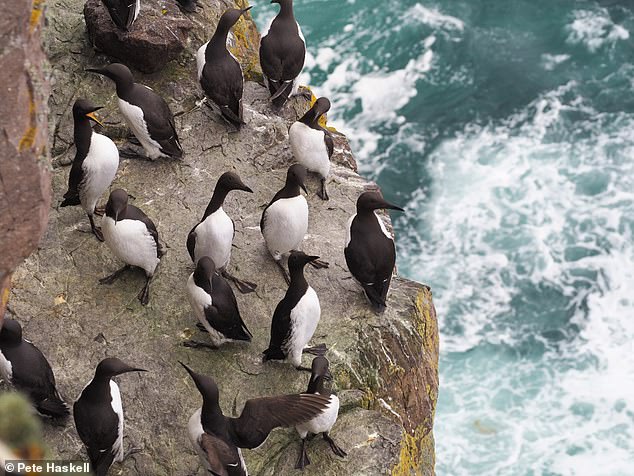 Guillemots on Handa Island. Based on data from 10 plots, sampling guillemots across the island of Handa, this bird species’ population has increased for the third consecutive year. 2020 witnessed the highest number of guillemots recorded on Handa since 2004. Guillemots breed on sheer cliff faces but spend most of their time out at sea 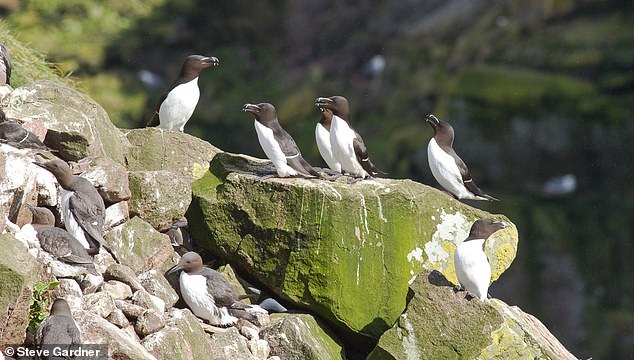 Guillemots and razorbills. Guillemots are a browner, chocolate colour, whereas razorbills are a blacker brown

Elsewhere, there was good news for grey seals with increases in numbers at colonies and pups in various parts of the UK, while guillemot numbers were at their highest seen since 2004 on Scottish Wildlife Trust’s Handa Island.

Based on data from 10 plots, sampling guillemots across the island of Handa, this bird species’ population has increased for the third consecutive year.

Additionally, there was a huge increase in Arctic terns and sightings of rare roseate terns at Cemlyn, the bay on the northwest Welsh coast, overseen by North Wales Wildlife Trust.

In Lancashire, conservation action has established a new home for sand lizards, the UK’s rarest lizard, at Fylde sand dunes, where they are breeding for the first time since the 1960s.

The sand lizards re-introduction is part of an ambitious conservation plan for the Fylde Sand Dunes Project, which has involved restoring the dunes themselves.

The restored dunes are now better able to support more wildlife, but also to provide protection against coastal flooding.

The species had suffered enormous declines in population due to habitat loss, urbanisation and ‘coastal squeeze’ – intertidal habitat loss.

‘It may still be our rarest lizard, but this bright green jewel of a creature deserves to be back home in the north.’ 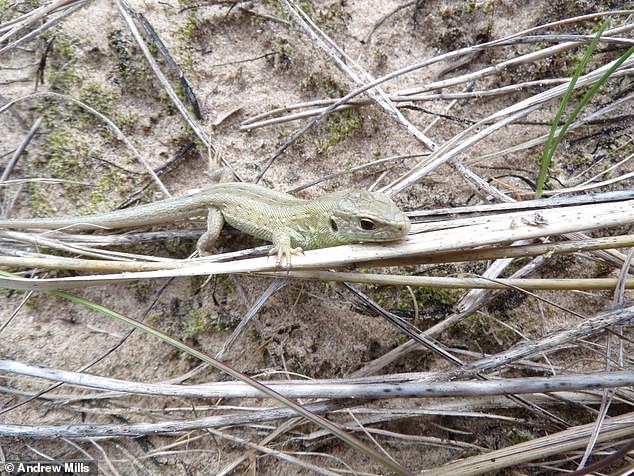 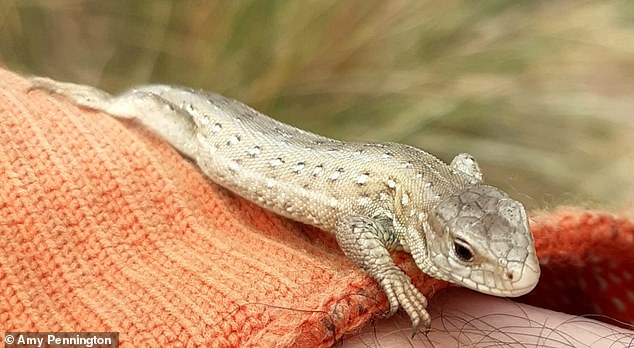 Sand lizard on a person’s arm at Fylde Sand Dunes, Lancashire, England. the lizards are breeding – thriving for the first time since the 1960s, thanks to the work of Lancashire Wildlife Trust

Lastly, Ulster Wildlife discovered a previously unrecorded seagrass bed of around five acres off the Ards Peninsula on the Irish Sea coast, providing habitat for wildlife and storing carbon.

The seagrass bed was found off the Ards Peninsula on the Irish Sea coast by Christine Picton, Ulster Wildlife’s Living Seas Officer, and volunteers.

There may be more vital CO2-storing seagrass beds around Ulster shores than marine scientists had previously thought, according to Wildlife Trusts. 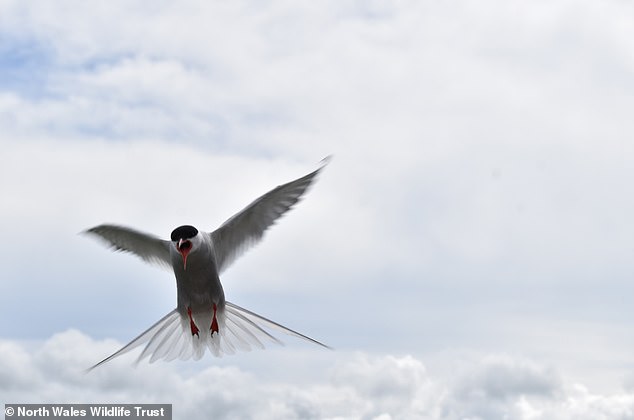 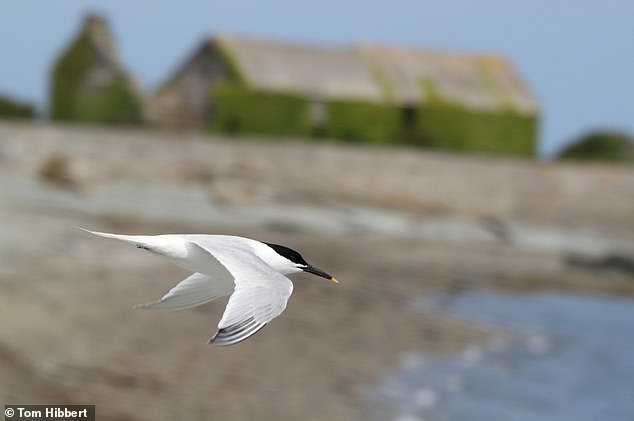 Sandwich tern at Cemlyn nature reserve. The Sandwich tern is a very white tern, with a black cap on its head, a long black bill with a yellow tip and short black legs. In flight it shows grey wedges on its wings tips and it has a short forked tail 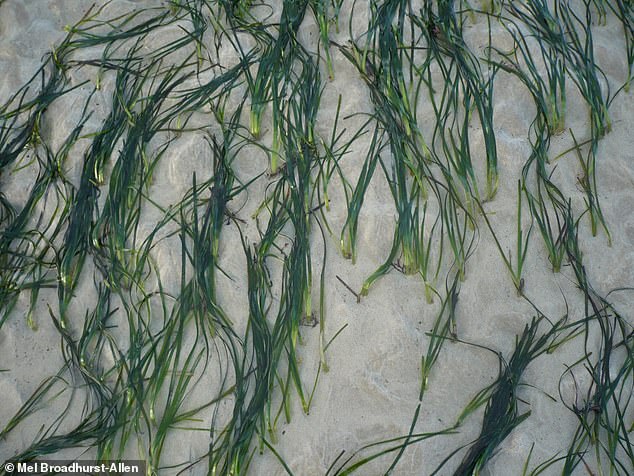 Seagrass, Alderney. Seagrass beds are home to a wide range of creatures including pipefish and anemones

– More than 30 bottlenose dolphins seen ‘partying’ off the Teesside coast