Steve Richards: It is a myth that a leader ‘taking on’ a section of their party reaps electoral dividends

Keir Starmer’s first speech to a proper party conference was unusually long. That’s fine. The duration was a form of release for him, a serious-minded leader trapped by a pandemic, finally securing an audience. Starmer adopted some techniques from the New Labour era, necessary ones if the party wants to secure wider appeal. But there was more radical verve than compared to the mid-1990s: a high-spending green new deal and the announcement earlier this week of the ending of charitable status for private schools being two emblematic examples. (David Blunkett almost lost his job as shadow education secretary after raising this possibility in the buildup to the 1997 election.) Starmer also claimed “levelling up” as a Labour issue, again with plenty of ammunition to do so.

He dealt well with the heckling and much of the media will praise him for his responses. But the two bigger UK parties are broad coalitions, always burdened by deep internal differences. It is one of the myths of British politics that a leader “taking on” a section of their party reaps electoral dividends. Labour leaders feel under considerable pressure to do so in a way that no Conservative leader does. Neil Kinnock’ s famous speech in 1985 when he challenged Militant tendency was an act of stunning political courage, but obscured a potent argument in the same address about the benevolent potential of the state, his counter to Thatcherism. The argument remained hidden. Labour was slaughtered in the election that followed. Unity or election victory is a false juxtaposition. An impression of unity is a precondition of election victory.

Starmer is a leader of integrity and substance, pitted against a PM he has called a “trickster”. This is potentially a compelling juxtaposition, but there is a risk for him that most voters will note only a troubled party compared with the deceptively united front on display at the Conservatives’ conference next week.

One good – very long – speech can’t win elections, but it can change
the weather. Hecklers, there were a few, but then again too few to bother him. Usefully Starmer could rouse the great majority in the crowd to drown them out – also a reminder of how he vanquished the Corbyn remnants this week.

He’s no natural barnstormer but his strength was always to be the
serious contrast to trivial Boris Johnson, ready when the public tires
of that clown-showman’s knavish tricks. The themes were strong, if
familiar, but he made them his own: crime and security, which belongs to the chief prosecutor; work, forged by his toolmaker father; and the value of care, impressed upon him by his nurse mother.

Surprises? We saw genuine emotion from a shy man – the trustworthiness and the seriousness are already priced in.

And no one can call Labour policy-free now, with more radical plans than anyone expected. Blairite? In fact there was nothing like the extreme Blair/Brown caution when approaching the 1997 election – though the homage to all they achieved in power was long overdue. He may not use the word, but if socialism is the language of priorities, as Aneurin Bevan said, he rightly put the climate emergency top of his bill: that eye-watering annual £28bn green investment proposal strips bare the fakery of Johnson’s no-plan targets. Working rights and mental health were eloquently promised, with a lyrical pledge for arts and sport and outings for children. His call to “Make Brexit work” will stick, as the nation queues for petrol.

Few but political obsessives notice conference speeches, but messages percolate out over time. By mysterious osmosis people will know Starmer better after this week, and they’ll be a step closer to envisaging an alternative prime minister: the longer chaos reigns around the country, the more they need one. Here begins the rebuilding of trust after Labour’s great calamity at the last election.

Zoe Williams: Those who backed his campaign in the first place had hoped for more

Starmer’s speech revealed three critical weakness – the first rhetorical, the second programmatic, the third both. But it wasn’t without merit. With long, impassioned personal stories, the Labour leader resituated the ideas of crime and security around the killing of a young woman by her violent ex-partner and the murder of Stephen Lawrence – thus managing to knit together his lawyerly image of punishing the wrongdoer with the anti-sexist, anti-racist values of the crowd. He pulled off something else, too: “Let’s get totally serious about this,” Starmer told a conference hall that was itching, at this point, to stand up (though whether in ovation or escape it was genuinely hard to say): “We can win the next general election.” The end of his statement was unspoken – “so long as you lot pipe down” – yet somehow almost everybody managed to get it.

But Starmer is still genuinely uncomfortable talking about himself. In the early days of his leadership, those with his ear used to plead with him to show more of his background. Starmer still finds this toe curling, and though he has finally been persuaded of its necessity, he goes at it with a sincerity that is over-baked and painful to watch. “The eye on the object,” was how he repeatedly distilled his father’s craftsmanship. It was meant to mean something, but in God’s name, what? Honest, working people, staring at things; those are Labour Values.

Second, there was a large amount of Blair tribute act (antisocial behaviour? We’re seriously going back there?), fleshed out with Blair in-jokes (“education – I’m tempted to say it three times”). Giving a speech to Labour members, to signal to non-Labour members that you’re no longer in hock to the members, using jokes that only a Labour member would ever laugh at: it was all dense with irony.

Third, Starmer’s speech had a kind of Men-in-Black effect. It wiped the mind of any memory of what you wanted to hear and replaced it with nothing that anyone would disagree with, creating a kind of self-cleaning brain where ideas go to vanish (the exception was his name-checking Rachel Reeves’s speech on Monday, which was ambitious). Probably even Boris Johnson, in his cups, would agree that Starmer would make the better prime minister. So “better than the other guy” was his pitch – but those who backed his campaign in the first place had hoped for a bit more than that.

Moya Lothian-McLean: Only concrete action will convince the wider public that he’s a tool for their betterment

Keir Starmer’s conference speech was billed by his colleagues as the most important of his life. Although this suggests a degree of precariousness, Starmer delivered it from a comfortable position: he had used the past few days in Brighton to carry on the job of purging the left.

His demeanour illustrated this: Starmer spoke confidently and empathically, though he wasn’t quite able to embody that all-too elusive charisma, even with a few gags. His stall was set out early. He began by “[welcoming] home” former MP Louise Ellman. This week, he said, Labour had got its “house in order” and could now get on with the business of opposition.

Just what that business looks like to Starmer has so far been muddy. He ascended to leadership by promising socialism and party unity via 10 pledges. His speech omitted name-checking, although several points could have potentially won over the left wing of his party – if he hadn’t spent a year alienating them. Framing his political motivation through his upbringing – “I am not from a privileged background” – Starmer laid out a commitment to working people. Under Labour, a fully funded NHS – with 8,500 new mental health workers – would shift from emergency care to prevention, he said, and the party would pursue the Green New Deal policy that he’s been accused of abandoning.

He was even confident enough to throw jabs at SNP leader Nicola Sturgeon (perhaps not the smartest move to regain lost ground in Scotland). But regular heckles from the listening delegates reminded us that much of his rhetoric was just that – talk. Starmer’s actions have contradicted much of what he professes to stand for. References to NHS pay and fair wages were met with cries about Starmer’s limp response to the question of pay for nurses in England earlier this year – as well as jibes of “£15 an hour”.

“Shouting slogans or changing lives?” was Starmer’s response to one heckler, which served only to highlight that he has yet to convincingly do either. Finishing up on yet another reference to his toolmaker father, the Labour leader walked off to a standing ovation. But only concrete action will be enough to convince the wider public that he’s a tool for their betterment, rather than just another cog in a failing political machine. 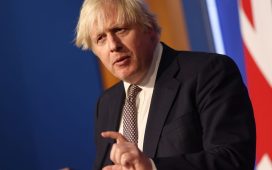 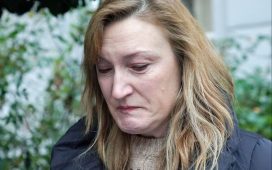 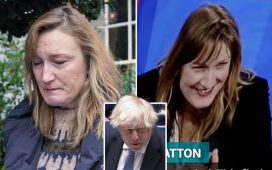