Ancient Greek has no word for blue. Latin comes closer, with the etymology of our modern term cerulean, though the relationship between hue and word is precarious. Certain Celtic languages make no verbal distinction between blue and green, and the Himba people of Namibia apparently do not perceive one at all. What colour is blue?

Artists, who might be expected to have an open-minded attitude, can be oddly dogmatic. For Renaissance painters, the Virgin’s robes are ultramarine. Picasso’s Prussian is the colour of grief, while for Kandinsky pale blue is the transcendent infinity of heaven.

Raoul Dufy’s The Mediterranean is a hot cobalt, as if the days were never overcast. Indeed, Dufy praised blue as the one colour “which maintains it own character in all its tones”. But what does that mean, and is it even true if blue is to signify sorrow, infinity, the sea and the colour of latex hospital gloves?

There is a hand wearing just such a glove in this exhilarating show, online at Victoria Miro from next week. It appears in a 2020 painting by the Indian artist NS Harsha, delving into deep blue waters in a flow of cleansing bubbles. Harsha was working in lockdown. The glove is both mundane and symbolic, ordinary and glorious in its protection of life. This is the way Harsha thinks, and paints: finding the celestial in the everyday.

The show takes its title from a large pastel by Paula Rego, which in turn derives from a Portuguese story in which a boy, believing his father to be the sea, goes in search of the shore. On reaching the water’s edge, the boy immediately dies and assumes the colours of water and sky.

Rego’s image shows Gustonesque waves beneath a glowing empyrean, and the boy – or is he a man? – lying cruciform on the sands. It is a deposition by other means, and those means involve blue. Sea and sky, after all, only appear blue because of the divine mysteries, so to speak, of light.

Chris Ofili’s painting Crowning of a Satyr (Blue) weaves its mythology out of different blues. The satyr is brownish gold, with curving horns; the female figure doing the supposed crowning, with a mermaid-like tail, is a translucent aqueous blue, swirling in darker hues. What is sea, what is sky, which way is downwards? Blue, here, holds wild powers of disorientation.

Chantal Joffe’s potent portrait of her daughter, Esme, aged around nine or 10, shows her rising above the stiff competition of a new skirt in deepest ultramarine. Esme is trying to keep it together, one arm tight across her body, but the colour she has chosen (or so one guesses) is out to upstage her. This is a portrait of motherhood too, full of the insight and empathy young daughters may resist.

Not much that occurs in nature is blue. The colour is expensive, and not just in the days when ultramarine was made out of ground lapis lazuli. Blue pigments and dyes are still hard to create (including this year’s “new” blue, which was actually discovered in 2009 but has taken that long to fix and manufacture). The painter Idris Khan’s Rothko-like abstraction, where bars of dark, inscrutable script reverberate against a rich blue ground, appears opulent as well as numinous. It’s a fine balance between the luxurious colour and the unspoken words.

Khan, as well as veteran US abstractionist Howardena Pindell, Danish conceptualist John Kørner and the Belgian painter Ilse D’Hollander, one of whose mesmerising landscapes is included here (blues singing all the way from meadow to shore), are all represented. This is a colour-themed showcase for the gallery’s roster of artists. But each work makes such different use of blue, and to see them together is to sense the prodigious emotional, visual and conceptual potential of this colour.

The American painter Milton Avery was a master of blues and yellows. Colour had a special value in his art, almost independent of what it described. In the 1963 portrait Two Poets a greenish-blue fills the whole canvas like atmosphere, decor or contained air. The artifice of the colour, too, immediately suggests an interior, possibly that of Avery’s Manhattan apartment.

Nobody knows quite which poets they were – Avery had many writer friends – but they fit together like interlocking pieces of a puzzle. And all around them flows this sonorous, low-toned blue that might, one senses, exist as a chromatic parallel to their poetry. Though it also forms a third character in the painting. A red plant pot appears nearly orange against this particular blue, in the ever-changing nature of this colour.

Blue has a life in language – blue-eyed boy, blue blazes, out of the blue – that has at times only a tangential connection with hue. It is the colour of sadness, but also of a summer’s day, volatile in its range of moods and metaphors. The idea of blue as having no connotations whatsoever – International Klein Blue, say – is comparatively recent, and still unusual. The poet AE Housman irrevocably connected it to memory.

And so it is in one of the smallest but greatest works here, Celia Paul’s tiny painting Steve in His Rowing Boat, Austria. Steve is far below Paul in the lake, her brush (like his oars) creating its own waves and ripples. The blue remembered mountain opposite rears high up to meet a liquid blue sky. In the perfect circularity of the scene, all is tuned to blue, even Steve’s boat. The whole vision, inward and outward, is as condensed as a sonnet.

The big picture: the decline and fall of a utopian social housing scheme 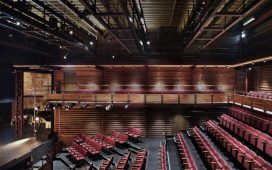