ASIA/CHINA – “Me and my seminary”: the seminary in Beijing celebrates 40 years of commitment to priesthood formation 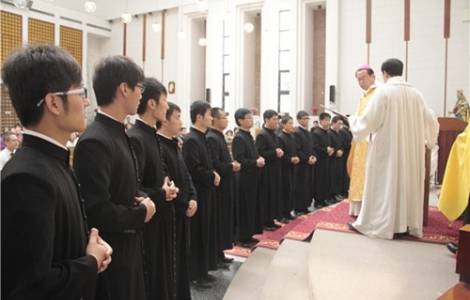 Beijing (Agenzia Fides) – “Me and my seminary” is the theme of the competition organized for the seminarians of the diocese of Beijing, on the occasion of the 40th anniversary of the founding of the Seminary. The competition took place on Sunday, November 21, solemnity of Christ King of the Universe, with a limited presence, due to sanitary measures, of priests, teachers and also lay people, who have always accompanied the vocational journey of seminarians through prayer and concrete help. The seminarians retraced the past, recounted the present and imagined the future, sharing certain themes such as “My personal history with my seminary”, “The seminary in my eyes”. … “Glory to the Lord, do good to the people, at the service of the people”: with this motto, the Seminary of the diocese of Beijing has covered a 40-year path in the formation of vocations, preparing priests for the diocese of Beijing but also for many other sister dioceses, especially in the peripheral and more remote areas. In fact, most of the seminarians who studied here are not from Beijing. Today, some have returned to their dioceses to carry out local evangelization, others have had the opportunity to continue their ongoing formation, even abroad, and still others are involved in the pastoral care of the parishes of Beijing.

In particular, the parishioners of the parish of Beijing dedicated to St. Michael – which was once the chapel of the seminary, then became a parish in 2003 due to the pastoral needs of the region, and also a place of pastoral formation for seminarians – consider seminarians as their children. From books to food, to fruit and vegetables: their offerings are not limited to the period of major feasts or to the Day for Vocations, but are daily, because they are convinced that the seminary is the heart of the diocese and the seminarians are the future of the Church.

During the last World Day of Prayer for Vocations, despite the fact that the physical presence of the faithful was impossible due to the pandemic, almost all the parish priests pledged to mobilize parishioners to spiritually and financially support the formation of vocations. In 1980, shortly after the reopening of the Church, the preparatory seminary of the diocese of Beijing resumed its activities in the small courtyard of the parish (then cathedral) of the Immaculate Conception, the church built by the Jesuit missionary, Father Matteo Ricci, after being closed for twenty years. She immediately welcomed a dozen young men eager to dedicate themselves to the Lord. In 1989 it was transferred to Beijing Cathedral, the Church of St. Savior, due to the increase in vocations, and again for the same reason, it was again transferred to another location in 1992.

Finally, in 2001, the construction and opening of a modern complex of 476 square meters. In addition to ordinary courses for seminarians, the seminary also hosts many formation courses for nuns and lay people, as well as university activities, since the area where the seminary is located is called the “university district” of Beijing.

According to the statistics provided by the seminary to Agenzia Fides, the seminary in Beijing has formed more than 320 seminarians, not counting those who are expected to graduate during the current year, with 187 priestly ordinations and three bishops.