The pros and cons of giving Covid vaccines to UK children


Which vaccines against Covid have been approved for children?

Following successful trials, the Pfizer/BioNTech vaccine has been given approval in the UK by the medicines regulator for children aged 12-15. It is already approved for that age group in the US, Canada and the EU. The Moderna jab, which is made in a similar way, is also approved for children in the US. They can both be used for older teenagers, since the main trials involved young people over the age of 16. AstraZeneca is now trialling its vaccine in younger children between the ages of six and 17. It is currently approved only for over-18s.

Will we now see a vaccination campaign in schoolchildren?

Not immediately. The decision on whether to use the vaccines in children in the UK rests with the Joint Committee on Vaccination and Immunisation (JCVI), which advises governments. It’s not a straightforward decision scientifically as the risks and benefits for children are not clearcut. It’s also potentially fraught because of different interest groups. Teachers may want children to be vaccinated but some parents may be reluctant and not all doctors think it is a good idea. In the end, the decision will have to be taken by politicians.

What are the benefits for children?

Rather less than they are for adults because the vast majority of children generally do not suffer from severe illness when they get infected with coronavirus. A very small minority can get seriously ill from a complication of Covid called multisystem inflammatory syndrome. Although most recover, some have had longer-term mobility problems and mental health issues.

The families of disabled children have been keen for vaccination, because they have been shielding and would like to get back to school and a more normal life. But otherwise the main reason for vaccinating children is to protect adults, such as elderly grandparents, vulnerable relatives and teachers. Because all vaccines carry the small risk of side-effects, the risk-benefit equation is more complex with children.

High-risk children definitely need vaccination, says Adam Finn, professor of paediatrics at Bristol and a member of the JCVI, but “we need to know who they actually are”. Some have probably been shielding unnecessarily, he says, and urgent work should take place to sort this out. Doctors can in extreme circumstances vaccinate a vulnerable child at their discretion.

There weren’t any major side-effect issues in the children’s trials but they were done in several thousand children – not hundreds of thousands. You don’t see very rare side-effects until you start using vaccines in whole populations. The US has been vaccinating large numbers of children recently, so there should soon be some real-world evidence to look at. In adults, there have been rare cases of blood clots with low blood platelets with the Oxford/AstraZeneca and the Johnson & Johnson vaccines, and those have been a bit more common in younger people. There have also been cases of myocarditis – a heart condition – with the Pfizer/BioNTech jab in Israel. There’s no reason to suppose there will be problems in children, but it’s a bit early to be sure.

Do we actually need to vaccinate children?

Some say not. They point to Israel, which vaccinated such a high proportion of adults that it eliminated cases in children. But we need to stop children being excluded from school and missing out on education, which happens whenever somebody in a class tests positive. Lately there have been reports in schools of the Delta variant, which originated in India and is more transmissible than other variants in the UK. The variant may also cause more hospitalisations.

Are there enough doses to vaccinate schoolchildren?

The UK has ordered 400m doses in total, although not all are available and some of the vaccines are not yet approved. The priority at the moment is getting second doses into adults to ensure they have the best possible protection against the Delta variant in areas where it has taken off.

Dominic Harrison, the director of public health in Blackburn with Darwen, one of the country’s Covid hotspots, has said they need more supplies and preferably a Twickenham-style mass walk-in vaccination effort to reach younger adults who are most likely to socialise and spread the virus.

But there is also the global need. No country is safe while the virus is unchecked elsewhere, with the likelihood of more and potentially vaccine-evading variants developing. There are calls for the G7 meeting next week in Cornwall to commit to sharing vaccine doses with lower-income countries for everybody’s sake. That would make vaccinating children a lower priority.

Education department challenged over support for One Britain One Nation day

Headteacher pinned boy to floor ‘for 30 minutes’ despite ‘horrendous’ screaming 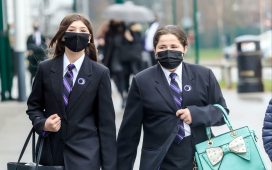