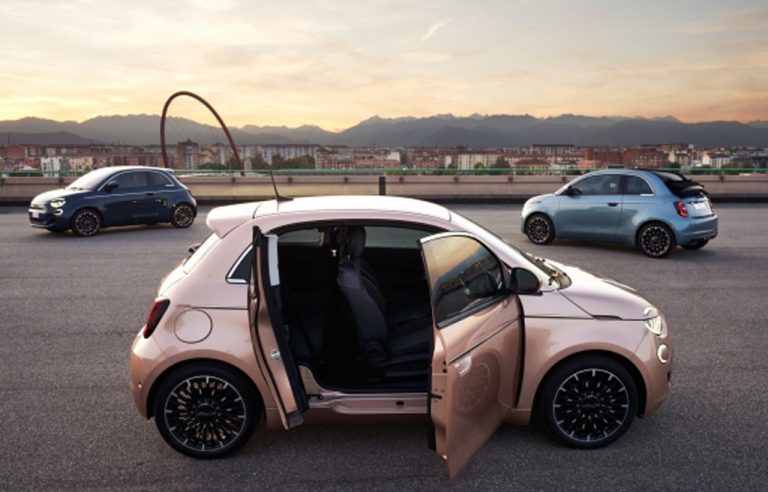 FULL pricing and specification of the 100 percent electric new Fiat 500 has been announced for the UK market.

The city car will arrive in UK dealers in early 2021 in both hatchback and cabrio bodystyles and with two battery options making it the longest range of any electric city car on sale today.

Priced from £19,995 on-the-road (inclusive of the government’s Plug-in Car Grant (PICG), the new 500 range is made up of three trim levels – Action, Passion and Icon.

The entry-level New 500 ACTION is fitted with a 70kW motor, accelerating from zero to 62mph in 9.5 seconds and with a limited top speed of 84mph.

The New 500 ACTION includes a lithium-ion battery with a 23.8kWh capacity, resulting in a range of more than 115 miles in the WLTP cycle, or over 150 miles in the city.

The New 500 ACTION is equipped with a 50kW fast charging system, so charging the battery to ensure enough mileage for the average commute takes less than 10 minutes.

Numerous ADAS features are standard with New 500 ACTION including Drowsy Driver Detection, to monitor driver concentration levels; Autonomous Emergency Braking, which along with other vehicles can also recognise cyclists and pedestrians; Lane Keep Assist, a system that alerts the driver to get back in lane when it detects any drifting; and Traffic Sign Recognition, which reads road signs and recommends the correct speed to drive at.

As for the exterior, the ACTION receives halogen headlights and 15-inch wheels. Inside, the entry-level version is packed with technology: from the auto-start button (Keyless Go), rear parking sensors and electric parking brake to the configurable 7-inch digital TFT colour screen in front of the driver.

The New 500 ACTION is available as hatchback only.

The mid-range PASSION version is available with the 42kWh battery. The 118hp motor has an output of 87kW, providing a maximum speed limited to 93mph and acceleration from zero to 62mph in 9.0 seconds and zero to 31mph in 3.1 seconds.

The New 500 ICON receives the same 42kWh battery as the PASSION trim level and receives another best-in-segment feature – a new 10.25-inch ‘cinerama’ touchscreen display, with integrated GPS and the infotainment system.

New 500 is now made up of three body styles, hatchback, cabriolet and now 3+1.

Designers have been working on a smart solution with identical dimensions to the cabrio and hatchback versions, but with a small third door on the passenger side. Just like the first 500 in 1957, which featured doors hinged to the rear.

The third small door opens in the opposite direction, and given the lack of a centre panel in the door itself, means rear passengers can jump in more comfortably and load and unload large items more easily.

It will firstly be introduced for left-hand drive markets and available here in December.