The Great British Art Tour: mystery of an old boy with a head for heights


George Mallory is perhaps the most romantic figure in the history of mountaineering. His disappearance close the summit of Mount Everest in 1924, dressed in tweed and wearing hobnail boots, became one of the great unsolved mysteries of the 20th century. He and his climbing partner, Andrew Irvine, were last seen about 800 vertical feet (245m) from the summit. Mallory’s body was discovered in May 1999, the location of Irvine’s remains are still unknown. Whether the pair reached the summit before they died remains a subject of speculation and continuing research.

Mallory was introduced to climbing at his school, Winchester College, and he is commemorated there by this memorial in the cloister beside the chapel. At its base is an inscription describing the moment Mallory entered thick clouds about 800 feet from the summit and was “lost to human sight between heaven and earth”. Above this is an image of Mallory on a rocky slope, which is partly covered with snow. He looks upwards, holding an ice axe and wearing goggles and an oxygen mask, with the distinctive profile of Everest in the background.

The scene is created from pieces of marble and limestone cut to shape and assembled like a jigsaw. This technique, known as opus sectile, was popular in ancient Rome and revived by the Arts and Crafts movement in Victorian England. It makes use of the natural properties of different kinds of stone to create artistic effects. Here, the texture of the limestone gives the figure of Mallory a suitably ghostly appearance, as if he were fading away into the mist.

Visitors to the school are often surprised by this unusual, modern-looking memorial, which contrasts so strongly with its medieval setting and the dozens of more conventional monuments in the cloister. It was designed by Reginald “Dick” Gleadowe, who came to Winchester as a pupil the year after Mallory and returned to the school as drawing master in 1923. Almost entirely forgotten today, Gleadowe was once a significant figure. He held the Slade Professorship at Oxford and gained a national reputation as a designer. His most important commission was the Sword of Stalingrad, presented by Churchill to Stalin in honour of those who had resisted the German siege of the city in 1943.

For Winchester College, he designed stained glass, silver and the lettering of inscriptions. The Mallory memorial is typical of Gleadowe’s elegant, linear style and his imaginative use of materials.

• You can see more art from Winchester College on Art UK here, and find out more on the school’s website. The Mallory Memorial may be seen on guided tours, alongside other items from the collections on display in Treasury, the school museum.

• This series is brought to you in collaboration with Art UK, which brings the nation’s art together on one digital platform and tells the stories behind the art. The website shows works by 50,000 artists from more than 3,000 venues including museums, universities and hospitals as well as thousands of public sculptures. Discover the art you own here.

The Great British Art Tour: Chagall leaves his dreams for a living nightmare

‘Creativity is essential’: artist-designed supermarket to open in London

‘I feel honoured I can help him tell his story’: the death-row drawings of Charlie Flannigan

The view from Bank Top: Craig Easton’s images of life in Blackburn 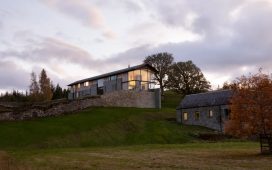