The Great British Art Tour: Chagall leaves his dreams for a living nightmare


This gouache, ink and pencil study in lilac and grey was executed in April 1945 by Marc Chagall after almost four years in exile in New York. He had fled to the US after the Nazi occupation of France during the second world war. Born into a Hasidic Jewish family in Vitebsk, Russia (now in Belarus), in 1887, Chagall arrived in Paris in 1910 and became a celebrated artist of the École de Paris, best known for his dreamlike paintings combining aspects of French tradition with Russian folklore and Jewish motifs. In 1923, he and his wife Bella became naturalised French citizens.

This was probably the first work that Chagall produced after coming out of mourning for Bella, who had died suddenly in September 1944 after almost 30 years of marriage. It was created in response to seeing the horrors of the concentration camps revealed through newspapers and Pathé newsreels. His pencil titles in Cyrillic (upper right) translate as “Apocalypse” and “Capriccio” (fantasy), and his biographer Jackie Wullschläger has described it as “the bleakest of Chagall’s many crucifixions”: combining symbolism with realism and incorporating factual information about the Holocaust for the first time.

The grandfather clock (a frequent Chagall motif) is missing its minute and hour hands, casting this moment in history as the end of time – the apocalypse. The naked figure of Christ wearing phylacteries on his head and arm and a flowing prayer shawl behind is clearly identified as a Jew, but also combines male and female attributes in a hermaphrodite figure symbolising both the male and female victims of the Holocaust. A bestial Nazi crouches at the foot of the cross. Below, a series of complex and horrific scenes uncover the extent of Jewish suffering during the Holocaust, among them another crucifixion, a hanging, skeletal camp victims amid burned buildings, and a boatload of refugees.

Little-known until purchased at auction – for a “bargain” price – in 2009, this powerful study has since become one of the museum’s best-known and most frequently requested works.

You can see more art from the Ben Uri gallery and museum on Art UK here, and find out more on the gallery’s website.

The pandemic captured in patchwork art – in pictures 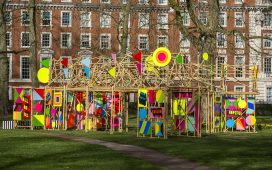