‘So bland and boring’: Nicole Kidman and Ansel Elgort’s The Goldfinch branded a ‘disaster’ in flurry of negative reviews after TIFF premiere

By Bobbie Whiteman For Dailymail.com

It premiered at the Toronto International Film Festival on Sunday.

And the reviews for the highly anticipated movie adaptation of author Donna Tartt’s Pulitzer-winning The Goldfinch are in.

But it seems not even star Nicole Kidman could save the ‘overlong movie’ from negative reviews and a slew of tweets pointing out the film’s failures. 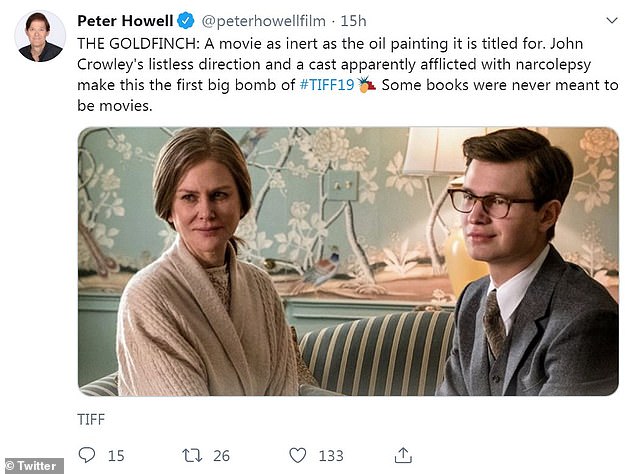 Not for him: Peter Howell of film score website Rotten Tomatoes called The Goldfinch, starring Nicole Kidman and Ansel Elgort,  ‘the first big bomb of #TIFF19’

In its review, show business bible Variety called it ‘a morose and downbeat movie, too lost in the maze of its designer seriousness.’

The Hollywood Reporter said it was a ‘disappointing adaptation of a great book,’ objecting to its attempt to pack the 784-page novel into the confines of a film, rather than a television series.’

The Goldfinch tells the story of Theo Decker, a 13-year-old boy who survives a terrorist bombing at a museum that kills his mother. 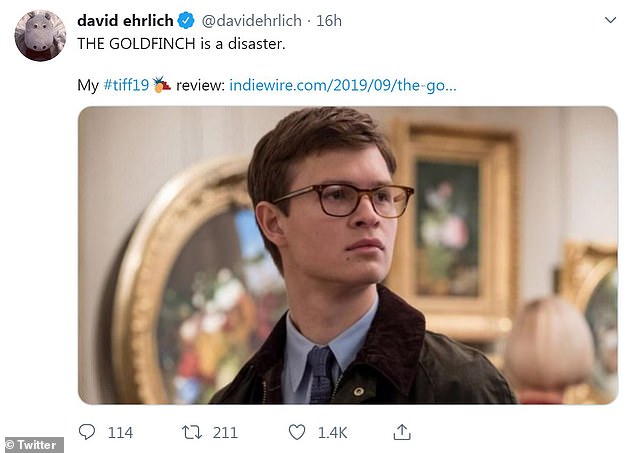 Critics at TIFF objected to its long running time of two hours and 30 minutes and general lack of excitement.

Yolanda Machado of film review site Rotten Tomatoes gave The Goldfinch a 29 percent fresh rating. She tweeted: ‘Ugh. THE GOLDFINCH was so bland and boring, I just. I really can’t say much other than nothing happens for almost 2 hrs.’ 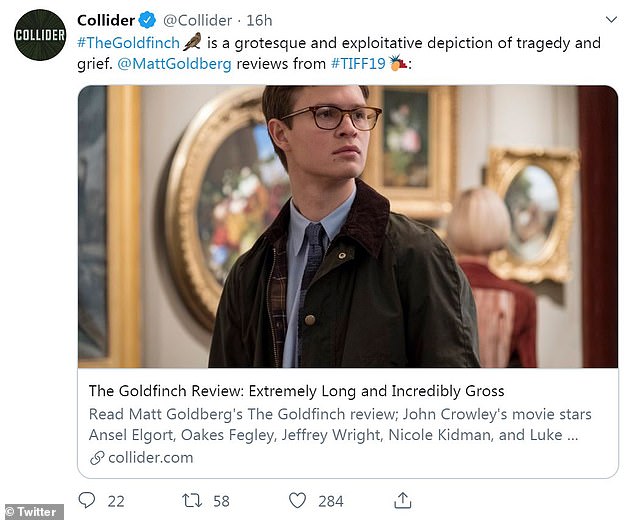 Picking up on the hate: Collider called the movie  ‘gross and exploitative’ 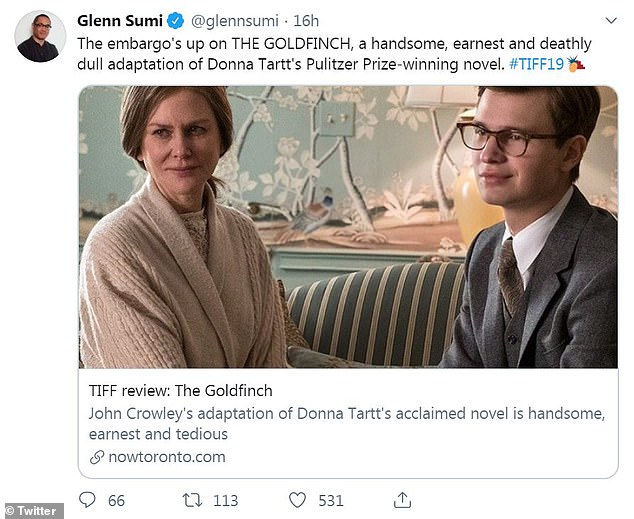 BuzzFeed’s Adam B. Vary called it ‘gorgeous and airless,’ and that director John Crowley’s adaptation had an ‘absurdly rushed and busy final act.’

In his review, Collider’s Matt Goldberg said The Goldfinch was a ‘tedious chore’ to watch, writing that while it aims to explore the complexities of grief and loss, it ‘lacks the style or substance to be anything more than a gigantic waste of time.

‘The film never wants to dive too deeply into anything, and instead just splatters a bunch of issues, characters, and emotions on the wall.’

However there was praise here and there for the cast trying to make something of Peter Straughan’s script.

‘The longest movie of the year’: That’s according to RogerEbert.com editor Brian Tallerico

His guess: NPR film critic Bob Mondello commented that the book the movie is based on ‘must be the silliest Pulizer-winner ever’ 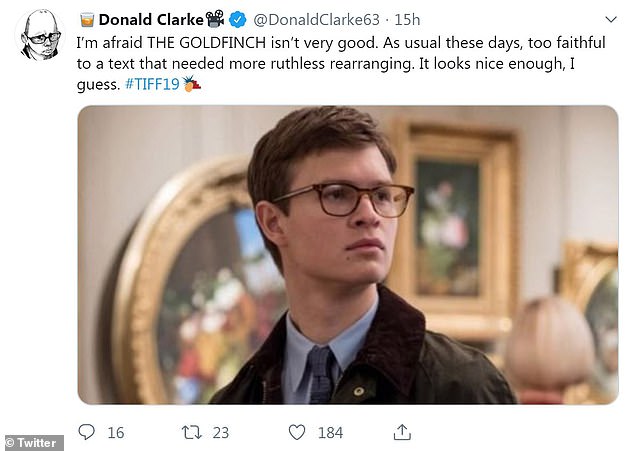 The Guardian’s Benjamin Lee praised Ansel for ‘quietly anchoring an uneven film,’ and also complimented Nicole for “another strong performance’ as well as co-star Jeffrey Wright.

BuzzFeed’s Adam B. Vary tweeted: ‘The actors all do what they can, and some — Finn Wolfhard, Sarah Paulson — manage to shake the film out of its chilly self-consciousness.’

And Vanity Fair commented:  ‘The Goldfinch is good but it could have been great

The Goldfinch is due to open on Friday. 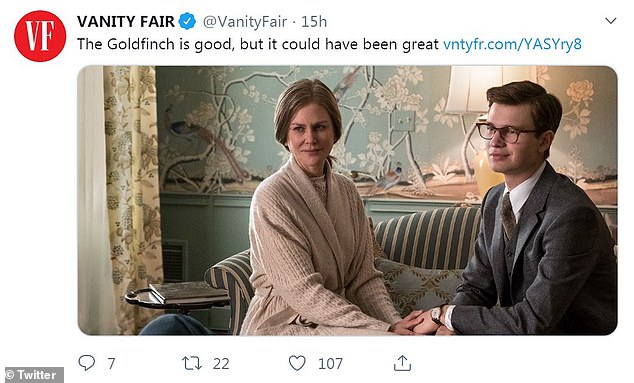 A few kind words: Vanity  Fair commented it’s ‘good but it could have been great’

The celebrities who are inspiring and entertaining during coronavirus lockdown