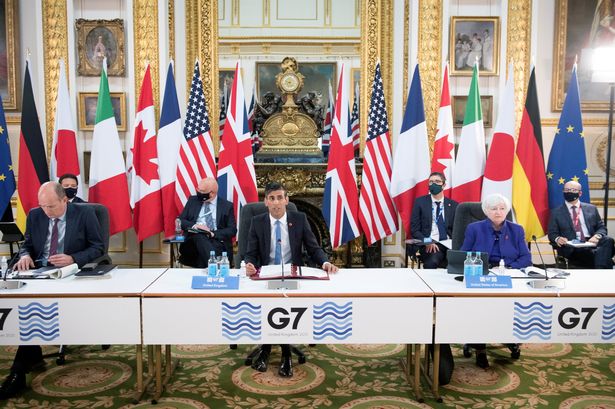 G7 nations account for about a tenth of the world’s population and around 46% of its GDP – but which countries are members? Here’s everything you need to know

The G7, or the “Group of Seven”, is often referred to as an alliance of the world’s leading industrialised economies: the US, the UK, France, Germany, Canada, Japan and Italy.

It held its first meeting in 1975, just two years after Britain joined the European Economic Community.

The G7 became the G8 in 1998 when, controversially, Russia was admitted.

But it was kicked out again in 2014 for Vladimir Putin’s illegal annexation of Crimea.

G7 nations account for about a tenth of the world’s population and around 46% of its GDP.

But the organisation does not include two of the world’s biggest and most populated countries: China and India.

In 2020, then US President Donald Trump called it a “very outdated group of countries”.

Rishi Sunak with G7 finance ministers at a pre-summit meeting
(

Host governments – in this case, Britain – can invite “guest” nations to summits.

This week, the leaders of India, South Korea, Australia and South Africa will be attending, some virtually.

While the leaders’ meeting is the headline-grabbing main event, there have been mini-summits of health ministers, finance ministers and foreign ministers in the run-up to the get-together in Carbis Bay.

The aim of the G7 is to thrash out plans for tackling the main issues of the age and reach agreement on a series of topics chosen by the host.

But it can only issue communiques and cannot pass laws.

Summits are often controversial and attract protesters keen to highlight their causes in the glare of the media spotlight.

Riots flared at the G8 in Genoa in 2001 when activists took to the streets to rally against globalisation.

Trouble also erupted at Gleneagles in 2005 when demonstrators tried to storm the summit compound.

But that meeting was overshadowed by the July 7 terror attacks on the London transport network.

Scotland had been the main focus of security preparations, but Islamist extremists instead targeted the English capital. Fifty-two innocent people were killed.