As Leicester City prepare for a crunch clash against Manchester United at the Old Trafford on Tuesday night, James Maddison might have imagined himself turning out in red rather than blue. Of course, they do call it the Theatre of Dreams.

The clash has quickly turned into a must-win game for Brendan Rodgers’ side, after failing to beat 10-man Southampton and a poor display in the 4-2 home defeat to Newcastle United on Friday.

Leicester have spent the entire season in the Premier League top four but with just three games to go, they face the possibility of missing out on being caught by the likes of Liverpool and Everton in the race for a Champions League spot.

With fixtures against Man United, Chelsea and Tottenham still to come, the Midlands outfit will be desperate for Maddison to rediscover his killer touch in front of goal.

The 24-year-old made a storming start to the season exemplified by a stunning finish in the Foxes’ 5-2 dismantling of Manchester City at the Etihad Stadium, but he has since gone off the boil.

Having gone from being courted by the Premier League’s top clubs to being dropped amid off-field controversies, his fall from grace is an intriguing one.

So, what happens next? Here, Mirror Sport takes a look at the curious case of Maddison…

As Manchester United ’s desire for a natural playmaker increased, it became obvious that Maddison would be at the top of Ole Gunnar Solskjaer’s list, along with Jack Grealish.

Solskjaer had pace in abundance in attack with Marcus Rashford, Anthony Martial and Mason Greenwood, but what the Norwegian really lacked was a creative menace, a No.10 who could feed the strikers and chip in with their own goals.

The pair were young England internationals with enormous potential and that ticked United’s boxes in terms of their preference to buy and develop British talent. But after being priced out by Leicester and Aston Villa, United turned their attentions elsewhere.

In January 2020, they got their man, spending £47.5m to snap up Bruno Fernandes from Sporting Lisbon. In assessing his 18 months in English football, the popular opinion would be they made the correct decision.

He signed a new contract until 2024, which seems to have all but ended his hopes of securing a big-money move. In United’s view, they may feel they are better off without him.

The season so far

It has been a fine campaign for Leicester and, until recently, for Maddison too.

Playing in behind Jamie Vardy and Kelechi Iheanacho in Rodgers’ favoured 3-4-1-2 setup, Maddison has enjoyed the freedom to roam and create chances behind the strike partnership.

The former Norwich man has played an influential part of their quest for Champions League qualification and their journey to the Europa League knockout stages, scoring 11 goals and registering 10 assists.

He was nominated for Player of the Month in January after scoring in four consecutive games only to be outvoted by Ilkay Gundogan after his goalscoring heroics for league toppers Manchester City.

But in the second half of the season, his form has nosedived. While on average he has delivered a goal or assist every 150 minutes in the league, only two contributions have followed since February 7.

If Leicester are to hold onto fourth spot and secure a place in next season’s Champions League, Maddison must find a way to rediscover the form he showed earlier in the season.

Maddison has had a number of issues to contend with away from the pitch, some of which have been self-inflicted.

Having shrugged off a hip injury in September 2020, the Coventry-born man was unfortunately suffered a recurring knee injury that kept him out of action in December and early January.

But the Foxes star only had himself to blame after finding himself in hot water with the club and Rodgers for attending a party with Ayoze Perez and Hamza Choudhury in April, while coronavirus lockdown measures were in place.

The trio were fined and dropped from Leicester’s lineup for the away clash with West Ham, which they went on to lose 3-2, and the club condemned the players for their “poor judgment”.

It is surely no coincidence his performances and reputation have taken a hit since the fallout from the incident. Now it’s up to Maddison to get back on track.

Gareth Southgate has the dilemma that all coaches wish to have: the difficult choice of picking a squad with a wealth of attacking talent available to him.

But the Three Lions boss faces a difficult call over whether to put his faith in Maddison when naming his 26-man squad for the Euros.

There is fierce competition for a spot in the midfield areas, with Grealish, Foden and Mount almost guaranteed of their places.

That leaves a group of players such as Maddison, James Ward-Prowse and Jesse Lingard in limbo as they desperately attempt to convince Southgate they are worthy of a place for this summer’s international tournament.

Eight goals and five assists in 28 league appearances puts the Leicester midfielder in the same bracket of effectiveness as Foden and Grealish, but his international team-mates are finding another level while Maddison struggles are laid bare.

Additionally, his withdrawal from international duty in November 2019 citing illness was not received well in the England camp. The fact he has only earned one cap since suggests he may miss out on the final squad. 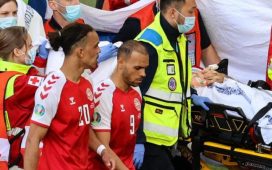 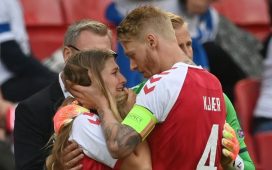 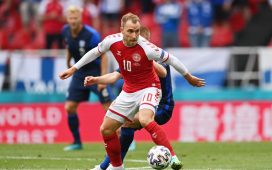 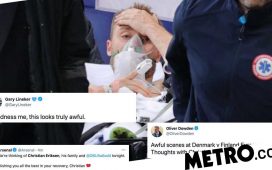