THE Chase’s Anne Hegerty is furious as her salary is slashed after a new Chaser joins the show.

The Governess, 62, revealed that the Chasers are only paid per performance so if another one joins their ranks then they all get less money.

This coupled with presenter Bradley Walsh’s busy filming schedule and the pandemic ruining filming, Anne is already feeling the squeeze.

After being asked on The Lewis Nicholls Show on YouTube whether she wants a new Chaser, Anne said: “This is a tricky one, because a lot of the public imagine that we are on the same sort of deal that Hollywood stars are in the 1930s.

“They got paid a salary per month, per year, and they were salaried employees at the studio and the studio would find them things to do for that salary. That isn’t actually how that works.

“We, The Chasers and Bradley, we get paid a flat fee for every fee that we do.

“So, any show that I’m doing, is a show for which I’m being paid and the other Chasers aren’t. And that applies to all of us.

“If you’re going to divide the shows by six rather than five, then, you know, do the maths.”

This comes after ITV announced a sixth Chaser: Darragh “The Menace” Ennis, a former competitor on the show.

She continued: “The problem is Bradley is, because he’s so in demand and so good, so superb at everything he does and can do so many different things, and so of course he’s massively in demand.

“And there’s about ten other things he’s doing besides the daytime Chase. A lot of the time we’ll find, ‘you know that filming block that was booked in, we are not filming that week after all’.

“It turns out, Bradley was doing another gameshow or something like that. And that’s a period of time where we aren’t working.

“Then obviously you add in a global pandemic and last year, because Bradley was still doing Doctor Who, we only recorded 93 shows. And we should’ve recorded twice that already.

“This year we were hoping to make up for it and do 150, 160, and then well that didn’t happen. So we hoped we will catch up in the spring but then again it all depends on whether Bradley’s available, it depends on a lot of whether one of these vaccines work out.”

The Chase is a British game show where contestants play against a professional quizzer who tries to stop the team from winning the prize.

A team of four individually attempt to rack up money for the prize pot, before any that made it through take on the Chaser at once. 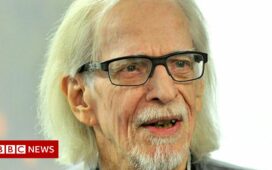