The Block star Darren Jolly has shared a worrying social media post hours after he was due to appear in court amid his messy marriage breakdown.

The 38-year-old former Block star was scheduled to appear before the Melbourne Magistrates’ Court on Monday where he faces multiple charges.

However, on Monday afternoon he went missing after putting up the extremely concerning post after 7pm.

‘I’m done, the unbearable pain of not seeing my beautiful girls for the last fourteen months is too much to cope with,’ he wrote. 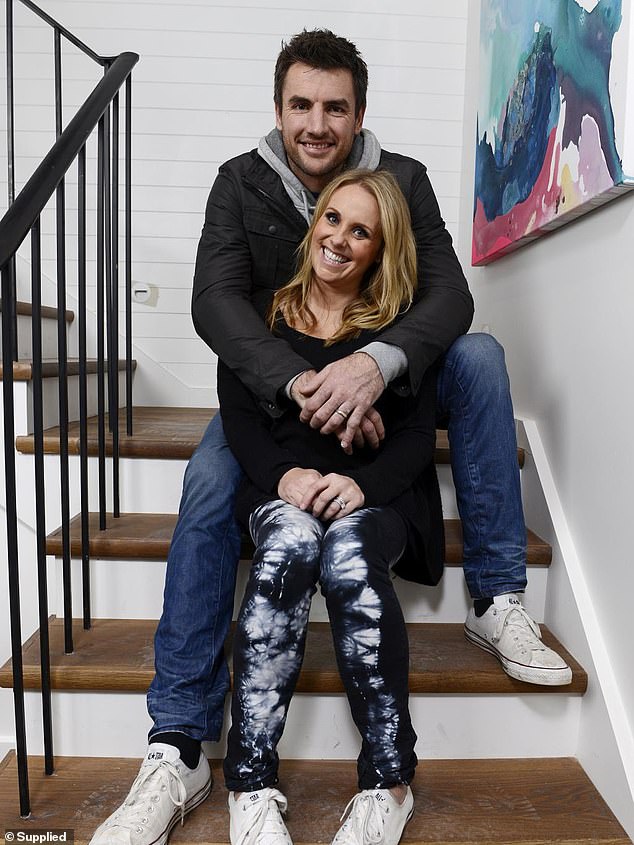 Sad split: Darren Jolly claims he hasn’t been in contact with his two daughters ‘for months’ after splitting from his wife, Deanne, in September. Pictured together on The Block

Jolly shared a photo of himself with his two daughters and lamented that he was unable to see enough of them, and the pain it caused him.

‘Looking back through these photos broke what little I have left of my heart as it showed how much my girls loved me,’ he wrote.

Jolly wrote that he had reached breaking point and said he ‘can’t go on any longer’.

‘To my parents, my family, my friends, Lucy, I love you. To my girls, I’m sorry. My love will always be in your heart. Love Dad xx.’

Worried friends pleaded for help on social media on finding Jolly after he disappeared.

‘Jolly has been in a depressed state, and police have not been able to find him,’ one wrote. 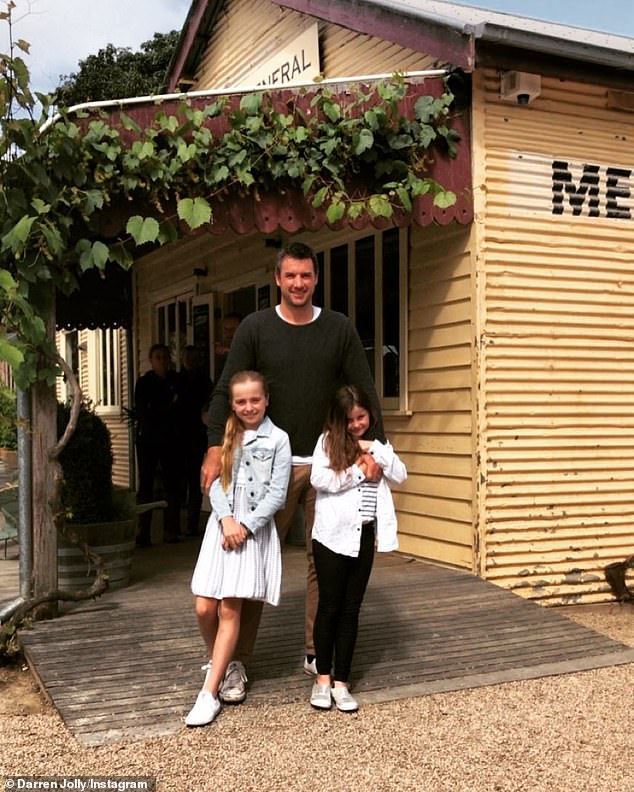 Missing his girls: The 38-year-old former Block star claimed in an Instagram post on February 20 it had been ‘months’ since he’d last spoken to his children, Scarlett and Lily (pictured)

About 8.30pm, another friend said Jolly had been found safe and well and thanked everyone for their help in sharing calls for help finding him.

Jolly’s matter was expected to be adjourned off along with thousands of other criminal hearings as Melbourne’s struggling court system continues to fight its way through the COVID-19 pandemic.

Daily Mail Australia also revealed on Monday that Deanne faces near identical charges to her ex, with a hearing scheduled to take place at Ringwood Magistrates’ Court on Thursday.

The nature of the charges cannot be published due to legal reasons.

Darren and Deanne had announced their split in September last year after 15 years of marriage.

Darren has made no secret of his battle with mental illness since the split.

In February, he spoke candidly about his business troubles and the breakdown of his marriage at AFL club Collingwood’s annual general meeting.

‘Spending three weeks in a mental facility to deal with depression. Leaving my 15-year marriage because I fell out of love and wanted a happier life,’ he said at the time.

Darren told his former team mates his mental health became so bad around that time that he ‘almost did something stupid and ended [his] life’.

At the depths of his struggle, he admitted himself to hospital and described it as the ‘best thing [he] could have done’.

It was the same month Darren claimed he hadn’t been in contact with his two daughters Scarlett and Lily ‘for months’.

‘To my daughters, I miss you like crazy and just want to hold you,’ he posted on Instagram.

The couple had been popular contestants on Channel Nine’s renovation series The Block, appearing twice in 2014 and 2015, and winning the latter season.

In a statement to the Herald Sun last year, Deanne confirmed the pair’s acrimonious split and claimed Darren had been the one who instigated it.

‘This is a very difficult time for me and my girls. We have been blindsided and left devastated by Darren’s action. But I’m focusing on my two daughters, who are my number one priority,’ she said at the time.

He shared a quote that read: ‘The truth always comes out in the end no matter how hard you try to hide it or stop it. Lies are just a temporary delay to the inevitable.’ 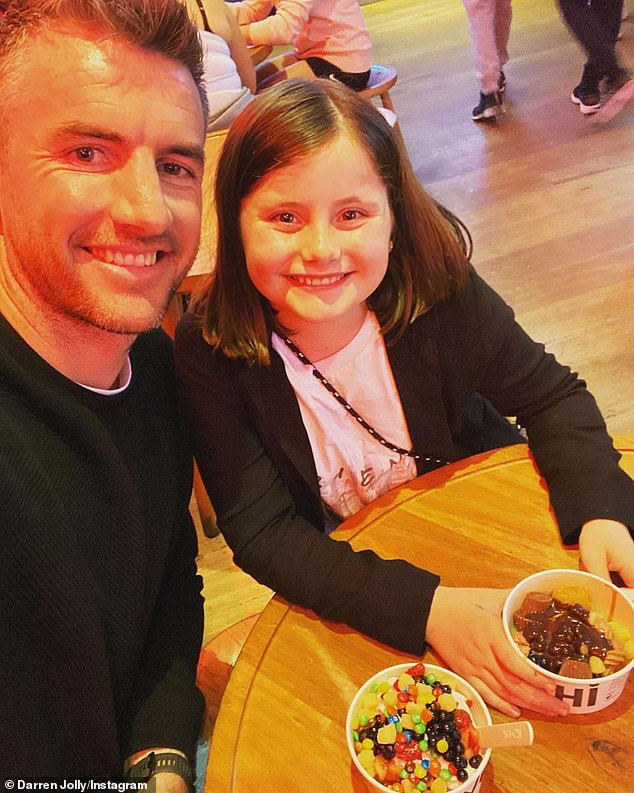 ‘To my daughters, I miss you like crazy and just want to hold you,’ he wrote. Pictured with Lily

In a post on Instagram in November, Darren claimed he had fallen into a ‘dark hole’ following his marriage breakdown.

‘To everyone who helped put me in that hole, go f**k yourself,’ he added.

Darren had been a champion AFL footballer for Melbourne, Sydney Swans and Collingwood before becoming a reality television star.

In the months before the couple split, he lost a staggering 16kg and underwent a complete body transformation.

The duo’s arguments became infamous during their time on the Channel 9 series, and the pair previously opened up about their sometimes turbulent relationship in their audition tape to appear on the show. 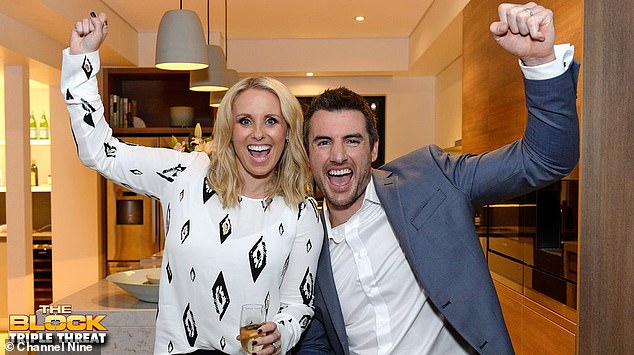 Reality bites: Darren and Deanne were popular contestants on Channel Nine’s renovation series The Block, appearing twice in 2014 and 2015, and winning the latter season

Darren noted: ‘She can be short… she can snap.’

Back then, Deanne remained confident that nothing ever got malicious, adding: ‘We don’t mean to say anything that’s mean’.

Despite all their hard work in the 2015 season of The Block, Darren and Deanne walked away with a profit of just $10,000.

They bounced back the following year, taking away a whopping $935,000 after they returned to take part in The Block: Triple Threat.

That sum made them the show’s biggest winners in history. 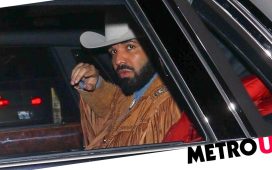 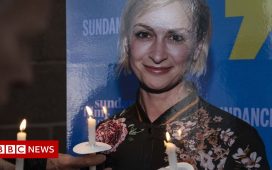 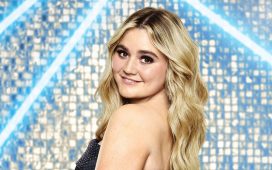