Coronavirus cases are rising in all but 17 areas of England, official data shows, after the same figures last month showed that the number of infections was falling in most corners of the country.

Statistics released by Public Health England (PHE) reveal that 132 out of 149 parts of the country have all seen an increase or no change in infections since the start of September.

Sunderland’s weekly infection rate — the number of cases for every 100,000 people — soared seven-fold during the start of the month, from 8.3 to 59.8.

Bolton, currently considered England’s Covid-19 hotspot, saw its infection rate nearly double over the same time-frame to 122. Other areas in lockdown, such as Bradford, also suffered a spike in cases.

The data comes amid fears a second wave is beginning in Britain, with tighter social distancing rules from today banning people from meeting in groups larger than six.

Such is the concern about the rising numbers of cases – the average number of people testing positive each day has doubled from 1,500 to 3,000 in the past 10 days – that Prime Minister Boris Johnson and his chief advisers held a press conference last week to warn that the disease is surging among young people.

But the most up-to-date statistics from PHE reveal a handful of authorities, including Bedford, Buckinghamshire and Cambridge, have yet to experience the same spike in cases.

There is no clear trend among areas with falling infections: boroughs ranging from London to the South West to Norfolk to Manchester all feature.

This week’s data is less promising than that for the end of August, however, when 76 out of the 149 local areas (51 per cent) had recorded a drop in their infection rates. 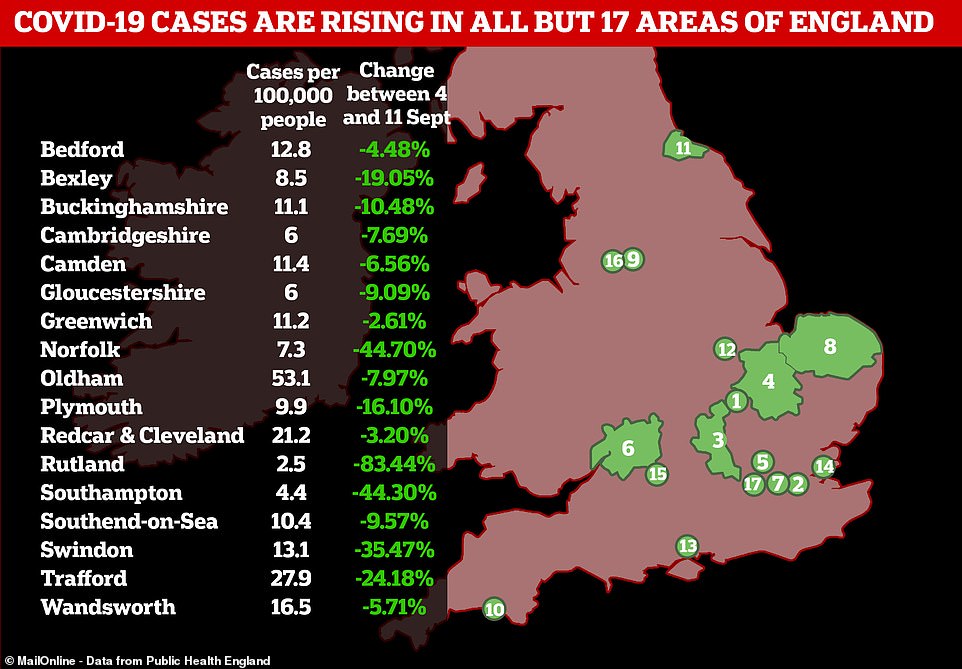 Covid-19 infection rates declined in only 17 areas of England between September 4 and September 11 (pictured), while cases were on the rise everywhere else in the country, Public Health England data showed 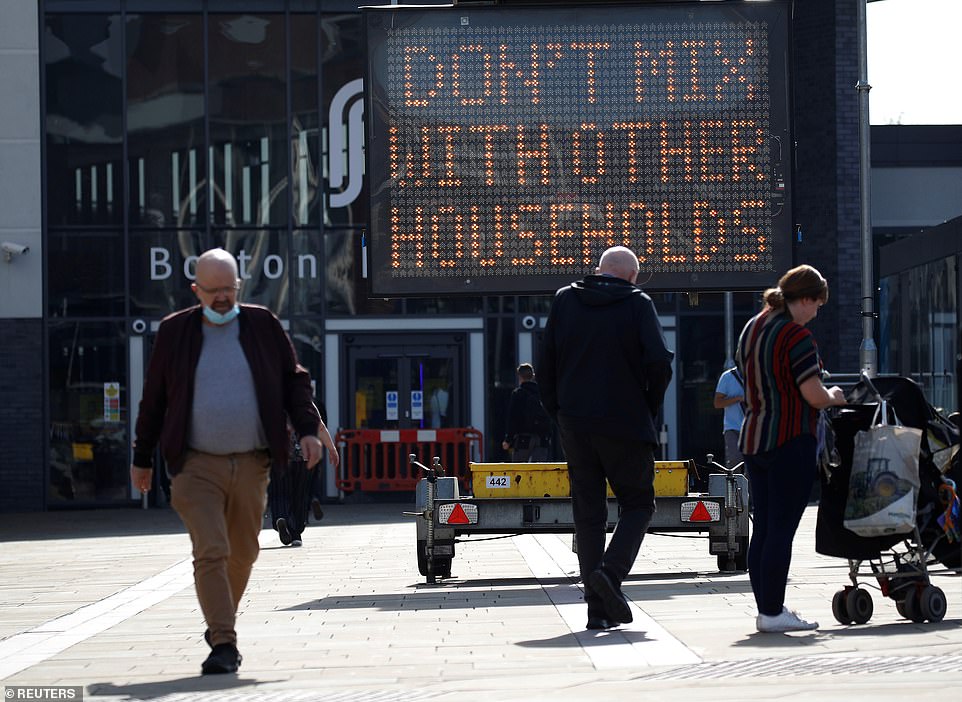 People walk past an information board following the outbreak of the coronavirus disease in Bolton, Britain, September 14

Covid-19 was on the up in all other areas of England, the data released on Friday night showed.

While the rates of infection were rising in all areas, most still only had low levels overall.

More than half of places – 86 out of 149 – have levels of coronavirus lower than 20 cases per 100,000 people, which is the threshold at which the British Government starts to consider international quarantine for visitors returning from other countries.

WHERE ARE CASES RISING THE FASTEST?

WHERE ARE CASES FALLING THE FASTEST?

There are now 49 areas on Public Health England’s watchlist, according to its weekly report, which rounds up areas where officials are concerned about outbreaks.

The list is significantly longer than it has been in previous weeks, with many areas in the north and Midlands populating it, as well as increasing numbers of places in Norfolk in the East of England.

‘NO TESTS AVAILABLE’ IN COVID-19 HOTSPOTS

No walk-in, drive-in or postal coronavirus tests are available for people suffering from symptoms of the disease in England’s ten outbreak hotspots, it was claimed today.

Swabs are not available in Bolton, which is fighting the largest outbreak of the virus in the country with an infection rate of 168 cases for every 100,000 people.

The Government website where testing slots are booked also shows there are no tests available in Salford, Bradford, Blackburn, Oldham, Preston, Pendle, Rochdale, Tameside and Manchester, according to LBC radio.

READ  DR MAX THE MIND DOCTOR: Yes, IBS is tied to the mind, but that's no reason to dismiss it

When postcodes in each area are put into the testing system it allegedly comes up with the message: ‘This service is currently very busy. More tests should be available later.’

It comes as Nicola Sturgeon today accused the UK government of trying to limit the number of slots available for testing in Scottish mobile and regional test centres. 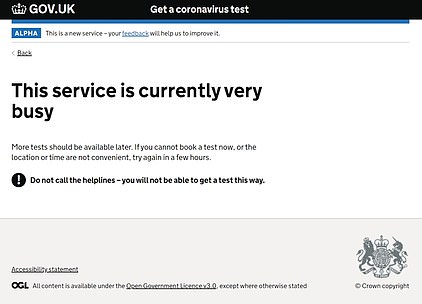 She said the Health Secretary had made the request after telling her a ‘demand issue’ had led to a reduction in test availability.

LBC’s Westminster correspondent Ben Kentish said that when people tried to get tests in any of the ten areas, they were not offered one.

‘The government testing website simply says the service is very busy and people should come back in a few hours,’ he said.

‘We tried to get a test in the top ten areas. In all ten they were unable to get any sort of tests in any of the ten areas.’

All the ten areas that currently do not have tests available are listed by Public Health England as the areas of England with the biggest coronavirus outbreaks.

There were concerns last week that bad situations in a small number of areas are scaring politicians into making sweeping decisions about curbing people’s social lives all over the country.

Some cities’ inability to control infections – Leicester has had some level of local lockdown now for more than two months, while cases in Bolton are high and rising at 122 per 100,000 – may have caused health chiefs to push for stricter social distancing rules across the entire country.

A ‘rule of six’ was today written into law, allowing police to fine anyone caught socialising in groups of more than six people unless they all live together.

A Conservative former minister last week criticised the measures as a ‘very broad brush’ and said that something ‘more concentrated’ would have been better.

David Jones MP told MailOnline: ‘I can understand that the Government has to do something, because there is certainly an uptick.

‘But it is not an uptick across the country as a whole. There are some parts of the country such as Devon, Dorset where there is very little virus activity at all.

‘So it does seem to be very broad brush… I would have thought something more concentrated would be better.’

Mr Jones’s comments came as a data analysis showed that some 38million people were being lumped into tighter lockdown rules coming in today, with Prime Minister Boris Johnson last week urging people to ‘limit social contact’ in a televised speech reminiscent of the darkest days of Britain’s crisis.

READ  Yes, it's still hard for dads to talk about condoms with sons

And an analysis of postcode data by The Telegraph showed 75 per cent – or 5,157 areas – had a lower rate. Around 7,200 people are estimated to live in each postcode, which when multiplied gives 38 million.

The UK’s coronavirus outbreak is mostly being driven by cases in hotspots including Greater Manchester, Lancashire, Birmingham and Leicester, with many areas in local lockdown measures or receiving extra Government support.

Hundreds of towns and villages all over the country have managed to keep their coronavirus cases low but will still be subject to the draconian new measures.

Rural areas in the South West, for example, have escaped the worst of the virus’s impact for most of the outbreak but are still being subjected to the tough rules faced by the rest of the country.

Christopher Snowdon, the Head of Lifestyle Economics at the Institute for Economic Affairs, said the Government had ‘over-reacted’ to a rise in cases by bringing in the draconian measures.

‘Figures show that the (coronavirus) problem is still quite highly localised, despite what was said yesterday,’ he told MailOnline at the timje. ‘I look at the map where you can check outbreaks and, in my neck of the woods, there are huge stretches of land where there are less than two cases.

‘It suggests to me that local lockdowns or local restrictions are still the best way forward and the broad brush approach is, at best, premature.

‘I think the Government has maybe decided to bring in this “Rule of Six” because it will have a smaller economic impact than closing pubs or schools, but there will be an economic impact. You can’t have more than six people in a group in restaurants, for example.

‘I know the hospitality industry is very concerned. (They) are still trying to balance the economy and risk to some extent, but they got the balance wrong.’ 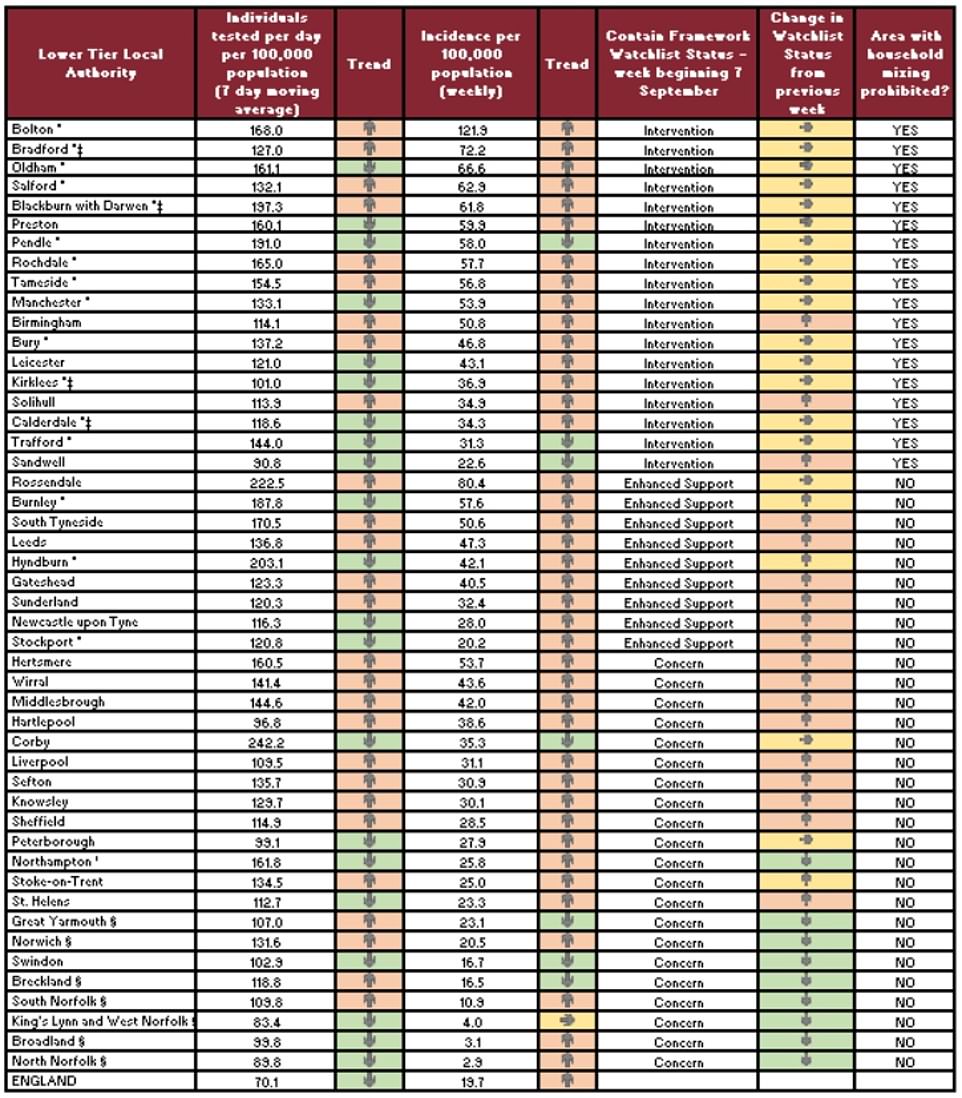 Public Health England’s watchlist has now grown to include 48 areas of concern which have varying levels of interventions, from just enhanced surveillance to increased testing or tighter social distancing or lockdown rules 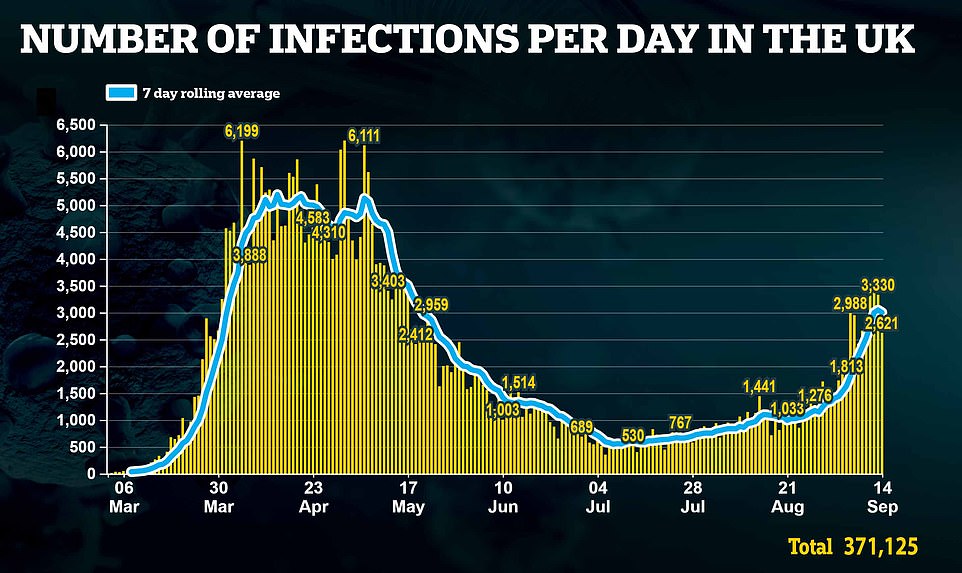 How to sleep: Drink this herbal tea before bed to improve sleep quality

Arthritis treatment: Avoid this type of food to ‘reduce inflammation and restore defences'

Chancellor Rishi Sunak defends Eat Out to Help Out scheme

'Stark warning to us all': UK reports record daily number of Covid cases

'Our gut bacteria could guide us to cures for major diseases'

With special needs, one size does not fit all | Letters