Tesla rolled out version 10.3 of its Full Self-Driving (FSD) Monday morning after CEO Elon Musk pulled the software over the weekend after discovering issues.

The electric carmaker initially rolled out the system Saturday evening that improves the ability to detect turn signals, creeping speed and other features.

However, Musk tweeted on Sunday morning that issues within the update were discovered and vehicles would be put back to version 10.2 temporarily.

‘Please note, this is to be expected with beta software. It is impossible to test all hardware configs in all conditions with internal QA, hence public beta,’ the CEO tweeted.

It appears Tesla has now rectified the issue, as Musk tweeted ’10.3.1 rolling out now’ at 6:02am ET on Monday. 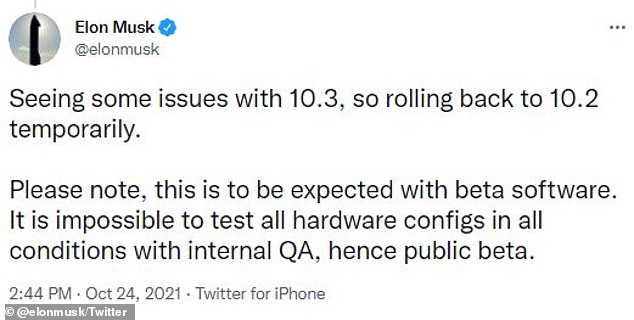 Tesla rolled out version 10.3 of its Full Self-Driving (FSD) software Saturday evening that improves the ability to detect turn signals, creeping speed and other features, but hours after the launch, Elon Musk announced it had been rolled back

Tesla’s FSD is available to drivers with high safety scores of 100 out of 100.

These scores were decided by drivers giving the firm permission to monitor their driving using in-car software. The scores will be ranked per 100 miles of driving.

Musk pointed out issues on Saturday night shortly after the rollout, specifically problems with ‘left turns at traffic lights.’

However, it appears Tesla rectified, as Musk tweeted ’10.3.1 rolling out now’ at 6:02am ET on Monday 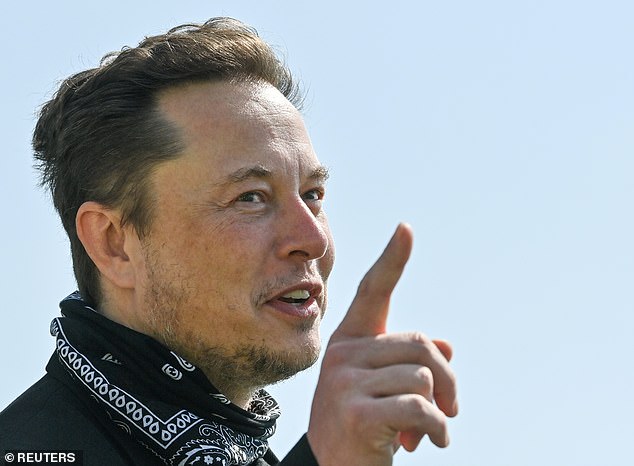 Elon Musk (pictured) shared all the updates about the software launch, roll back and re-launch on Twitter

However, Tesla owners found other problems that also dropped their safety scores.

One owner tweeted: ‘@elonmusk is it a known issue in FSD Beta 10.3 to have false collision warnings? My first day with it off AP I got two [consecutive] warnings but car was 25yards away traveling at same speed. Was [swerving] tho. Dropped my score to 98 :(’

Other drivers also saw their points drop, though it is not clear whether these individuals still qualified for version 10.3.

Along with the aforementioned issues, some Tesla owners reported the roll back disabled the FSD software entirely – resetting it to non-FSDBeta production. 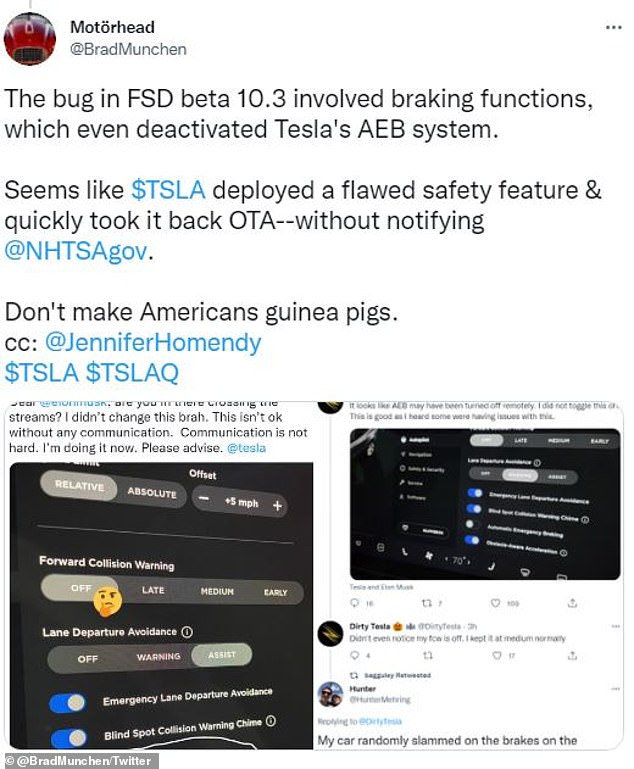 Tesla released its FSD system as limited beta software to select US drivers in October 2020, which sparked controversy among industry experts who claimed the term ‘Full-Self Driving’ is misleading and puts motorists at risk.

Steven Shladover, a research engineer at the University of California, Berkeley, who has studied autonomous driving for 40 years, said in a statement: ‘This is actively misleading people about the capabilities of the system, based on the information I’ve seen about it.’ 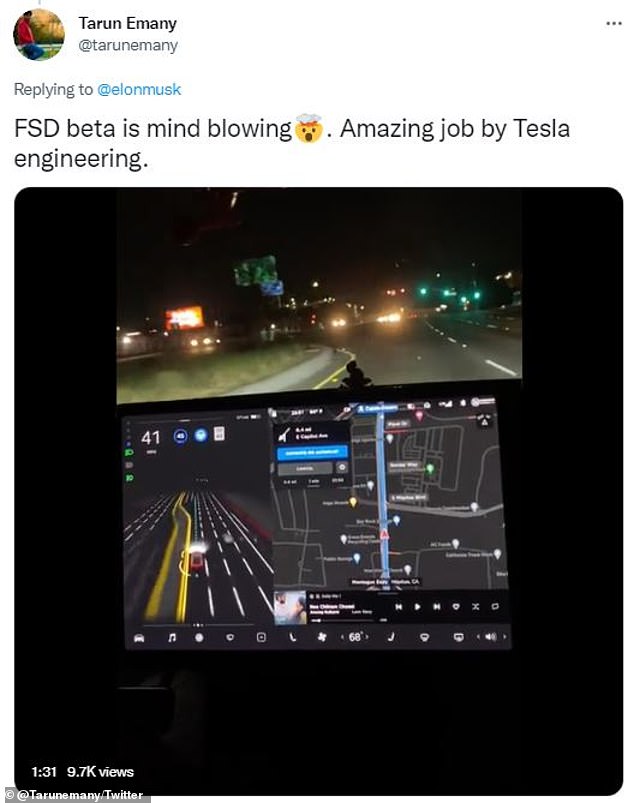 However, users were pleased with the technology once issues were fixed and the updated rolled out again

‘It is a very limited functionality that still requires constant driver supervision.’

In September of this year, the National Transportation Safety Board ​(NTSB) also called the software ‘misleading and irresponsible,’ The Wall Street Journal reported.

NTSB head Jennifer Homendy, who pushed for a delay in the FSD beta software, said: ‘Basic safety issues have to be addressed before they’re then expanding it to other city streets and other areas.

‘It has clearly misled numerous people to misuse and abuse technology.

Self-driving cars often use a combination of normal two-dimensional cameras and depth-sensing ‘LiDAR’ units to recognise the world around them.

However, others make use of visible light cameras that capture imagery of the roads and streets.

They are trained with a wealth of information and vast databases of hundreds of thousands of clips which are processed using artificial intelligence to accurately identify people, signs and hazards.

In LiDAR (light detection and ranging) scanning – which is used by Waymo – one or more lasers send out short pulses, which bounce back when they hit an obstacle.

These sensors constantly scan the surrounding areas looking for information, acting as the ‘eyes’ of the car.

While the units supply depth information, their low resolution makes it hard to detect small, faraway objects without help from a normal camera linked to it in real time.

In November last year Apple revealed details of its driverless car system that uses lasers to detect pedestrians and cyclists from a distance.

The Apple researchers said they were able to get ‘highly encouraging results’ in spotting pedestrians and cyclists with just LiDAR data.

They also wrote they were able to beat other approaches for detecting three-dimensional objects that use only LiDAR.

Other self-driving cars generally rely on a combination of cameras, sensors and lasers.

An example is Volvo’s self driving cars that rely on around 28 cameras, sensors and lasers.

A network of computers process information, which together with GPS, generates a real-time map of moving and stationary objects in the environment.

Twelve ultrasonic sensors around the car are used to identify objects close to the vehicle and support autonomous drive at low speeds.

A wave radar and camera placed on the windscreen reads traffic signs and the road’s curvature and can detect objects on the road such as other road users.

Two long-range radars on the bumper are used to detect fast-moving vehicles approaching from far behind, which is useful on motorways.

Four cameras – two on the wing mirrors, one on the grille and one on the rear bumper – monitor objects in close proximity to the vehicle and lane markings. 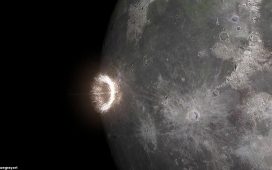