Let’s settle a few issues right up front. Pickup trucks have been defined in exactly the same way for almost 100 years, with a three-box design encompassing a hood, a cabin, and a bed. In fact, it takes just seven lines to draw their rudimentary shape: up, across, up, across, down, across and down. Now comes the Tesla Cybertruck, trying not only to disrupt the industry, but to do so in perhaps the most undisruptable segment on the planet.

From a business perspective, it makes perfect sense that Tesla wants to take a crack at the largest and most profitable segment in the U.S. As unique and jarring as this new offering is, there are plenty of examples in our collective automotive memories of distinctive trucks trying to shake up the establishment. Models like the Chevrolet Avalanche, Ford Explorer Sport Trac, Hummer H2 SUT, GMC Envoy XUV, and even the Pontiac Aztec offered unique answers to questions of practicality—even if many of those questions had been previously unasked.

The problem, of course, is that when talking about this particular segment, these buyers (especially full-size-pickup buyers) are some of the most risk-averse and brand-loyal purchasers around. Maybe no other vehicle makes this point better than the polarizing first-gen Honda Ridgeline, which in order to survive had to move to a somewhat more traditional pickup-truck look for its second go-around.

Why We Buy Trucks

To fully understand why full-size pickup trucks (and to a certain extent, full-size SUVs) are so popular, you have to know their buyers. Generally speaking, these folks have to carry big families, while some pull heavy trailers, others haul loads in the bed, and many need a vehicle that can serve for both work and play.

In addition, although these particular buyers may understand the tradeoffs they’re making better than buyers in any other segment, they are the least interested in making any compromises. Some buyers get a full-size vehicle so they can’t be prevented from doing something they might want to do in the future. They’re acutely aware they have to make sacrifices in, say, comfort and fuel economy, but they ultimately don’t want their vehicle choice to be the thing that limits their options on weekends, for vacations, or during a DIY project. Getting back to the Cybertruck, possibly the biggest hurdle it needs to clear is this: Most truck owners don’t have much experience driving electric car—they just see compromises. Add a big amount of weight in the bed of an already heavy electric truck and, as with any vehicle, you lose range; add a heavy trailer and you lose more range. Now add in extreme high or low temperatures and your range drops again. Whether the actual loss of range in these circumstances would be significant enough to impact their day-to-day usage is, for some potential buyers, meaningless. For a new-truck buyer, perception is reality.

Even so, quite a few design and engineering aspects of the Tesla Cybertruck could resonate with old-school and modern truck buyers. There’s no question the exterior design is meant to recall both futuristic and recognizably militaristic (meaning function-first) outlines. The hulking size with bulging shoulders and massive wheel arches imply a confident, special-forces-style stance.

More tangible and traditional “pickup” activities like hauling and towing could be a sticking point for quite a few truck buyers, but the Cybertruck’s 14,000-pound max towing capacity could help, not to mention a few specially devised real-world on-the-road hauling and towing demonstrations. As you might expect, electric vehicles don’t drive like traditional trucks at all, but even the most jaded truck buyer understands the value of being able to carry several thousand pounds or tow like a three-quarter-ton pickup.

It Has a Bed

The single most defining characteristic to any work truck is the bed area and much of the Cybertruck’s success or failure will hinge on Tesla’s understanding of what buyers want from their cargo area. A very wise engineer once told us, “Show me the bed of any pickup, and I’ll tell you how its maker expects buyers will use it.” In this highly competitive arena, the more versatility, the more use. The Cybertruck’s bed looks in some ways to be the largest in the segment—there are no intrusive wheel-well bumps—but we have no doubt there will be discussions as to whether it’s more of a pickup truck or an SUV with a massive, covered cargo area (isn’t that a trunk?). With the stainless-steel bed cover closed, it offers huge lockable storage, and when open there are several tie-down points and hidden storage bins to make any gear-heavy bike, motorcycle, snowmobile, or ATV hauler quite happy. As versatile as the bed might be, the cover does create issues for those who might want to add roof racks to accommodate even more lifestyle gear, something quite popular with outdoorsy buyers.

Other aspects of this new truck that could prove problematic for skeptical truck buyers are underneath. First off, Tesla decided to go with five-lug wheels, which implies it’s less capable and less rugged, and with lighter-duty axles and hubs, than six- or eight-lug options. After a quick talk with their lead engineer, we were told this was more a of a practical decision, due in large part to their use of five-lug wheels on the current-gen Model X, which could expand wheel choices for both vehicles down the road.

Another possible sticking point for some traditional truck buyers could be the four-corner air suspension (a stronger version of the system used on the Model X), typically chosen to deliver carlike ride quality when passengers are the most frequent payload, as well as better handling dynamics and capabilities. As of today, the vast majority of full-size pickups and SUVs are suspended with either steel leaf or coil springs, usually tuned for heavier loads. Of course, this issue could be minimized by the fact that many big-rig Class 8 over-the-road haulers use primary or supplemental air-ride setups, as well as some global HD military troop carriers.

In fact, putting the Cybertruck on a lift could impress many skeptics, who will see the long-travel droop of the massive four-wheel independent A-arms the air suspension allows, as well as the beefy substructure surrounding the front and rear electric motors. Nothing says HD or bulletproof like a subframe of tubed steel. Not only will those electric motor casings provide physical protection—they look as if they’re ready to push logs and pieces of granite out of the way when navigating deep Alaskan river crossings—but the adjustable ride height will deliver plenty of ground clearance over obstacles as well.

With so many companies getting ready to jump into the electric-truck market (Atlis, Bollinger, Havelaar, Rivian, Workhorse, and more, to say nothing of GM and Ford), and Ford just releasing its Mustang Mach-E electric SUV, there couldn’t be a better time for Tesla to drop a monstrous, military-looking machine into the deep end of the pool. We’ll know much more after we get a chance to thoroughly test this truck in all the proper ways, with all the proper loads. More to come. 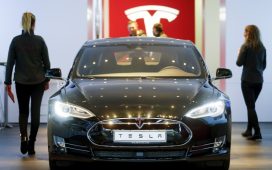 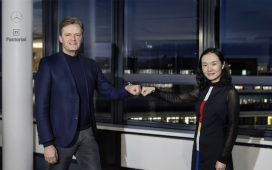